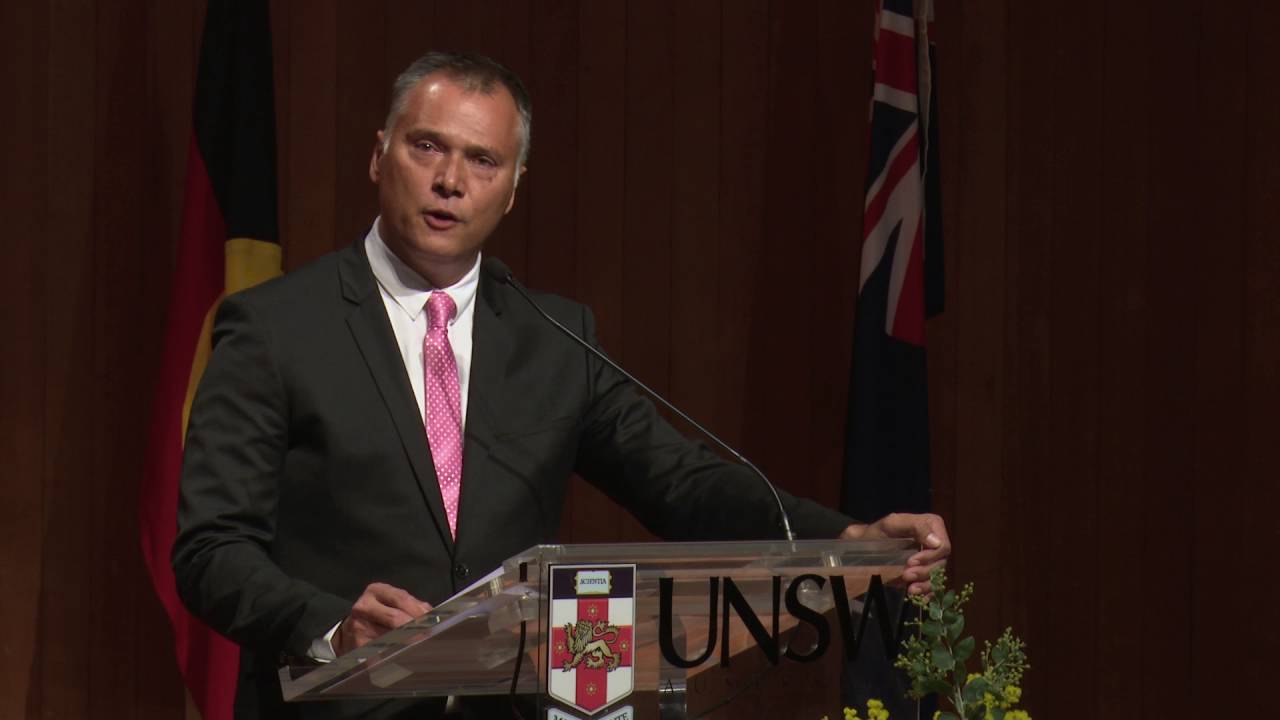 On July 29, Stan Grant was awarded an honorary doctorate by UNSW and delivered the Wallace Wurth Lecture. His delivery was more than a speech—it was a performance that took the audience on a journey – from the beginning of our Nation’s colonial history, to the contemporary institutional indifference towards the First Peoples’ rights.

Grant began from a powerful starting point—ideas. Particularly, the seminal ideas of our liberal democracy. He posed the question: How and when will the First Peoples of this Nation have a place within the Australian liberal democracy? He insisted that he would be forced to depart from the world of ideas in order to “speak from the heart”, because of the sheer rage he felt after seeing the horrific events in the Don Dale Juvenile Detention Centre.

However, Grant’s response to seeing those boys being tortured in Don Dale was in equal measure emotional and intellectual. He articulated, as only a brilliant mind like his could, that these events are a reminder that our nation’s foundational history—of violent dispossession based on the myth of Terra Nullius—continues to manifest in the legal and social institutions of this country. He delivered his lecture more like a sermon, each line more powerful than the last, reaching into his personal experiences, linking the history of our nation with the empty rhetoric and bleak reality of our modern politick.

As an Aboriginal public figure (a “proud Wiradjuri man”), Grant acts with impeccable diplomacy, setting aside personal beliefs to meet conservative politicians on their terms. Yet these people who “wrap their words in civility, while masking the beating hearts of their bigotry” seek only to endorse the minimum requirement for action with regard to our people, of which the reactionary Royal Commission is proof.

Nowhere is it more clear that we have come to an intractable position with the keepers of our “Nation” than with recognition debate. Grant addressed the ideas of “recognition” and treaty from a position of disillusionment with the dominant voices that tell us to forget our history while they rejoice in their own. His speech unequivocally rejected the symbolism of “recognition”. As a member of the Referendum Council on constitutional recognition of Aboriginal and Torres Strait Islander peoples, Grant understands that it is perverse to ask Australia to recognise us in a constitution that was designed to exclude us. “A Treaty, even unattainable, sings to the heart of Indigenous people in a way that recognition cannot”.

Yet Grant acknowledges that constitutional reform represents a chance to complete our nation. “We are still the only country in the world that would not enshrine the sovereign rights of the First Peoples”. “Symbolic” constitutional reform would shrink Aboriginal and Torres Strait Islander People’s ambitions, and betray our two-century fight for rights.  We need more than recognition. As Professor Megan Davis wrote in It’s our Country: Indigenous Arguments for Meaningful Constitutional Recognition and Reform: “While there is a commitment to addressing the statistical disparity…there is a prodigious disavowal of these historical matters as relevant to health and wellbeing. Acknowledgement of the history is the foundation of durable solutions.” Grant calls for a “Truth and Reconciliation Commission”, telling us not only that “remembering is a moral duty”, but that it is an imperative starting point for Australia to grow into a nation that would acknowledge the inherent rights of the First Peoples.

This was not a wholesale rejection of constitutional reform, but a holding-forte of the position that if we are to have it, the model must be substantial. Being a member of the Referendum Council puts Grant in the unique position of understanding the various models for constitutional reform offered by Aboriginal and Torres Strait Islander advocates. These are models that could include constitutional guarantees of: representation in parliament, the right to be heard in relation to policy development, and the ratification of agreements, treaties and negotiated settlements.

Constitutional reform, if worth pursuing at all, must be an impetus for fundamental change to our nation, and a reckoning of our history.

* Ruby Langton-Batty is of Yiman decent (QLD), and has lived in many different places across the country including Darwin and Melbourne. Currently based in Sydney, she is an intern with Corporate Citizenship at KPMG and is completing a Juris Doctor (Law) at UNSW.