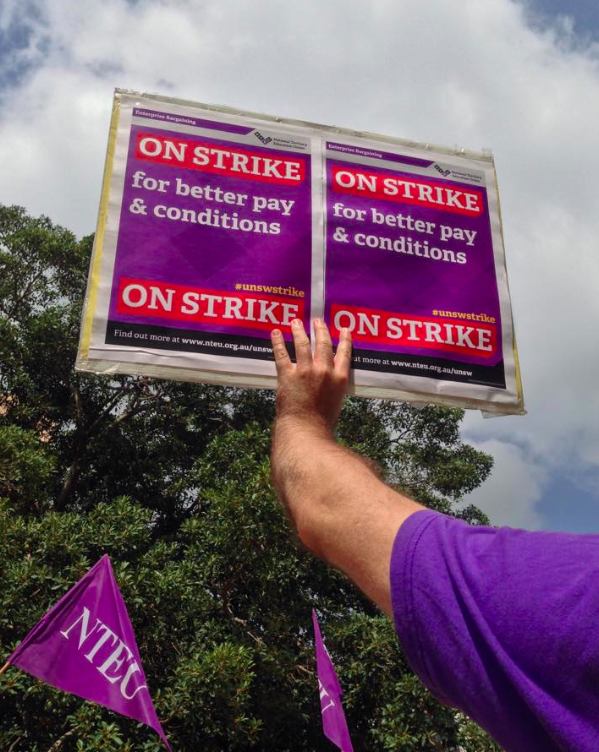 Members of UNSW staff were on strike today with support from students, picketing all 14 gates of campus over bargaining disputes.

Striking members from the National Tertiary Education Union (NTEU) were peacefully handing out flyers and talking to incoming students alongside members of the Student Representative Council (SRC) and other concerned students.

Ben Golder, a picket captain with the NTEU, said the goal of the strike was “to progress on claims in our Enterprise Agreement. It’s been eighteen months which is a very long time.”

The most recent Enterprise Agreements for professional and academic university employees were achieved in 2011 and 2010 respectively, with the university seeing extensive industrial action in 2010.

At the rally, Cara Egan emphasised the importance of solidarity between teachers and students.

“On our picket line and on our campus we are part of a bigger thing. In our small way we are making our society fairer. That is the point of a university and it always should be.”

She said the NTEU is also advocating for an improved system of addressing workplace bullying, more accessible parental leave, a fairer system for managing flexitime and greater opportunities for professional development. (See here for more detail on the bargaining items).

“Fred Hilmer may have left the building but his ghost lives on,” she said.

Previous to the strike, a University spokesperson from the UNSW Media Office, Denise Knight, issued a statement disputing the union’s claims.

“The University remains committed to finalising new agreements for academic and professional staff,” she said via email.

“We have made a number of commitments that build on our current agreements, which offer some of the most generous employment conditions in the sector.

“UNSW is not, however, prepared to agree to claims that will have a negative impact on the operations of the University. Less than 15% of staff at the University are members of the NTEU so we are confident the action will not cause significant disruption to students.”

Mr Golder said that there had been some limited progress in consultations with the university.

“We do acknowledge there’s been movement,” he said.

Mr Golder said that the union had won concessions like an extra ten days of leave for domestic violence sufferers and targets for Indigenous employees.

He stressed however, that these were “uncontroversial, low cost, aspirational agreements that look good [for the university].”

Golder claimed that the university statement was misleading.

“It’s depressing to hear that response, we [UNSW] should be leading. We can always do better and this is an opportunity to be a rich, leading uni. The university often makes this claim, often regarding parental leave.”

The NTEU’s problem with the current parental leave agreement is that is only accessible to staff members who have been working at the university for 5 years.

To compare to the University of Sydney, their current enterprise agreement allows one week of paid leave for every month worked for staff who have been working for less than a year.

Ms Gregson said that the next step was to talk to management tomorrow. “We hope that they will see reason”.

Mr Golder said that a success for the union would be a Vice Chancellor that takes them seriously.

Share
Previous Put Your Hands Up for Detroit
Next Who runs Arc? Girls.