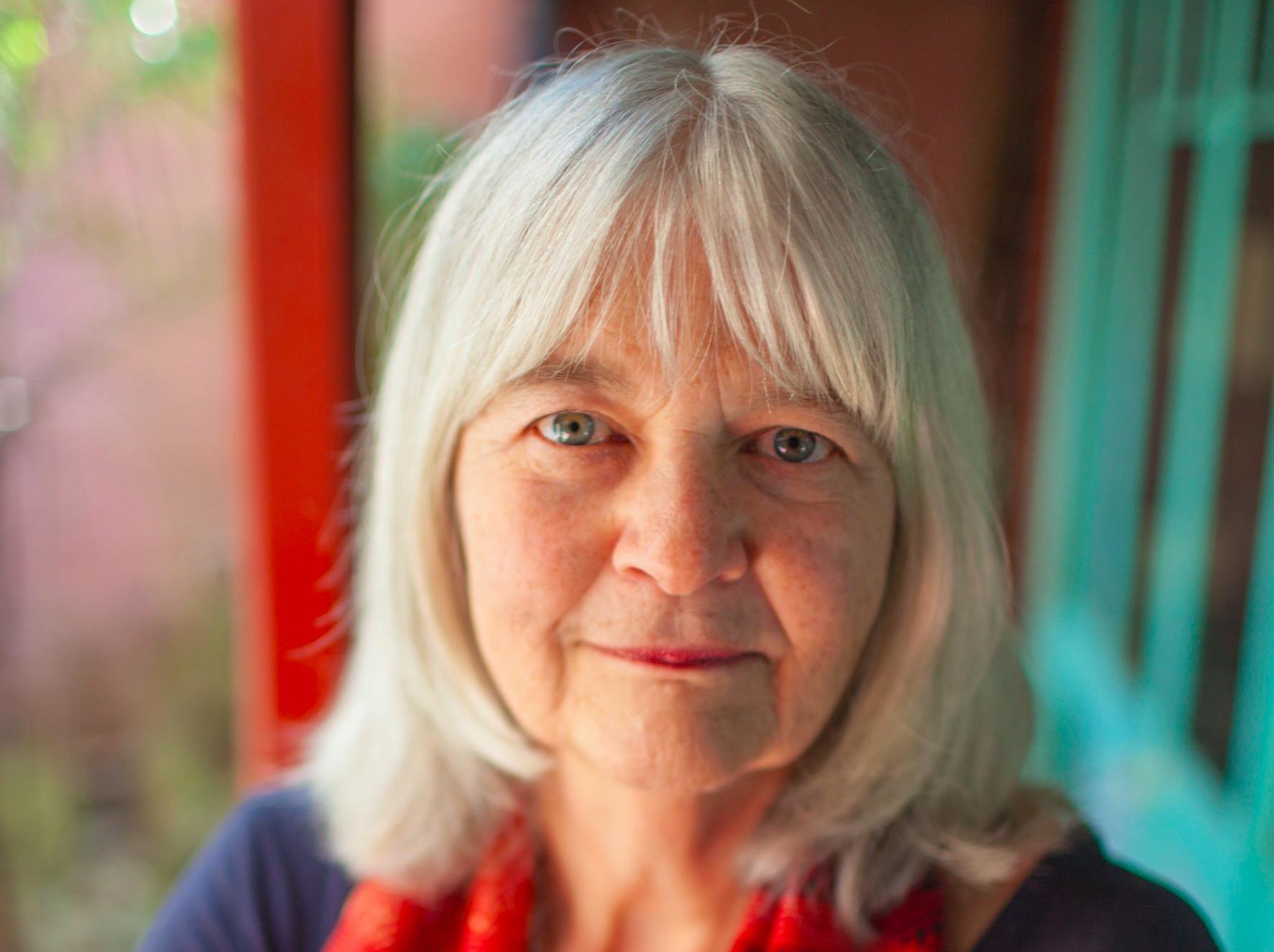 By Brittney Rigby and Alicia D’Arcy

Wendy Bacon is many things. Her website’s bio references her times as an academic, investigative journalist, political activist and former Tharunka editor (which included jail-time in the name of anti-censorship). Late last year, she was arrested at a WestConnex protest, and this April, she co-curated the exhibition, Tharunka to THOR – Journalism, Politics and Art 1970-1973. We asked her about her memories of UNSW, activism and being a woman in the 70s.

What was being a student like during the 60s and 70s?

During the 1960s and 70s, most students studied full-time, except in the holidays when we worked to save money. Accommodation was also still pretty cheap so many students moved out of home and lived in share houses. Of course, I can’t speak for the experience of all students but for many students, university life outside classes was just as important, even more important than the actual courses we were doing.

This was the time of widespread university revolt both around Australia and in Europe and North America. Students were fighting for a role in shaping university courses and the relationship between universities and the community. We understood there was a difference between representation and participation. We wanted the latter.

Of course, there was far more sexism, homophobia and even the notion of multiculturalism was only beginning to develop. The first women’s liberation meetings at UNSW were held in 1970. Male homosexuality was still illegal but the mood was one of change.

What are your fondest and worst memories of UNSW?

My fondest memories of UNSW are the “overnight stands”, when a group of friends, including students and non-students, worked on Tharunka. We resisted censorship and self-censorship and there was an exciting sense of discovery and freedom that I rarely experienced in my life as a journalist.

I can’t remember too many bad moments at UNSW. Maybe bad memories fade! I did lose my Commonwealth Scholarship for a doctorate after I went to prison briefly a second time. But looking back, I don’t regret that because that event pushed me towards my activism in the Green Ban period and towards journalism, which really was my vocation.

During your editorship of Tharunka, you published controversial material that was subject to significant debate and ended up with you being convicted for exhibiting an obscene publication. What do you think is today’s most pressing issue about freedom of speech?

It’s hard to say what is the most pressing issue but it is definitely not sexual censorship, which is not to say I would not like to see more genuine openness in the discussion of sexual matters, rather than commercial pornography, which, as we argued back in the early 1970s, objectifies women.

For me, the most pressing issue is defamation. The recent Media, Entertainment and Arts Alliance (MEAA) report on press freedom noted defamation has a chilling effect, with publishers backing down because of commercial pressure. It’s also a threat to community groups and to individuals publishing on social media. Also, there are many Federal and State laws that have come in as part of anti-terrorism legislation that have frightening powers to detain journalists and others, and therefore act in ways that intimidate people from asking legitimate questions.

Commercial secrecy and surveillance and collection of metadata are other huge problems. Self-censorship was a huge issue in the 1960s. We broke through that barrier, but there is now an enormous amount of self-censorship.

Do you think that your views have changed over time at all? How so?

Back in the late 1960s, I became a social anarchist. This was not individual anarchism, but within a tradition of social anarchism that promoted ideas of cooperation, collaboration and genuine forms of representation. I was opposed to capitalism but never a supporter of authoritarian communism or socialist states. I did not vote and was not at all involved in electoral politics.

That changed over the years and, like many radicals, I became more issues-oriented in my politics. For example, I am extremely concerned about the punitive and brutal treatment of vulnerable asylum seekers.

I also began to believe that it was important to have a progressive voice in politics, especially as the Labor party moved to the right and the Greens became an option. These days I am not a member, but I generally support the Greens. For example, I have campaigned for Greens MPs Jenny Leong and Jamie Parker in the seats of Newtown and Balmain in state politics.

I am still a strong opponent of censorship, but I believe that there have been attempts to disguise campaigns underpinned by intent to encourage racism as free speech battles. The campaign around 18c is a case in point.

In your career as an investigative journalist, uncovering corruption and ensuring justice has been a driving factor. What is your proudest accomplishment, and what does the current climate mean for both mainstream and student media?

In journalism terms, I do feel proud of my role in exposing a lot of NSW corruption in the 1980s. At that time, I was a full-time Fairfax employee. I also feel proud of the many achievements of journalists that I taught in my 20 years at UTS, some of who have become outstanding reporters and others of whom work in quieter but important ways in local and specialist media.

I’m proud of the work I did with students in producing big collaborative projects, such as one on the role of PR in journalism that we did at Crikey. Those projects were done through the Australian Centre for Independent Journalism that sadly has just been closed by UTS.

The biggest challenge to the mainstream media is finding the resources for journalists to continue to be employed to do serious journalism in the public interest. We need to look beyond the big commercial companies and we need to defend the ABC and SBS, both of which have been weakened by governments as outlets for journalism and other forms of culture.

There is a serious crisis in the production of the sort of information that people need to be active and critical citizens in a democracy. Fairfax recently announced 25% further job cuts. I am worried about the Fairfax mastheads going altogether. They still do produce worthwhile journalism that holds the powerful accountable but it is in diminished quantities. I am worried that many journalists will be lost to journalism. Strike action was the only option left.

There is a danger for young journalists that they can work in exploitative conditions and produce “click bait” and public relations content rather than journalism. I urge anyone who is interested in using journalism in the public interest to continue to always seek activity that is worthwhile. I hope that younger journalists can find some solutions.

Student media need to find ways to engage students in issues that affect them – to grab their attention in a much more crowded media sphere than existed in the 1970s.

You were involved in student activism in the 60s and 70s, and it seems that with the election of Trump and general tumultuous political times, activism is making a comeback. Any advice for students who care about the world they live in?

I am very wary of giving advice to younger people who really must make their own decisions. I have a lot to learn from them. My own Australian generation has been a lucky one. We need to contribute back as much as we can.

My only advice is that all of us, whatever our age, should organise and take action. Even if we look simply at the issue of climate change, it is critical that we do not standby and simply let a fossil fuel economy continue. I am heartened by the divestment campaign at UNSW and other universities.

There are signs that radical social activism is on the rise. We need to think of new imaginative ways to challenge power structures. Rallies or marches can work but they can also be very predictable and ritualistic.

I also believe that the personal is political. For me, that means we need to look at the ways in which our own individual situations can be connected to broader issues and structures. I also believe that when we are involved in social activism, we should try to act in the ways that are consistent with the sort of society we want to live in. If we are going to act against inequality, sexism, injustice and environmental degradation, we have to take some risks. When I have taken risks, I have been fortunate to have support. Find any small way you can to support those who are taking risks.

Make sure you check out Tharunka’s Women’s Issue, out on stands around campus now.