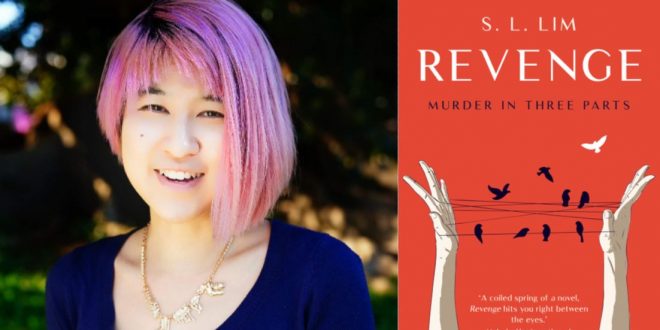 S. L. Lim is the author of Real Differences (2019). She was Editor-in-Chief of Tharunka a decade ago as an Economics/Arts student, and later worked as an economics tutor and policy advisor. Tharunka sat down with her to talk about her forthcoming novel Revenge (to be published by Transit Lounge in September 2020), what uni degrees are for, and where power lies out in the real world.

What’s Revenge about, and why should people read it?

Revenge is about someone who was born on the wrong side of the border. It’s almost this personal counterfactual, because creating art is very important to me. Like many migrants, I’m probably a generation away from quite severe poverty. I live quite a comfortable middle class life now, so there’s this sense that poverty, and limitations on one’s possibilities determined by material conditions, shape your ability to pursue a life in art.

So Revenge is about someone who has that desire, but was born in circumstances that do not allow her to enact that desire. And she ends up fucking furious, and it’s about her seeking revenge against her immediate enemies and limits at hand, which just happen to be her family. So it’s also about not liking families, because families suck.

Were there any writers that inspired you in particular?

I wouldn’t say I was trying to emulate any particular form, but one thing I like about Sarah Schulman is her capacity for directness. This idea that ‘subtlety is a literary value above all’ has its value. But reality isn’t necessarily nuanced, and her ability to convey that with great force and clarity is very mentally cleansing, in a way.

I like Haruki Murakami a lot. I think his books have a harmonics to them, a symbolic or emotional resonance and shape without necessarily having logical shape, and I think that’s quite a powerful thing and something you’d have to have quite strong native gifts to achieve.

Are you looking forward to the release of Revenge? What’s next?

I actually am looking forward to it! I was a bit iffy about Real Differences but I like this one. Real Differences is very intellectual and very moral and so on, but fuck that. With Revenge I felt more capacity to take my hands off the wheel. My third book, which I’m working on right now, is a novel about antifascism.

Do you actively think about Asian representation in media?

It depends what you mean by representation. Certainly, the fact that I am of Asian ethnicity, and that this shapes my experience and perspectives, is very much a minority thing within the Australian publishing industry.

In terms of my aspirations for my writing, I push back against the idea of representation. There’s this aspiration towards transcending the limitations of the self. And I think that is something which it’s very hard for people in the publishing industry, or white people in general, to accept from black people, Indigenous people, or people of colour.

So I would say in terms of doing my work, my aspiration is always to live as if you were already free. To write as if these particular constraints did not exist does not mean I’m ignoring my subjectivity as an Asian person, but it means not playing to an imagined audience which exoticises or has a reductionist approach to that subjectivity.

What advice would you give to students who are looking to get where you are?

Oh don’t do that, that’s terrible! Why would students want to get where I am? That’s a terrible idea, I would avoid it if possible! I would say that life honestly isn’t very good and lower your expectations, that’s my advice. (laughs)

In light of that, what drove you to write these books?

Seeing as life isn’t very good, and seeing as people have a desire to be seen in a deep way and to understand each other, one might as well expend one’s time and energies in creating beautiful things of lasting value insofar as one has the capacity to do so!

Looking back, what was the most valuable thing about going to UNSW?

Are you still involved in economics work? How do you manage it alongside your writing?

I am. I try to get the most amount of money in the least amount of time, so that I have the mental space and capacity to write and do other stuff. I’m very lucky that I have earning capacity based on the education which I’ve had the privilege to have, but if you want to do creative work, I think it’s important to keep your expenses low.

I have a great quality of life and I have everything I need. But the idea that certain people have, that you can have a glittering career and also write books – I don’t think you can have both, unless you’re very lucky or exceptional. There’s not that many hours in the day, there’s not much capacity in a mind or in a heart.

Were you ever tempted to just drop the writing and be a corporate hack?

No. A lot of people at uni don’t realise how bad being in the workplace is. It’s terrible. One should never do it. Most jobs are on a continuum between futile and actively harmful. It’s not just corporate work – the non-profit sector is full of crap and the government sector is also full of crap. It’s a terrible thing to be engaging in a daily way in work that doesn’t bring any particular enjoyment or fulfilment, and which is also actively making the world a worse place.

If there is one good thing that comes out of this whole plague situation, it will be interesting for so many people collectively across the world to observe how much of the work and effort which people undergo every day is not necessary or actively harmful for our collective survival.

How do you avoid complicity with those harmful systems in the workplace?

I think real power, or power to act in solidarity with your own values, comes with building your own relationships and accountability towards people who share those values. You can withhold your complicity from people, organisations or workplaces that engage in negative actions to do with climate, worker’s rights, borders or whatever. When people see this, resistance begets resistance.

I think people think that power is vested in corporate or official institutional positions, and once they have that position they can wield that power. That’s not actually true. Malcolm Turnbull was always thought to be the greenie, sensible guy on the Liberals, and he was the Prime Minister of Australia! He sought to act to a certain extent on climate, and he was taken down for that. If you derive your power from an institution, then you take on the particular constraints of that institution.

Share
Previous Spilling the Tea on Instagram’s Detox Tea Obsession
Next Literary Tag #1: The Rise of the Ibis