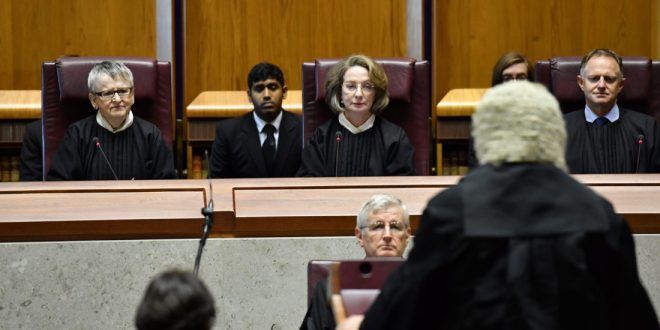 Attorney-General George Brandis makes a speech as Chief Justice Susan Kiefel (C) looks on after being sworn in as Chief Justice of the High Court in Canberra, Monday, Jan. 30, 2017. (AAP Image/Mick Tsikas) NO ARCHIVING

By Henry Chen and Rose Huang

Amelia Loughland is a recent UNSW Arts/Law graduate. Her new journal article, ‘Female Judges, Interrupted’, has set the legal fraternity abuzz. She speaks to Tharunka about her journey as a law student, and challenges faced by women in the law.

Amelia, you’ve published an article in the Melbourne University Law Review. It’s been picked up by the Sydney Morning Herald and it’s gone incredibly far. What’s the article about?

The article is the result of an empirical study I did on transcripts of proceedings in the High Court of Australia, trying to assess whether there was an interruption pattern, and if so, whether it was gendered. I found that women were interrupted at nearly twice the rate of their male colleagues.

The rest of the article was about why that’s the case, and whether we can eliminate other factors. But ultimately I find that gender is the primary salient factor in explaining why one judge is more likely to be interrupted than another.

What did you notice that drove you to write this article?

It started out as a project for the High Court of Australia course, with Professor Rosalind Dixon. She drew my attention to a study done in the United States by Professor Tonja Jacobi which was finding a gendered pattern of interruption, but between judges. Senior male judges would interrupt more junior female judges at something like triple the rate of anyone else. So we thought, well, let’s see if there’s a similar pattern in Australia.

But if you read my paper, you’ll see that judges never interrupt each other. There’s one, and I think it’s Justice Bell saying ‘Sorry, what was that page number?’ to Justice Gordon. That’s literally the only one in two and a half years, which is pretty incredible. It shows there’s a norm of behaviour which is pretty different to the Supreme Court. But that was the inspiration for it.

I must say I started the project in the summer, before the course started, because I was worried I wasn’t going to find anything. So there isn’t a kind of embedded bias that some people on Twitter have suggested that I have. I was fully prepared to find nothing.

Did you expect your article to receive so much attention?

No, not at all! I was just mentioning to you, I’ve just arrived back from overseas. I posted it on Twitter when I was at Auckland Airport at 5:30 in the morning. Then I turned my phone off as I was unpacking and when I went back on, it had just exploded. I had a hundred notifications, everyone was – you know, a whole range of responses. Mostly positive, but some saying some unkind things about Women’s Studies and feminist rags and things like that – which is to be expected when you post something on Twitter.

But all the good and the bad, it feels amazing to be contributing to public discourse. I think a lot of the time you read papers which just remain in the journals, in an ivory tower. To be part of a national media discussion, especially for the first paper that I’ve ever had published, is really gratifying. I’ve really enjoyed it.

Where would you like to see this paper go?

I don’t want to name and shame any of the barristers. I want people to be aware of their own behaviours. And I’ve already had people message me, saying they’re conscious of their own behaviour. Someone pulled out a transcript from the High Court today, of a barrister apologising to a female judge. I’m probably over-attributing my own work to say that that’s the cause, but the fact it’s occurring is a great thing. I’ve been invited to speak at a Victorian Women’s Bar Association event. I think raising awareness and tackling unconscious bias is where it’s going, so I’m really happy with it!

Looking back, what advice would you give to a student in first year interested in making this kind of social impact?

My only advice would be, when you take on these projects, don’t just see them as a university assignment. That’s how I saw it myself at the beginning. But then I started getting the results and seeing how interesting it was. Professor Rosalind Dixon is the whole reason this happened. She was like, this isn’t a university assignment, this is a study which you have to talk about.

So if you’re doing interesting work, don’t see yourself as in the university bubble. See yourself as part of a broader legal discourse and a broader conversation, and just involve yourself in it! Don’t just leave it to the night before. If you find something interesting, pursue it, do it well, and who knows where it’ll take you!

In your article, you suggest that the Chief Justice should do more to ensure speakers in the High Court take turns, to reduce how often male barristers interrupt female judges. But you write that it’d be more effective for male Chief Justice to do that. Why?

I think that’s an unfortunate reality – it’s not my position. Women judges are expected to overperform impartiality. Often they write judgments in a particular way, shorn of any sign of emotion or opinion, because they’re worried about being accused of being ‘like a woman’. Any divergence from the male norm is seen as being partial, and that therefore takes you outside the expected judicial role.

In the United States, Justice Sotomayor of the Supreme Court called herself a ‘wise Latina’ judge, and the press just went crazy. They were like, ‘how can she be expected to judge impartially, she’s identified that she’s not like a judge, she’s a wise Latina lady’ – which is absurd. Everyone brings their own background and opinions.

As a result, men are seen as the more impartial arbiters of the courtroom. If it’s just an expectation of the courtroom that they’re regulating interruptions, rather than ‘looking out for their own’, that might (unfortunately) be the best way to address this, at least in the short term.

I’d also like to clarify that the paper wasn’t necessarily about male barristers interrupting female judges. It was about advocates interrupting in general, but unfortunately there were pretty much no women appearing in the courts. There was one case with two female lead counsel in two and a half years! I wasn’t expecting to find that kind of low rate.

So we need more women appearing in these decisions. Not only are women being talked over, but they’re not there. They’re not part of the conversation. They might interrupt women just as much, I don’t know. I don’t have the data to be able to show it. But we need equitable briefing programmes, we need to change those norms about women appearing in the first place.

You write that ‘Law schools might have a role in educating students on how unconscious biases are reproduced in the courtroom and in legal culture more broadly.’ What do you think the UNSW Law Faculty should do?

At the same time, I think there’s a great opportunity to be talking about research like I’ve done. In our law classrooms, there is a very discursive, Socratic teaching method. Men actually do dominate the speaking time in classrooms. These are the people that are going to be the barristers and the judges of the future. I think there’s no reason not to start talking about unconscious biases at an earlier stage. Not as a feminist study course, but just as part of practising law.

Share
Previous Legalising Drugs: Should We Follow the Australian Capital Territory?
Next How the Red Rooster Line is Moving