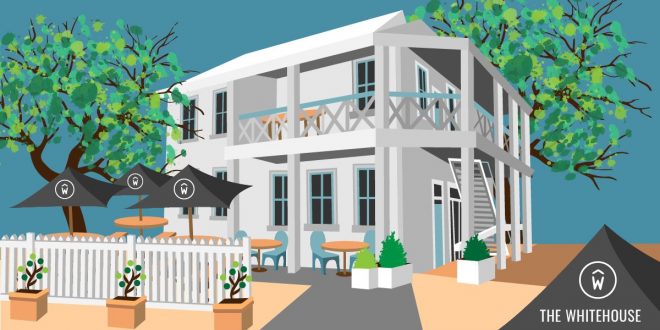 So long, partner: UNSW’s farewell to the Whitehouse

UNSW students reflect on their experiences at the iconic Whitehouse as it prepares to close its doors next week.

“The Roundhouse feels like that 18 -year-old cousin who thinks that cigarettes are cool, Tame Impala is indie, and often retells stories of him drinking illegally. Whitehouse feels like that mid-20s cool cousin, who has their shit together and is cool without knowing they are cool.” – UNSW student, Su-Ann.

It’s the end of an era folks.

After 10 amazing years, The Whitehouse is officially closing its doors on April 23rd, marking the end of a memorable decade filled with lots of memories, great food and of course, $9 cocktails.

Since re-opening in 2011, The Whitehouse has become a go-to hangout spot for students wanting a home-base for coffee-catchups, lunches and even, first dates.

“I have so many memories of the Whitehouse, from meeting and studying with friends to FrenchSOC lessons, to getting depressed and having a punchbowl to myself,” said UNSW student Su-Ann.

“[It] was the drinking hole of choice when I was in my first year, my study and meet up place in my second year, and still a great place for everything, from good food to good drinks”.

“[The Whitehouse] was where my mates and I would unwind after a long day of classes and studying. It was the perfect spot to have a few drinks and just chill out – I’m definitely sad to see it go”, another student, Nicole, said.

When the news of the closure broke on the UNSW Discussion page, a lot of other students had more to say.

“Omg this is the end of an era”, one user wrote.

“I’m devastated. Where are we going to get Wednesday shnitty’s from?”, another commented.

While a majority of students reminisced on the memories they had at The Whitehouse and bonded over their shared sadness of it shutting down, others were slightly confused.

To this student, unfortunately it is not Washington’s Whitehouse that we are bidding farewell to. Although I’m sure we’d all love to see how that scenario pans out, turns out that the symbol of America’s democracy is (shockingly) still going strong.

But alas, it is UNSW’s own Whitehouse that we are saying goodbye to. Now, in all fairness, while it’s hard to compare democracy with great coffee and chicken shnitties, UNSW’s loss of The Whitehouse will definitely be a hard hit.

As another UNSW student, Sasha, said,

“[The Whitehouse] really did feel like a safe space to me whenever I was on campus. There was good food, good company, good vibes – what more could you ask for?”.

The Whitehouse will surely be missed. However, the reality of its closure only comes with the promise that something even more exciting will come along, and although it may not be cheap cocktails and Burger Monday’s, we are sure that it will be as meaningful to UNSW as The Whitehouse was.

The Whitehouse over the years:

1893: The Whitehouse that we all know and love today was actually called the Jockey’s House! It was a preparation and room for jockeys.

1945: It was a military operations base during the second world war.

1948: During this time, the space was used as a hostel for migrants.

1955: The Whitehouse was a military training unit during this period. It even got a new look – dark chocolate!

1987: Another name change for the Whitehouse in this year. When the National Institute of Dramatic Arts (NIDA) took over the building in 1962, the name was changed to Fig Tree Theatre.

2005: The building was taken over by the Communications Law Centre, which was an independent organisation that dealt with legal issues in the media. It was during this period that The Whitehouse got back its signature white look!

2011: Alas, The Whitehouse as we all know and love today officially re-opened in 2011, following an extensive year of renovations.

Share
Previous Med Revue 2021: somewhere between Shrek and Marriage Story (with a sprinkle of stereotypes)
Next Stories of sexual assault and harassment at UNSW: in the victims’ own words