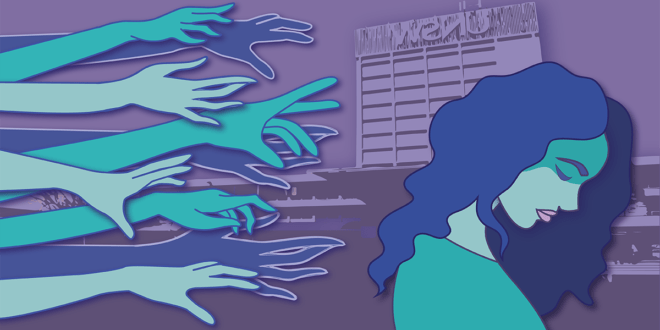 by Sanjana Jose and Maha Rauf

A recent allegation at UNSW reveals the prevalence of sexual assault on campus and the culture that enables it, the institutional dismissal that often follows, and the system that repeatedly fails to provide justice.

Disclaimer: After consulting with a gendered violence expert, Tharunka has chosen not to name the perpetrator or disclose the details of the following sexual assault case as the matter is currently in court and doing so may have a bearing on the outcome of the case. We also wish to maintain the victim’s anonymity and autonomy.

The Daily Telegraph reported that the matter went to court in May. The alleged perpetrator’s defence lawyer made an application for bail, which was initially refused. The magistrate deemed the case a serious matter that involved an alleged victim who lacked the capacity to consent. The alleged perpetrator has denied the allegations of sexual assault.

The alleged perpetrator is apparently still enrolled at UNSW; his defence lawyer claimed he would be able to continue studying online without entering campus grounds.

In July, the alleged perpetrator was granted strict conditional bail, after spending several months behind bars. The presiding judge granted bail under the stipulation that the alleged perpetrator stays 3 kilometres away from UNSW’s Kensington campus, reports to the police daily, surrenders his passport, adheres to a 9pm curfew, restricts any contact with witnesses or the alleged victim, and resides at his bail address.

According to various sources, the alleged perpetrator is an award-winning, Dean’s list student, a scholarship recipient and a former UNSW course administrator.

This case is emblematic of so many elements of sexual assault on college campuses: the presence of alcohol, the preying on unconscious victims, the lack of remorse or even acknowledgement of the violation, and the radio silence of the wider university community surrounding the circumstances.

Sexual assault, unlike other crimes, implicates survivors as much as it does perpetrators. Survivors are robbed of power, agency, autonomy and safety. Their right to consent is nullified in any one of a thousand ways, but when they seek justice for what has happened to them, they risk being dragged through the same penalizing process as the perpetrator themselves: forced to relive their trauma before strangers, face numerous cycles of strenuous hearings, have their actions scrutinised, and their credibility undermined ruthlessly by those on the other side.

Survivors of sexual assault grapple with their trauma differently; some may want to report the crime, may be open to sharing details of the event, willing to expose and name their perpetrators and prepared to accept the consequences of doing so; whatever they may be. Others may want to keep quiet, and attempt to move forward with their lives.

It is ultimately the right of survivors to choose what to do in the aftermath of the assault.

It is, in fact, one of the very few choices they have in the matter at all.

This is what makes talking about sexual harassment so difficult. The crime itself is shrouded in secrecy, often occurring in spaces where silence around the issue is the prevailing norm. Often silence seems the best option for survivors– it is certainly less burdensome than coming forward. Silence ensures the privacy survivors deserve to have. Yet, unfortunately, silence is also precisely what encourages and emboldens perpetrators.

So, how do we expose and hold perpetrators accountable without compromising the autonomy of survivors who do not wish to have their lives paraded under the public eye?

Following the alleged incident, Tharunka reached out to the UNSW and the residential communities’ for their response to the alleged perpetrator’s arrest. A UNSW spokesperson responded: “Complaints or allegations of sexual misconduct against students are addressed in accordance with the UNSW Student Misconduct Procedure. As this matter is currently before the courts, it is not appropriate for UNSW Sydney to comment at this time. However, we want to reinforce that the safety and wellbeing of our students and staff is paramount at all times, and sexual misconduct is unacceptable.” They have also stated they are unable to comment on individual cases or any that are before the courts.

In 2017, the Australian Human Rights Commission (AHRC) found that 51% of all university students were at some point sexually harassed during their studies.

The AHRC also found in their 2016 Respect. Now. Always survey that the proportion of surveyed students who had experienced sexual harassment at UNSW was 3% higher than the national average. Almost a third of the respondents reported being sexually harassed at university. Of the students surveyed, only 7 per cent resided in university-owned or affiliated accommodation, but they made up 34 per cent of students who had been assaulted.

In 2020, UNSW medical student Zhanyi Png, was charged with aggravated sexual intercourse without consent, aggravated sexual touching without consent and common assault, following an incident in a ward of St Vincent’s Hospital on 1st May 2019. He practiced a genital examination on a female patient which left her with an abrasion, and he did so without a support person present. He conceded that it was “poor judgement” but argued that poor judgement did not make him guilty of the alleged crimes. He was eventually acquitted.

In 2016, a video emerged showing students from the Philip Baxter College, including the president of the college, chanting derogatory, misogynistic lyrics: “I wish that all the ladies were holes in the road, and if I was a dump truck, I’d fill them with my load”.

UNSW’s residential colleges have long been entangled in several accusations of gendered violence. In April of this year, Tharunka released an article regarding sexual misconduct on campus, where 15 anonymous accounts of sexual assault and harassment at UNSW were made public. Six of those accounts allegedly occurred within UNSW colleges, with one submission stating that there have been 7 allegations of sexual assault in an undisclosed college just within the span of a few months.

UNSW is not the only university veiled with controversies in residential colleges. Misogyny and sexual harassment persist in colleges nation-wide. In 2017, the University of Sydney commissioned ‘The Broderick Report’, which describes various instances of extreme sexual violence, hazing and other problematic practices occurring at residential colleges, with the notable inclusion of the ‘Bone Room’.

This report was denounced by the student body, with the University of Sydney’s SRC and End Rape on Campus Australia (EROC) representatives at the time calling it “whitewashed” and “lukewarm”. EROC, a volunteer run organisation that advocates for policy change and seeks to end sexual violence on campus and residential colleges, critiqued the report’s methodology. They commented that the use of focus groups, rather than individual interviews, dissuaded sexual assault survivors from coming forward.

A few months later, EROC released a report titled the ‘Red Zone Report’, prepared by Walkey award winning journalist Nina Funnell and EROC ambassador Anna Hush, which explores sexual violence and hazing in Australian university residential colleges. The explosive document details incidents of male residents masturbating in shampoo containers so that female students would wash their hair with semen; a competition that encourages excessive drinking known as the ‘Bachelor of Inebriation’; and an annual event known as ‘The Purge’ where students would share graphic, sexual pictures. It repeatedly discusses predatory attitudes amongst senior male students toward younger female students, citing an infamous pro rape, anti-consent Facebook group called ‘Define Statutory’. Perhaps the most disturbing declaration in this report is that the university was aware of these practices. University colleges have long allowed their residents to engage in extraordinary acts of interpersonal violence and afforded them a level of immunity by repeatedly letting these traditions go unchecked.

In 2018, following a sexual assault occurring near campus, UNSW sent an email to students and staff, telling them to “walk with purpose and confidence”, “stay to main pathways that are well-lit and populated”, “maintain awareness of your situation” and “do not walk alone with your headphones on or with your head down looking at your phone.” This email, grounded in startlingly blatant rape myths and victim-blaming narratives, illustrates a deep misunderstanding of the nature of sexual assault. It reinforces the fallacy that rape is preventable by, and the responsibility of potential victims. It also encapsulates the reality of institutional dismissal. Walking confidently and being ‘aware’ of the situation does nothing to protect anyone and has nothing to do with why rape really occurs.

Since 2018, UNSW has instituted a Sexual Misconduct Prevention and Response Policy, which outlines that “UNSW will continue to develop and implement a range of prevention strategies” and “will effectively and appropriately respond to sexual misconduct”. The Sexual Misconduct Implementation Working Group (SMIWG) leads efforts to prevent and respond to sexual misconduct, with strategy development, enforcement and systematic reviews. They have also stated that First Responders are “specially trained members of the UNSW community” (although internal findings suggest otherwise) who can also serve as a point of contact for anyone seeking guidance about support services and appropriate contacts at the university. Finally, there is The Sexual Misconduct Reporting Portal, where data is collected regarding incidents on campus. This information is kept confidential, and the typical response time to any allegations made is within the first 72 hours.

Once a report of sexual misconduct is made, the university may commence an investigation and if substantiated, ‘will impose an appropriate disciplinary outcome’. If reports constitute criminal conduct, they will be referred to the police. Alleged perpetrators will, in this process, be given the chance to respond to the allegations before a decision is reached. The Sexual Misconduct Prevention and Response Policy was up for review in June.

The UNSW spokesperson also stated: “Earlier this year, in response to ongoing awareness campaigns such as Be A Better Human with Arc, UNSW saw an increase in students and staff accessing the reporting portal, either to report a current or historic incident, or to request help.”

Whilst all these measures are absolutely crucial and a step toward creating a safer environment, it is important to remember that the vast majority of incidents are not reported, (according to one finding, 96% of sexual misconduct incidents have gone unreported at UNSW) or if they are reported, they lack the ‘evidence’ to prove the claims to the required threshold, because sexual assault is a uniquely private crime that often involves one person’s word against another’s.

Further, UNSW is vague about its ‘appropriate disciplinary outcomes.’ In ‘Local Perspectives: A case study on responses to sexual violence in a university setting’, the Australian Human Rights Centre commented that without clear procedures and concrete sanctions on perpetrators of sexual assault and harassment, the university’s commitment to ‘zero tolerance’ is “meaningless”.

The recent shift in the broader social understanding of sexual assault on campus has been so dramatic and so overdue that it has obscured the fact that our systems still mostly fail on this particular topic. They do not address the culture of sexism, silence and secrecy within which these incidents occur, nor do they adequately hold perpetrators accountable.

The truth about sexual assault as a pervasive fixture on university campuses is harrowing. However, it is important to note that it is the function of a greater social issue – universities are representative of the norms of a culture that is rooted in patriarchal and misogynistic codes. That does not, however, recuse universities of any responsibility. Rather the onus is on institutions to make the necessary transformative changes focused on protecting survivors and ensuring accountability for offenders by implementing evidence-based policies.