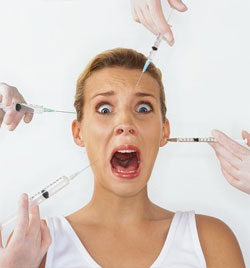 22 year-old part-time student and retail manager, Anna* — like an increasing number of young women — booked a cosmetic surgery holiday to Thailand, but her budget breast implant operation was more than she bargained for.

“When I got to the hospital, I was pretty shocked with what I saw. There were people literally lining up against the walls, just people crawling everywhere in that hospital. I remember my sister was there with me, and she said that she felt like she was in a cattle yard.”

After a 10-minute consultation with her doctor, she began to have doubts about going under the knife: “he couldn’t speak English fluently … He was trying to tell me what he was going to do, and I was trying to communicate with him in English, but it wasn’t working out, you know?”

“After waiting longer than I was meant to, like about an hour and a half, I started to freak out a bit,” she says, but she felt as if she had reached the point of no return: “there was nothing that I could do about it, I had already paid for the whole procedure and package.”

Any hopes for a confidence-boosting transformation were instantly crushed as she looked down at her new, deformed chest. “It was just bad. The breast implants were just not the same size, one was smaller than the other … I was so upset,” she says.

She was assured by her doctor her breasts would return to normal, but the sharp pains from the infected breast tissue were becoming unbearable. The company was now in hiding and it was time to fly home.

Already “broken after the surgery in Thailand”, her only option of recovery was to go under the knife again in Australia. Fortunately, the operation was fully funded by Medicare: “I needed Medicare more than anything. I would have been in pain for much longer than I could bear … and be a million times more in debt than I am now,” she says.

Dr Paul Belt, a cosmetic surgeon specialising in breast augmentation, often deals with the aftermath of sub-standard offshore surgeries like these, but does not think Medicare should help fund their repair. He recalls seeing patients with “life-threatening infections [from] having surgery in Thailand at two in the morning (because the surgeons basically just wanted to get it done as fast as they can and were obviously half-asleep)”, but feels it is unfair that “the Australian Government and the public — you and I alike — have to basically foot the bill.”

Dr Belt has witnessed illegal implants that were inserted in Thailand despite being recalled globally in April 2010, and has even retrieved packaging left inside a breast cavity, so it is no surprise he believes that Australia has a higher standard of care than overseas hospitals. Problems arise, he says, when people “jump on a plane … and see someone whose credentials they have no options to check, and they just proceed with surgery — almost just going in blind. Sometimes they get a good result and a nice outcome, but the vast majority that we see is where that isn’t the case.”

He argues that people have elected for these risky surgeries, often against medical advice, so it is wrong for them to take the place of “worthy patients who have been waiting and waiting”, and reparatory surgeries are “costing Medicare millions, if not more, in health care dollars”.

However, Dr Meredith Jones, an expert in cosmetic surgery studies, holds no judgement against medical tourists: “If you decide that the best thing for you is to go to Thailand, then by all means do that.” She also doesn’t think off-shore surgery is any more risky than local operations: “there are the same risks as undergoing the procedures here, exactly the same … things like scarring, infection, death, just being unhappy with the result.”

Dr Jones believes there is a prejudice against women opting for cosmetic surgery: “what they’re basically saying is that ‘if a woman goes overseas and gets breast implants and they go wrong … she shouldn’t be entitled to Medicare’. That is exactly the same as saying ‘if a young man goes to Thailand, rides a motorcycle without a helmet … falls off and hurts himself … that he should not be allowed to access Medicare’,” she says.

Although Anna’s breast implants were costly to fix, she thinks she deserved subsidised treatment as much as anyone else in need of an emergency operation.“Why shouldn’t I have access to Medicare? I am just as entitled to Medicare as any other person — I mean, I pay my taxes like every other person — and to say that I shouldn’t be entitled simply because I had surgery overseas … is just wrong.”

Despite the risks of overseas operations, each year, around 15,000 Australians are travelling to countries like Thailand, Malaysia and South America, mainly for breast implant operations (which are also the most common surgery requiring corrective treatment in Australia).

Dr Jones explains the reasons for the trend: “lots of them are to do with cost, so you can have procedures done more cheaply overseas — most of it is to do with this industry simply growing. It’s also to do with cosmetic surgery gradually becoming a lot more acceptable.”

However, the Australiasian Plastic Surgery Foundation says that cosmetic surgery tourism can be dangerous in that it combines postoperative care with a holiday: “sitting by the pool, drinking cocktails and snorkelling does not qualify as postoperative care.”

Amy Dimos, a 24-year-old from Brisbane, had a fault-free breast implant operation while on a holiday in Columbia and saw a business opportunity in the growth of medical tourism and this virtually untouched surgery destination for Australians. The “hospitality, care and comfort that (she) received in Colombia” inspired her to open ‘Latin Beauty Escapes’, which offers plastic surgery at a fraction of the cost ($3,500 compared to $7,000–12,000 in Australia), and has been met with huge public interest.

Amy is about to embark on her first tour: “the two girls that I’m taking this weekend, I’ve met with them each at least 10 times, either for coffee for them to fill out some paperwork, or for them to talk to me about it. A lot of trust goes into it,” she says. Having travelled to over 40 different countries and studying Spanish, she is more than confident her trip will be a success: “I wouldn’t be taking girls over there if I felt like I’d be endangering anyone. I felt that I had taken lots of risks for my trip and my procedure, and I’ve eliminated those risks for my tours,” she says.

Despite her confidence, she encourages her clients to extensively research their options, and warns: “you need to be a really confident traveller before you even consider getting medical procedures performed overseas on your own.”

Dr Belt believes the success of companies like these is due to clever marketing and the use of ‘travel agents’ rather than medical consultants. Business owners like Amy are often immune from being sued and “complications don’t get reported because the patients are overseas, and there is no one to complain to.”
“It’s really clever marketing and it’s breaking every moral and ethical advertising standard that all the doctors in this country have to adhere to,” he says.

The Australian Society of Plastic Surgeons warns against organisations run by non-medical professionals: “if they’re simply a travel agent or broker, you should view this as high risk.” Also, the unaccountability of these organisations means the Government has to pick up the slack. However Dr Graeme Southwick, a plastic surgeon from Melbourne, says the problem lies with the patient: “all they think is ‘holiday … cheap compared with Australian prices’, and they return to Australia after their botched operation and think ‘well, I’ve had it done overseas, but Medicare should pay for it’.”

Dr Belt knows all too well the desperate position patients find themselves in upon return to Australia: “I know patients who have gone and chased the various cosmetic tourism companies, and these companies don’t exist. You ring them up a few weeks later and their telephone numbers have changed, they’ve changed their name and they’ve gone underground.”

Despite having a successful facelift 28 years ago in Perth, Sharon’s* recent operation in Malaysia left her with a crooked smile and a lop-sided, lumpy face. Her complaints to the company she booked with — Gorgeous Getaways — were ignored for months, until they eventually sent a “nasty e-mail with legal jargon about a review of my surgery in one year, and a Board would decide if I needed corrective surgery at my cost. I finally wrote to the CEO and told them to never contact me again!”

Sharon tried to warn others about Gorgeous Getaways’ packages, but the company deleted her wall-posts and all other negative feedback posted by others on their page. “They should be called Hell Getaways,” she says.

Anna also had trouble contacting the company liable for her dodgy breast implant surgery in Thailand. After emailing the company for four months, she received a response three weeks ago informing her “they’re not going to offer a refund … or even partially compensate me. It’s just disgusting, to be honest. I was thinking about legal action, but it would just cost too much as well,” she says.

Anna admits she was lured in by the low cost of the package and never took into account that “maybe something super bad would ever happen,” she says. “You just don’t realise the cost that something like this will have on you physically, and the impact it has on you mentally … I’m young, and I don’t really have that much life experience yet, I guess, but this whole experience has just been a massive regret. Because of this, I’ve had to grow up massively,” she says.

“Just thinking about undergoing something like that again makes me squirm, and I guess a little angry. But you know, it is what it is.”

*names have been changed.

I got paid to write essays for students. Here’s what I learned.