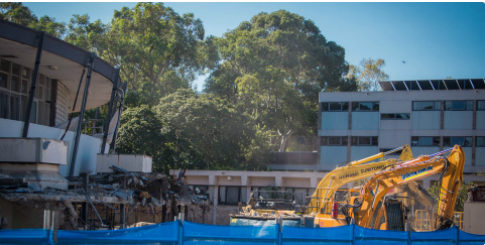 Nestled at the lower end of  campus, The Roundhouse has been a UNSW staple for generations of students.

However, business seems to have inexplicably declined at the beginning of 2017, likely in response to dramatic changes made to the once-bustling bar.

The first thing I noticed when I arrived was the shocking decor. Nearly all seats from the once packed bar had been removed, the paint had been stripped from the wall to reveal the ugly, grey concrete underneath, and ceiling lights hung precariously from their electrical wires. I understand the trendy rustic aesthetic, but this level of minimalism has taken it too far. The Roundhouse urgently needs renovation if it’s to continue profitably.

Likewise, the customer service has declined significantly since I last paid a visit. I waited at the bar for twenty minutes for a staff member, calling out before, finally, someone came to serve me (reluctantly, I might add). He was wearing construction gear (weird, right?), and offered me a drink straight from his flask.

Another major problem with the bar is that the ambience is far too smoky. Thick, heavy smog permeates the space, and makes it difficult to breathe. I found myself coughing constantly, desperate for fresh air. My doctor recently told me that my test for tuberculosis had come back “inconclusive”, so it’s unclear whether I began coughing blood as a result of visiting the Roundhouse, or a rare, dormant lung condition for which I had no prior symptoms.

The Roundhouse has some serious problems to fix before it becomes the centre of university life again. I hope it can ditch aspects of its failed attempt at a rustic style, and come back as a modern, hip bar for young students.

The Eighth Floor of the Library

Situated between the seventh and ninth floor of the library, the Eighth Floor of the Library offers abundant study spaces, and a beautiful view of the Kensington skyline.

A number of my favourite books on this floor includes Upholstery in 18th Century Germany (1988), and Curtains of Modern America (1923). Actually, the Eighth Floor contains no such books. But that’s the point: an important feature for any anonymous study space is that you have no idea what mysteries it contains.

If you’ve beenlooking for a place to study, I wouldn’t hesitate to recommend the Eighth Floor of the Library; it’s a good as anywhere else.

That Strange Blue Fountain Behind the Library

Although I can’t tell you exactly where it is, That Strange Blue Fountain Behind the Library is a brilliant visual metaphor for the isolation and desperation of university education, and of early adult life in general.

From experience, That Strange Blue Fountain (or TSBF as it’s more commonly known) is the perfect place to begin an existential crisis. In my second year of university, after having a particularly bad study session in the library, I went for a walk outside to try and clear my head. I made it only so far as the dilapidated fountain before I had to stop and contemplate my life.

Was study something I really wanted to do? Was I cut out for my degree? Is UNSW the place for me? A scab of dry, blue paint floated on the scummy water. I felt a lot like that scab of paint. In fact, I felt an awful lot like the fountain itself: wedged between two staircases, nameless and forgotten, the only acknowledgement a brief nod of disdain as people wandered by. I wanted to disappear, like  water down a hair-clogged drain – but I knew that, like the water, I would be spluttered back out into the stream, only to ripple and sink again.

Although TSBF has only offered me opportunities to use it as a metaphor during my own, often educational or existential, crises, I am certain it would be just as suitable for use in expressing unrequited love, family difficulties, or advanced dehydration. The flexibility of TSBF as a visual metaphor is what has made it an enduring icon on campus.