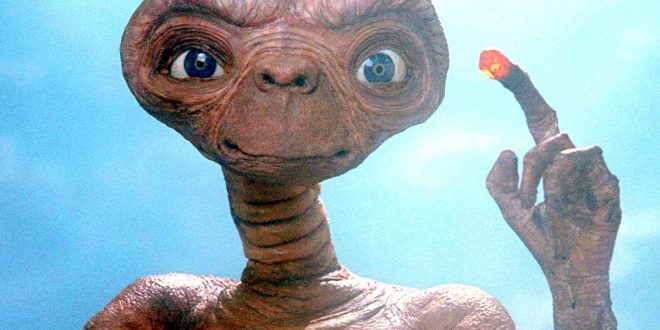 Hello, my dear readers (yes, all eight of you)!

I have received countless emails asking me, “Riley! Where is my fortnightly dose of Science FACT-ion!?” To you I say fear not, for I have been deep undercover, uncovering the truths that no one else dares speak! It’s definitely not because the second trimester hit me harder than a tonne of bricks. So, join me would you as we discuss aliens and their place in both our cinematic and real universe.

Extra-terrestrials have plagued our collective imaginations ever since people began pointing telescopes at the stars. In the last 40 years alone, aliens have probed us (Mars Attacks), invaded us (Independence Day), been invaded by us (Avatar), befriended us (E.T. the Extra-Terrestrial), hunted us (Alien), and have even been Seth Rogan (Paul). But why are we so obsessed with aliens and, more importantly, are we alone?

Our story begins in 1947, when two seemingly separate events would change how we thought about aliens forever. The first of these events was the first ever ‘flying saucer’ sighting by aviator Kenneth Arnold. The second and more famous of these events was the Roswell UFO Incident. After a 200-yard long wreckage was discovered near an Army airfield, the local paper claimed that it was the remains of a flying saucer (in reality it was part of top-secret Cold War Project Mogul). In the following years the Army did little to quench this belief when crash test dummies, believed by some to be alien bodies, began falling from the sky in the area. This began UFO fever across the US, especially in the Midwest where tales of abductions and crop circles became standard. As a result, films starring aliens saw a huge surge in popularity and, in turn, so did public interest for the search of alien life.

So, are we alone? Excluding the rather unsubstantiated claims of alien abductees, the most compelling piece of evidence of intelligent life is the WOW! signal. In 1977 a radio telescope in Ohio picked up a signal which appeared to originate from the Sagittarius constellation. To date, there hasn’t been an adequate answer to the signals origin and is often considered to be an alien radio transmission. Since then however, the stars have been quiet. In lieu of any physical/observation evidence, many scientists have been primarily focusing on the statistical probability of intelligent life in the universe. Using equations such as the infamous Drake Equation, scientists have estimated that the number of alien civilisations in our galaxy could be anywhere between 0 to 100 million, the most recent estimate being 36. These estimates however are just that, estimates, and have yet to overcome one large over looming obstacle, the Fermi Paradox.

Developed by physicist Enrico Fermi, the Fermi Paradox is the apparent contradiction between the high ‘probability’ of other intelligent civilisations and our complete lack of evidence of their existence. For instance, human beings are relatively new to the universal scene, humanity only existing for 200,000 of the universe’s estimated 4 billion years of age. In comparison to the universe, we have been around for less than a tick of a clock. So, if we assume that we are not alone, there must have been civilisations billions of years ahead of us. So, where are they? This is the heart of the paradox.

There have been many hypothetical explanations for this ranging from intelligent alien life destroying themselves, to the hypothesis that Earth is deliberately not being contacted. Perhaps the most sobering explanation comes from professor Brian Cox; “We are the first civilisation to emerge in the Milky Way, and we are alone. That is my opinion, and given our cavalier disregard for our own safety, it terrifies me.”