Siren Vandoll is an Australian sexuality educator & consultant who works to empower people through education, creation, and advocacy. She uses her unique skillset and collaborates with individuals, groups, organisations, and companies to promote sex positivity, share knowledge, and promote inclusivity. She sits down with Tharunka’s Sahana Nandakumar to shed some light on the increasingly visible polyamory community.

“Life’s very simple. If you are curious about something, then give it a go!”

The above statement was made by one of Australia’s prominent sexuality educators and consultants, Ms Siren Vandoll. She has worked, and advocated for awareness and change, in the worlds of sexuality, relationships, identity, feminism, and social justice for over four years. As both a theorist and a practitioner, Siren gives Tharunka a unique insight into her experience with polyamorous relationships.

Siren defines polyamory as a “form of ethical non-monogamy that’s related to the cultivation of multiple relationships, usually romantic and sexual, with the consent and knowledge of all parties involved”.

It is easy to be confronted by the possibilities raised by polyamory. Siren points out that many of us are conditioned to think that monogamy is the right way to conduct one’s romantic and sexual life, resulting in the automatic assumption that everything else is wrong. She recalls that when she was 12 years old she thought she was a terrible person because she couldn’t imagine herself with one other person forever. In her mind, effort has to be taken to unlearn the toxic messages children are conditioned with to better understand one’s own, and others’, sexuality.

When asked about polyamorous relationships being labelled as “cheating”, Siren explains that the informed consent from all partners creates a clear divide between cheaters and polyamorists. Polyamorous relationships are built on the explicit definition of the terms of the relationship for all involved. This is achieved by abandoning traditional assumptions about relationship dynamics, allowing a greater level of transparency and honesty that isn’t always the norm in monogamous relationships. Siren explains, “You’d rarely think about having a 25-minute open conversation about your boundaries and preferences with a tinder date, but most polyamorists never forget to.”

Polyamory lends itself to a kind of collective communication, which is not as common in open relationships. “We have our own ‘polycule’ (Poly molecule/poly family) and we are aware of our responsibilities to each other,” Siren says. In this way, polyamory is characterised by its likeness to an eco-system, while open relationships are more centred on the primary couple.

Each polycule functions with its own unique dynamic. The “kitchen table” ecosystem describes a polycule where all partners enjoy meeting and getting along with each other. Alternatively, the “parallel” ecosystem is characterised by partners that are aware of each other but do not necessarily interact with their partners’ partners. However, at the end of the day, each individual in the polycule is well aware of their emotional responsibilities.

Siren further explains how polyamorous relationships themselves aren’t immune to cheating. “One thing I love about poly is that because it’s not the norm, you have the freedom to pick and choose the rules and boundaries that work for your relationship, but when you lie or you break the rules, then you are cheating in the relationship” she says. Common examples of infidelity in poly relationships are agreeing to have safe sex with other partners and failing to do so, or not disclosing emotional changes. Ultimately, she explains, poly boundaries may be different from monogamous boundaries, but they can still be breached.

Siren attests that she has learned a lot from her years of non-monogamy. She claims that the freedom to continue to meet people made her stronger as a person, more explicit in her communication, and empowered her to be a self-advocate. “When you’ve got to be radically honest and upfront and emotionally responsible so often, those skills make you a better friend, a better colleague, and prepare you for any kind of relationship.” On the other hand, Siren acknowledges the risks in poly relationships, expressing how some struggle with time management, or date too widely and don’t understand one’s own, or one’s partners’, limits. As she considers polyamorous relationships to be just as valid as their monogamous counterparts, it is unsurprising that they can be just as damaging if not taken care of.

“Could jealousy be present in polyamorous relationships, and how do you go about managing it?” As soon as I said the word jealousy, Siren predicts the entire question, as it was one of the most common questions she is asked.

“Jealousy is a human emotion and all of us obviously do feel it at times, but these relationships are all about communicating your emotions and finding a collective solution” she replies.  Siren highlights how jealousy is caused either by one participant’s needs not being met, or by a partner engaging in actions that increase a participant’s feelings of insecurity. There are more complicated situations, Siren says, including when one partner feels inferior to another, and explains that eradicating inferiority complexes takes time and effort from all parties.

The discussion of jealousy leads us to a conversation on “compersion”, a feeling of joy one has when witnessing the joy of another. Siren expresses gratitude for such an amazing feeling, but clarifies that it is a common misconception that all people who are polyamorous feel compersion. She emphasises that one isn’t a bad polyamorist if they don’t feel compersion. “Compersion isn’t just for the poly world; it’s something for all relationships. The moment we stop thinking that someone’s happiness is at the cost of ours, we’ll automatically feel compersion”.

Some come out as polyamorists at a very young age, but the transition from monogamy to polyamory is more common. When asked about how tough transitioning is, Siren says that the change is unique to every individual. There are no guides or instructions on how to transition in the best way. The only advice she has is to “take it slow”. It could take years to complete the transition, but, to Siren, the healthiest way is to take stable, baby steps. In particular, coming out to one’s existing partner can be really tough, and it’s important to navigate the transition with much care.

To Siren, making up one’s mind, and being upfront with one’s ideas, both help make a smooth switch from monogamy. She finally adds, “my solution for most problems is to just talk about it and be open about it, and you’ll see that tough times feel much easier immediately”.

Sex positivity for Siren isn’t about being the kinkiest, most polyamorous, or most open individual. Rather, it means rejecting the common narrative of shame, dirtiness, and unnatural disgust surrounding atypical sexual activity. She believes polyamory and sex positivity go hand-in-hand, but acknowledges that there are still polyamorists who carry internalised sex-negative thoughts. She explains that sex-positive communities play a major role in monogamous and non-monogamous individuals feeling more confident and valid about their sexual needs. It is common for polyamorists to be “slut shamed”, but these communities give them the strength to keep pursuing their happiness.

However, sex isn’t everything that Siren and other polyamorists care about. Polyamorous ace and aromantic individuals, for example, engage in multiple emotional relationships with no sexual expectations. “We have this one word for love in English and it just describes one type of romantic relationship, whereas in reality there are so many kinds of love, and so many ways to express it” she says. To Siren, some like sex and some don’t, and it doesn’t make any relationship better or worse.

For the new buds of the poly family, Siren’s advice is to be in touch with one’s emotions, research appropriately, and continue learning about the polycule. Additionally, she recommends finding poly communities and socials, getting support, never stopping experimentation, and always being mindful of one’s wellbeing.

Siren has something for the non-poly molecules too! Ongoing education, irrespective of whether one wants to engage with polyamory or not, can help to break down incorrect knowledge and prejudice, and may help to improve the lives of others.

At the end of the conversation, Siren had one last nugget for all of us to take home,

“We are all human; we all screw up. So if you are curious about something, then give it a go!” 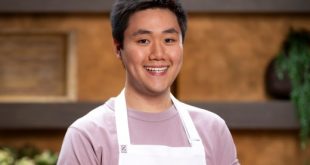 From UNSW Med student to Masterchef 2021 contestant: in conversation with Eric Mao

Illustration Between BY MAGGIE HILL I. Some days I am her. Smooth skin and a …