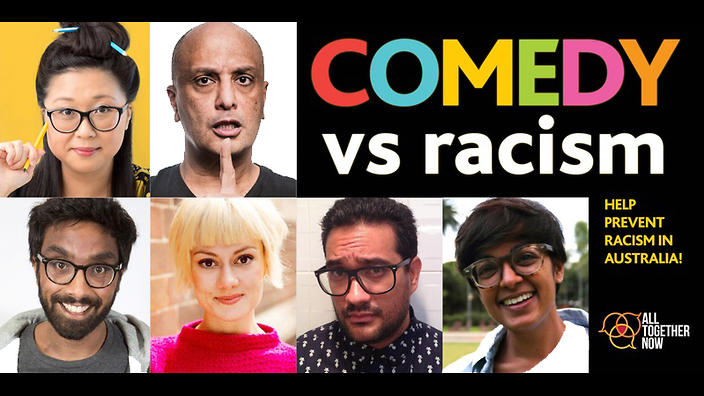 By Nicola Ray and John Seroukas

In an event where comedy meets commentary, the hugely popular comedic spectacular “Comedy v Racism” brings together an eclectic group of Australian comedians, each punching out their punch lines in the fight against everyday racism.

Organised by “All Together Now”, a national agency dedicated to promoting cultural diversity and eradicating racism, the show aims to expose the role comedy can play in combatting racism and discrimination.

Some of the most stellar performers on the night are Eggmolesse, Saleh, and Carnovale.

Eggmolesse, whose accolades include being awarded runner-up at the 2016 Deadly Funny National Showcase, delivers first. He seamlessly strides across the stage, joking and whispering about the different ways he and his White wife discipline their child.

Eggmolesse effectively roots their differences in each other’s own culture and upbringing, reminding us that our cultural and behavioural differences are not something that should foster intolerance, but instead can make quite humorous content.

One of Australia’s most well-known comedians Akmal Saleh, renowned for his national tours and frequent television appearances, is just as hilarious on stage as he is on television.

Saleh concedes that it is often easy to get distracted by the everyday racism he faces. To demonstrate, he jokes anecdotally about a time where he bought manure from the hardware store. Convinced, yet fearful, that he would be suspected by the shop’s assistants of plotting to make a bomb, he responded to the innocent query, “Just doing some gardening, mate?” with “Nah … I’m making a bomb.”

Saleh also gets the audience roaring when he admitted to having been walked out on when mistaken for popular comedian, Carl Barron.

Jen Carnovale’s style is like a belly-bursting, yet casual, conversation that you simply can’t ignore. The daughter of Italian and Hungarian migrants speaks wittily yet critically about the racism she faced as a teenager, and, astonishingly, continues to face by children in her own workplace. Jen jokes about the racial slurs thrown at her by preschool children, highlighting the importance of nipping racism in the bud by educating our children on tolerance and equality.

Following the individual performances, the panel sits together to discuss the role they believe humour plays in eradicating racism and discrimination.

“Humour”, they conclude, is a malleable concept. Someone may tell you to take something you find offensive “as a joke”, because they find it humorous.

Ultimately, the intention behind one’s humour doesn’t change the impact it can have upon others. However, the team concedes that it is just as much a part of the arsenal of the everyday racist as it is the weapon of choice for those who challenge racism’s shallowness and illogicality.

You can donate to, or find out more about the work of “All Together Now” here.