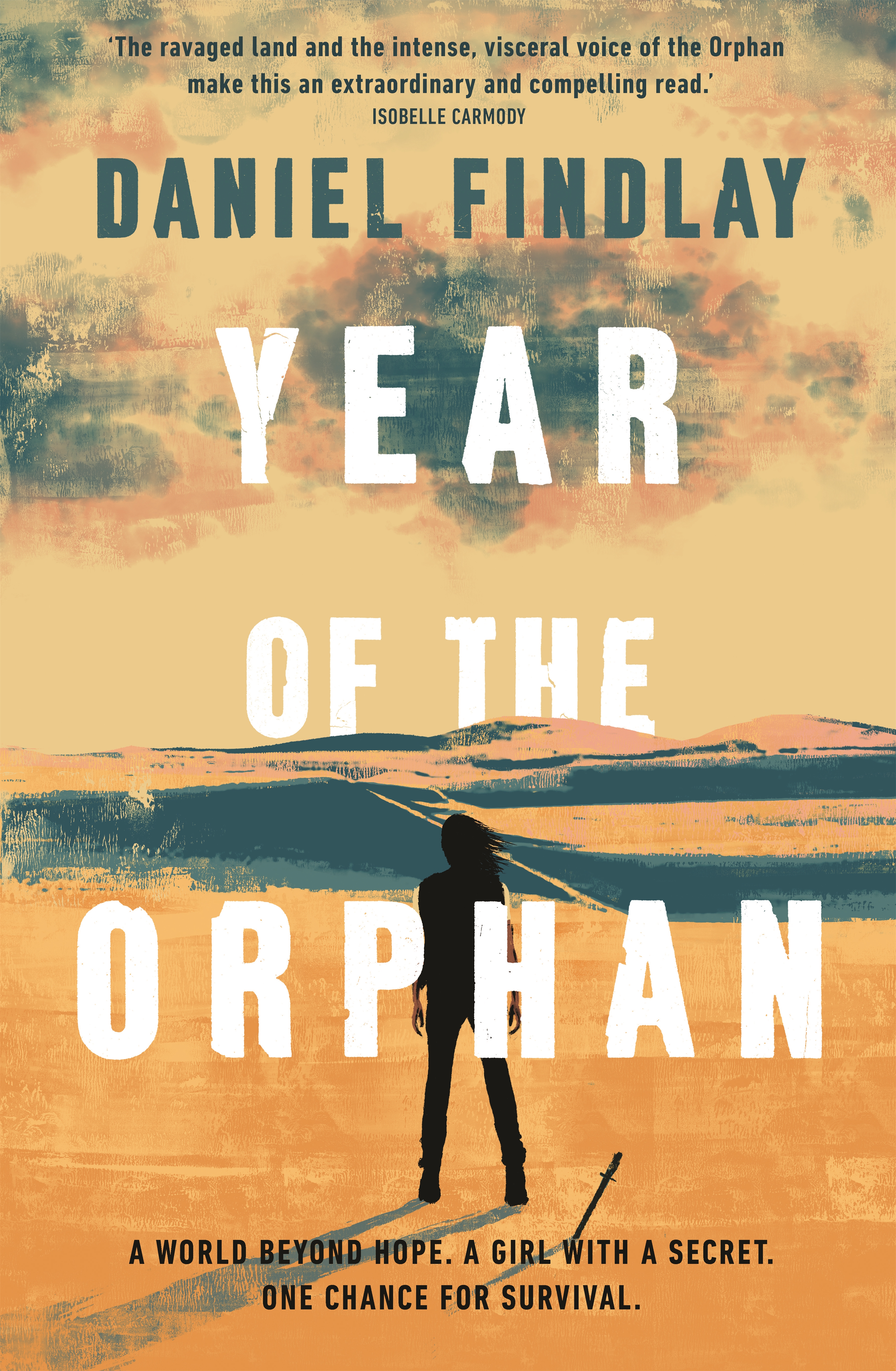 A Review of Year of the Orphan

You probably picked up your last K-Zone from Woolies a while ago. But the man who brought you the best kid’s magazine around has now written a dystopian novel.

Year of the Orphan is a gripping story set in a post-apocalyptic Australian Outback. Make no mistake, there are no true-blue rangers wearing akubras or romantic meetings of lovers in a pastoralist station. Daniel Findlay’s unique perspective of the genre makes for an insightful, engaging and thought-provoking journey through Australia, should it cease to exist as we know it.

The dull landscape and hard, almost cruel characters, contrast greatly with the face of the innocent girl. Her only kin, Mam and Jon, were taken by the bloodthirsty Ghosts that hunt in the wastelands. A small and fragile young thing, her introduction to the System begins with her being bought as a slave. Behind the gilded walls that are built high with scraps of metal and items leftover from the time Before, she learns quickly to survive as a scav or perish in the red sands.

Written during National Novel Writing Month (NaNoWriMo), the entire book is written in its own linguistic derivative of Australian slang and colloquialisms. The language is reminiscent of Trainspotting or A Clockwork Orange in that respect, as it reflects the world that the characters exist in. I wouldn’t say it’s a difficult read purely because of the language, but the writing style may be harder to overcome for those looking for an easy read. I had problems reading it aloud: my inner drunk bogan revealed itself.

But at its best, the writing style is fucking spot-on. Its familiarity is enticing, yet discomforting, and central characters reiterate the language to drive home prominent themes. What makes this novel so memorable is writing’s consistency and ambition; the book’s world feels tangible.

After cruising through a few chapters, I had the opportunity to talk to Daniel himself. A historian by training, his background influenced this novel in a prominent way. The inspiration for the landscape and the premise for this tragic future is based on real Australian history, in particular, the story of Maralinga. Maralinga was the site for nuclear testing from the 1950s, and its long-lasting impacts have been a forgotten chapter in Australian history. The destruction of the natural environment, and the implications for the Maralinga Tjaruta people (the First Nations people that reside there) finds its traces in the post-apocalyptic world that Findlay envisions.

There are a lot of traces of Australian slang and colloquialisms – it’s familiar and unfamiliar at the same time. How did you decide on the way the book was going to be written?

It wasn’t something that I initially planned on doing, but once I started to create the character and think about the world she was living in it seemed that she needed to speak in her own voice and that the world needed its own vernacular. It just felt like a natural fit. I don’t think you could set something post-apocalyptic – the buildings have fallen down the society’s crumbled – and that might also happen to language or it might evolve or develop in its own way.

How do you see your work fitting into the post-apocalyptic tradition or was it something that you hadn’t consciously decided?

The ones that I enjoy most are the ones around the 50s and 60s around nuclear paranoia – for some reason, that’s particularly fascinating to me.

I did my homework on the tropes, and what the characters were like, and how people approached the post-apocalypse, and then I wanted to write something very, very Australian as well. The closest thing you can draw a line to is Mad Max; it’s like this huge famous work in Australian post-apocalyptic art or literature. So I gathered a lot of different things and the historical influence of Maralinga. So that gave birth to the idea of where it would be placed, how it would be placed, and then everything evolved from there.

So how has your history training impacted your work?

I can’t pretend I was a great historian. I did a BA with Honours at USyd, and one of my majors was history. I did Australian history and had a real love for it.

As an Australian author, I really wanted to write books set in Australia, I wanted to write about something definitively Australian. And I sort of used this real history as a jumping off point for an alternative history, which is what Year of the Orphan is. It’s rooted in the reality of the things that happened in Maralinga as well.

What drove you to write this novel and what did you hope to achieve with it?

I wrote this during National Novel Writing Month. Every day you sit down and hammer out a word count. At that point it’s not very good, all you’re trying to hit is a target every day, it’s about getting the raw creative process out and having that consistency of sitting down every day and doing it. This was the story that came out.

What I hope to achieve with it? I guess, part of the reason I placed it or engaged real history with it was because a lot of people I spoke to – your age or my age – haven’t heard about Maralinga. It’s something that I wanted to start a conversation about.

You’re a leading editor for youth magazines – can you talk a bit about that? For me, K-Zone was peak Australian childhood.

I’ve been the editor of K-Zone for the past six or seven years. I get a lot of people who have obviously started reading K-Zone, and now they’re … in the workforce. So sometimes when we’re interviewing people for a position, they kinda come in, and it’s really cool, because they’ve been fans like their whole lives – so you’re chatting to someone and they literally have issue number one and they might bring it into the interview and show you and be like, I am a super fan, which is so cool.

Year of the Orphan is released on 29 May.

Share
Previous The Power Of Parentheses
Next Logging: How a Trip to East Gippsland Made Me Give a Damn