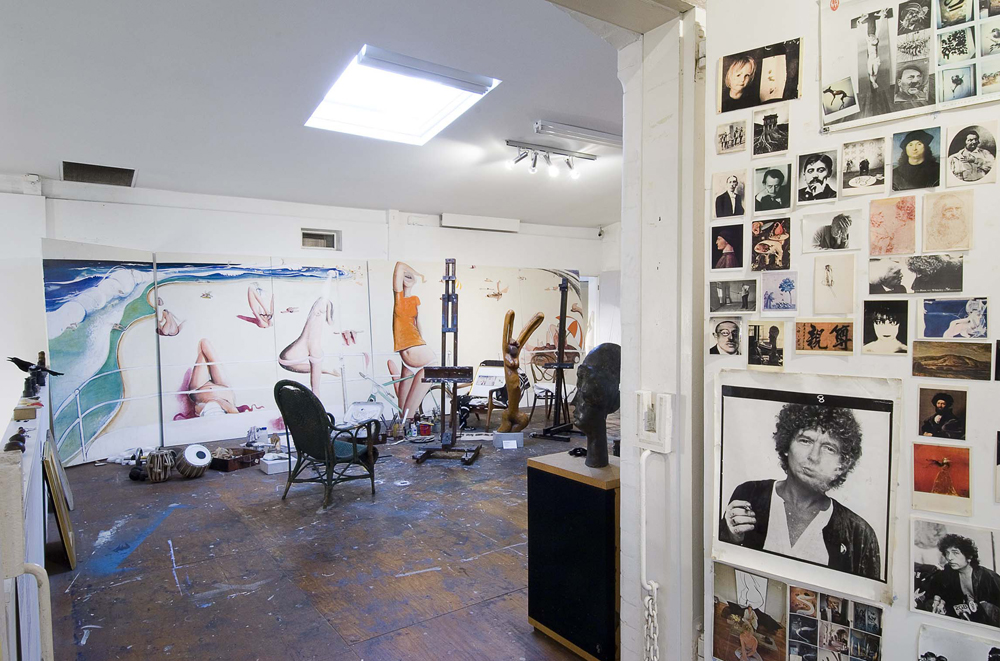 Tucked away in the back streets of Surry Hills is a studio where one of Australia’s most iconic artists, Brett Whiteley, used to live and create in.

Post-divorce and in the throes of heroin and alcohol addiction, it was a space Whiteley retreated to four years before his fatal overdose in 1992. It’s a fascinating homage to the artist, and if you haven’t yet ventured into it, it’s about time you did. Whiteley’s paintings and drawings line the walls of the two storeyed studio-turned-gallery, which is open every weekend to the public. The converted warehouse has an intimate, homely vibe to it, as if you’re stepping into someone’s open-planned pad. It’s an inevitable feeling because the space was after all the artist’s home for some years. You’re free to roam both floors, meandering from the ground level gallery up a staircase to Brett’s living quarters.

There you’ll enter a casual living-room set up. Oversized cushions surround a low coffee table scattered with bound copies of the artist’s journals and sketchbooks. Out of Whiteley’s handwriting surface his creative ideas, inner thoughts and infinite words like ‘rapture’, ‘complete happiness’, ‘love’, ‘time’, ‘everything’.

Grainy acoustic sounds seep out of a nearby stereo. Through two huge open doors, each boasting the artist’s eclectic photo collection, is the loft where Whiteley used to paint and sleep. By his bed is a long bookshelf heavy with inspiration, including exotic shells, birds’ nests and abundant art history books. A half-finished painting of Bondi bathers stretches across the back wall. There are quotes scrawled everywhere, namely about art, drugs, life – and noticeably, the creative process, which one suspects was for Whiteley the culmination of those themes.

Obsessive, ambitious, and volatile, Whiteley led a whirlwind life of intensive creativity, fame, and self-destruction. Throughout his career, Whiteley won copious awards, most notably in 1987 when he was awarded first prize for the Archibald, Wynne and Sulman prize – simultaneously. Such an achievement was unprecedented and since unbeaten. Yet for as gifted as he was, Whiteley surged with white-hot energy that incited both creativity and destruction.

The painting, ‘Alchemy’, screams of this. Darkly sexual surrealist forms and vivid Australian landscapes melt into one another and ooze out of the epic panorama. It’s inspired by the Renaissance fantasy of the transmutation of the base metal lead into gold. For alchemists, the metallic metaphor alluded to a profound transformation of the soul. For Whiteley, the daring work was his attempt to capture his life, passions, influences and search for spiritual truth in art. Whiteley had written, ‘Everyone reaches a point in their life where they must either change or cease.’ The tragic irony is that Whiteley’s life metamorphosis occurred in the reverse of alchemy, slipping from gilded talent and fame to gritty degeneration.

Whiteley once famously said, ‘I paint in order to see’. And one gets the sense that the more Whiteley saw, the more he felt. He identified with his perceptions on a deeply personal level, expressing them visually as extensions of himself. Every undulating curve, subtle shudder, visceral twist of people and objects have been carefully observed and transposed by Whiteley through line. You can get a real feel for the essence of the subject – whether it’s a drooping palm frond or the s bend of one’s spine – through the line work alone. This is why Whiteley’s pictures, which at times verge on abstraction, lose none of their realism. More than a sign of technical skill, this ability to draw out the essence of subjects is the result of the artist’s innate sensitivity and emotional engagement with what he sees. Like their creator, Whiteley’s works are loaded with nostalgia, curiosity, pleasure and turmoil, which is why they’re so stirringly poignant.

This is evident in painted scenes of Sydney’s Lavender Bay, saturated in a deep ultramarine blue. Intricate foliage drips down from the tops of elongated Moreton Bay Fig trees. Sinuous lines swoop across the canvas mimicking the surging ocean current. They parallel the long viscous torsos of the artist’s carved nude sculptures. Fluid sensuality is also seen in ‘The Divided Unity’, adapted from Hokusai’s ‘The Great Wave off Kanagawa’ from the 1820s. Whiteley’s version is much looser though. A turbulent ocean and gusty sky ripple through paper soaked with undulating inky lines.

But for as sensual as Whiteley’s pictures are, they’re also tinged with darkness. Take ‘Woman in Bath’ for example, currently on display at the Art Gallery of NSW: Wendy, Whiteley’s former wife and eternal muse, is depicted nude with her back turned to us. Her arms are wrapped around her swelled chest in a protective self-embrace. Creamy white water splashes down onto her elongated, buttery thighs and one can’t but help think that the scene is post-coital. Vague shapes and crumpled lines fill the bathtub with impressions of wet, glistening flesh and secrecy. The subject is at the same time alone and intruded upon. She is swallowed up by two thirds of the dark blue canvas and, by contrast, is starkly illuminated by a cool electric light. She shudders beneath the viewer’s gaze, or perhaps the bath water has simply turned cold. Like many of Whiteley’s works, the scene is an arousing fusion of sex and violence.

Echoes of this work are evident in the chilling ‘Christie Series’, but here sensuality has been swapped for jarring violation. The body of work was based on the murders committed by a man who gassed and raped his female victims. Pallid limbs are jumbled together and, like in the bathtub nude, are dominated by an ominous dark blue picture plane. Slick mosaic tiles punctuate the image, clashing with breast, buttock and an asphyxiated faceless head. A single line bleeds out from the figure to the far edge of the canvas where it connects with the killer’s hand like a fatal leash.

But even Whiteley’s painterly documentations of death and his own inner torment ultimately pulsate with life. For Whiteley, ‘Art is the thrilling spark that beats death.’ Although a mantra which did not save the artist from his own demise, his art, which is still pertinent today, certainly did beat death. The Surry Hills Studio is a reminder of Whiteley’s enduring artistic vitality. It is a space heavy with nostalgia and reminders of a time and talent past. But it is at the same time bursting with creativity, full of the artist’s passion for life and all it has to offer.

‘The London Years’ explores Whiteley’s art and life from 1960 to 1967, including works from his Bathroom, Christie and London Zoo series, and monoprints of conversations with Francis Bacon. The Surry Hills Studio is located at 2 Raper Street, Surry Hills and is open on weekends.

Previous Sternly Worded: Being Old and Being Young
Next Items From My Desk