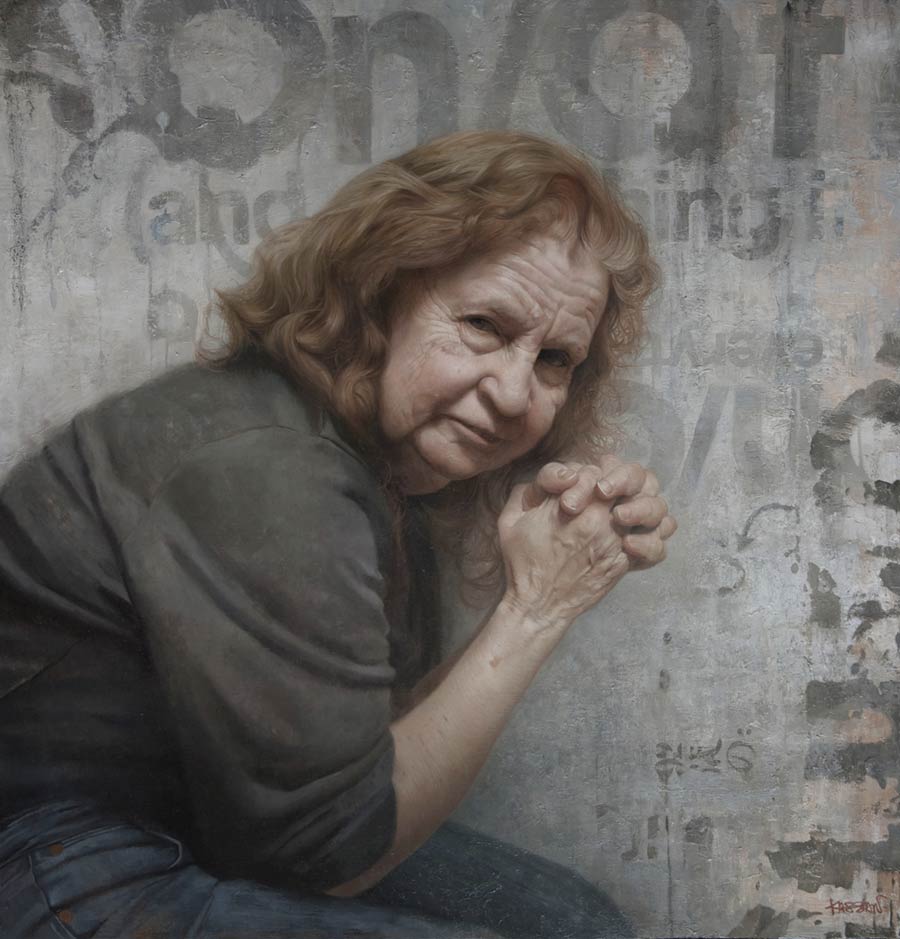 There’s something deeply powerful and captivating about Brooklyn-based painter David Jon Kassan’s paintings. They’re the kind of works that stop you in your tracks, suspending you before them.

This is in part due to the technical skill that they clearly showcase – it’s almost inconceivable that a person can reproduce, out of paint, so realistic an image as Kassan does. But mostly we are drawn into the works and held there because they so poignantly strike a chord with the viewer, resonating on a raw, emotional level.

More than simply replicating his subjects Kassan seeks to understand them, acting as an empathetic intermediary between what he sees and what he creates. He carefully observes and reproduces every nuanced indication of his subject’s appearance, feeling and personality.

In so doing, he incites a connection between the subject and viewer, opening up an interface with which he is conscious not to interfere. You won’t find loose, messy brushstrokes that you see in a lot of contemporary works because Kassan’s concern doesn’t lie in the visual appearance of paint in-itself. Instead he aims to control the medium of oil paint so that the subject is preserved in their pure essence. Charles Hawthorne, founder of the Cape Cod School of Art, said it best when he stated: ‘The only way a painter can appeal to humanity is to show people more – more than they already see, and he must show them with so much human sympathy and understanding that they will recognise it as it they themselves had seen the beauty and the glory.’

Looking at Kassan’s work, one is captivated by powerfully expressive hands, pensive faces, and flesh that appears warm to touch. Our gaze transcends the picture plane and permeates deep into the subject’s psyche.

Consider Kassan’s portrait of his mother: Her curved back leans over as she sits calmly in side profile. Propped up on faded jeans, her elbows lead upwards to veiny hands and interlaced fingers. These hands alone provide insight into this woman’s persona and the life she’s lived so far.

Behind her is a concrete wall, indented and stained with signs of wear and tear that come with age. Its rough fresco-like surface is contrasted with the woman’s soft, palpable face, around which cascades wispy hair tinted ginger and white. She appears a strong woman, with her tilted head decisively turned to face the viewer. Her eyes stare backwards and outwards, fixated on a point to the left of the viewer and beyond to a virtual horizon. It’s as if she is reflecting back on her past while at the same time pondering an inevitably unfolding future.

Youth, aging, life and death circulate in Kassan’s works. His paintings feature sitters spanning across ages, ranging from young, radiant nudes to stoic, dignified elders. In each case, Kassan’s paintings seem to rise and fall with the steady, heavy breath of his sitters, serving as kinds of visual representations of weighty streams-of-consciousness comprised of past experiences, memory and introspection.

In his self-portrait, Kassan himself appears deep in thought, with eyes downcast and head lit from above by cool, white daylight. There’s a sobriety and shamelessness to those depicted, no matter what their age, and in turn we feel towards them an admix of sympathy and compassion, pity and respect. Most importantly, we can identify with them.

Kassan’s representational realist style is in this way two-fold: His technical mastery of the medium of oil paint combined with highly adept draftsmanship enables him to fluently represent what he sees. But unlike the cold mechanical mimicry of photography, Kassan’s realism is grounded in the realness of emotion and feeling emanating from his portraits.

In comparison to a photo’s uniformly glossy surface, there’s a rich tangibility to Kassan’s work due to a process of intensive and careful layering, as seen in the stunning flesh tones he achieves.

Kassan builds up layers of translucent oil paint to form a lattice of veins, blood and skin through which light enters and is reflected, rendering his subjects with a veridical luminosity. The smoothness of flesh is contrasted with areas that have been sanded back and reworked, causing textural accents to play across the surface of the painting.

This is just one example of the inherent contradictions in Kassan’s work, which oscillates between representation and transformation, reality and abstraction. We see this in his backgrounds, which are graphic and fragmentary, reminiscent of the work of Franz Kline and Robert Rauschenberg, and yet are at the same time highly refined ‘trompe-l’oeil’ texture studies.

The splicing of formalistic abstraction with realism is the result of the marriage of Kassan’s experiences as both graphic designer and painter. Kassan is constantly intrigued by the abstract visual elements his urban surrounds.

Broken lettering, billboards patterned with remnants of faded, multi-coloured flyers, grids of hard architectural lines, shapes and numbers, all inspire the strong design elements underpinning Kassan’s work. The artist’s inclusion of flayed urban exteriors in his paintings invites the viewer to appreciate that which is typically overlooked and deemed mundane.

But these surfaces are also symbolic. Weathered, graffiti-marked walls, dissected by peeling paint and torn down posters, serve as descriptive patinas. Like the figures before them, these surfaces import a sense of history, wherein the past, present and future culminate. Time is an unbroken continuum of experience, change, growth and decay, and both subject and background are visceral embodiments of this process.

Kassan explains that his artistic practice consists in taking the time to aesthetically appreciate life on a micro-level: ‘My work is a way of meditation; of slowing down time through the careful observation of overlooked slices of my environment.’

Ultimately, there’s a truth and timelessness to Kassan’s work because it is deeply human. His paintings resonate with the fragility and heaviness of life, delivering the message momento mori: remember your own mortality.

Those featured in his work are distilled in an exact moment in time, patiently contemplating their present. We share in this present-moment appreciation, this slowing down of time, and see life for what it is.

Kassan’s up and coming show ‘Solitudes’ will on display from September 13 to October 8 at Gallery Henoch in New York.