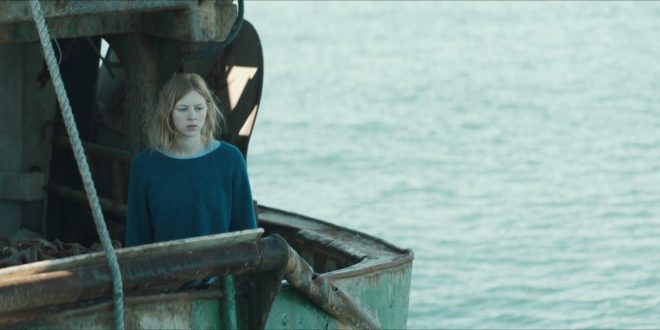 (This review contains some spoilers)

It’s an experience we might not be familiar with, but at its mention we instinctually feel a pang of dread. It’s the dread of being at sea for extended periods with the many phobias waiting to be ignited there, and the terror of the unknown expanse that remains for the most part unexplored (perhaps having had some of its secrets revealed to a select few who haven’t survived to talk about it). The mysticism of superstition at sea is ancient yet has somehow held its weight into modern times. Unfortunately, Sea Fever by Neasa Hardiman doesn’t deliver on the story lines that it sets up, but the potential they hold is hard to ignore.

Instead, it feels like a film taken away from its director and gutted by a studio to make it more palatable. It’s not quite a Creature Feature – we see the monster of the film once near the start and once later on and, while it’s interesting, its design isn’t exactly ‘featured’. And, its not quite a suspense – we aren’t kept guessing what the threat posed by the creature is. It culminates in a genre that’s more like a watered-down version of a few styles of horror.

Siobhán (Hermione Corfield) is an outsider who isn’t interested in, and doesn’t try to be interesting to, other people. Her red hair is seen as a bad omen by the crew of the trawler, and so begins the trend of interesting plot points being abandoned immediately after being introduced. The crew share some annoyed huffs and move on, without mentioning it again even at their most desperate moments. The ostracisation of the perceived dangerous, witch-like woman could have become an interesting plot point, adding to Siobhán’s role as an outsider and giving the crew an excuse to place blame on someone on board rather than accept the far worse terror at hand. Of all of the superstitions around being at sea, this one prevailed amongst the crew more than others. In the end though, it doesn’t affect the story so much as serve as superficial character development.

The title of Sea Fever is based on the poem by John Masefield, which is mentioned when a crew member quotes from it;

“I must go down to the seas again, for the call of the running tide
Is a wild call and a clear call that may not be denied”

Perhaps we will see something take over the boat, and the crew will become compulsively entranced by the creature that stalks them, desperately trying to get closer to the monster they are chemically or hypnotically swindled into loving. The poetic crew member later becomes infected and tries to ‘go for a swim’ despite the fact he doesn’t know how to. He doesn’t manage to get into the water but is successful in condemning this plot point to become another aspect of the film that is introduced and then dropped. No-one else who subsequently becomes infected acts with the same obsession, and the infection establishes itself as a literal, squiggly parasite.

Timing-wise, being released during a pandemic and having an infectious element to the central threat is a bit unfortunate. Seeing characters cry on each other, rub their faces and keep close contact with those they know to be infected invokes more feelings of frustration than sympathy for them. Even the smartest among them, Siobhán, doesn’t try to implement a quarantine among crew members who don’t seem interested in self-preservation. So, what might have been a minor plot hole a year ago instead becomes a major problem when it comes to caring for the characters on screen.

There aren’t many great horror films set at sea. However, considering the potential to create a film that utilises nausea inducing camera work, while tapping into the duality of both claustrophobia of close quarters and agoraphobia of vast, open water, I’m unsure why. In Sea Fever, characters move around their spaces with ease, none become sea sick (including Siobhán who is new to being at sea), and the camera stays suspiciously still instead of rocking with the waves. It doesn’t feel like the crew are on a ship, or that we are on it with them, and this is the dominant reason why this film doesn’t resonate. I can watch a film where nothing much happens story-wise if the atmosphere is gripping, but here the filmmakers relied on the (mediocre) story to do all the gripping for them.

Sea Fever doesn’t lean into an established genre and doesn’t seem interested in creating a new one. Contemporary horror films have a unique ability to take an idea that may already be well understood and make it terrifying again in a new light, so I don’t think an idea has to be totally new to be effective. That said, I would have loved to see this film go down one of the interesting tracks that it set up at the start and go wild with it. Instead, it stayed in the middle of the road with a result that made me wish I could watch an alternate story line of the same film.

(If you like the concept of horror at sea, try The Lighthouse by Robert Eggers, 2019, and Triangle by Christopher Smith, 2009.)

This review was written as part of the ARTS2126 Reviewing the Arts subject, under the mentorship of Dr Erin Brannigan.