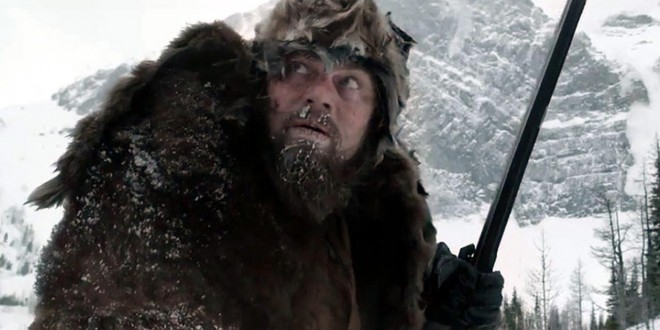 For a movie that runs for an agonising 2 hours and 36 minutes, the story of The Revenant is remarkably dull: Mountain man is left for dead by his squad. Mountain man swears to get his vengeance. So mountain man walks…and walks…and walks some more…to hunt down treacherous squadrons.

At first, the snoozy plotline is confusing and hard to reconcile because when you buy a ticket to see a “revenge thriller”, you strap yourself in for some hardcore action. Yet, after the opening sequence (an epic battle scene involving lots of arrows-to-eyeballs) there is a strange amount of quiet, and a lot of waiting-for-it-to-get-good-again. It’s dislocating and a little bit awkward.

Then somewhere in the course of the long, long, long journey, it clicks. You stop expecting action and start to realise that the periods of inaction are where the film really shines; where The Revenant shifts from a glorified western, to a kind of perverse analysis of the human instinct to survive. This is the watermark of Mexican dream team Alejandro Iñárritu and Emmanuel Lubezki, who last year won Academy Awards for Best Picture, Best Director and Best Cinematography respectively, for the dark comedy Birdman. This year, the tale of the walking mountain man sees them nominated in all three categories for the second year in a row–and they deserve it.

Having said this, there are some definite issues with the film, mainly to do with the character development; or complete lack there of. Mountain man (Leonardo Di Caprio) is at the centre of the story, but you don’t really know anything about him. You eventually learn, through intermittent dream sequences, that he had a Native-American wife who was murdered by a white colonist. The death implies the source of his will to survive–but this is never properly developed. The lack of background info is alienating and weakens the mountain man’s cause. You may find yourself, like I did, struggling to truly empathise with his hardships and his triumphs because you don’t fully understand his motivation, his story, his identity.

Which brings me to Leo. Outstanding actor and love of my life, I have waited years for Hollywood to acknowledge his awesomeness and give him the damn Oscar that he deserves. But I don’t want him to win for this. There, I said it.

Why? The role has so little dialogue, that a vast majority of the film is pure grunting, screaming, writhing in pain and frothing at the mouth. Yes, it’s emotional and yes, it’s raw and savage and brilliant by any standard, but it’s not quintessentially Leo. Unlike so many of his other films, you won’t come out of this one and think “only Leo could have pulled that off”. It’s disappointing, to say in the least.

Bottom line though? If you liked that episode of Man vs. Wild where Bear Grylls skins a seal to make a wetsuit, you will love the tale of the mountain man. I just hope your mid-movie-pee game is hella strong.