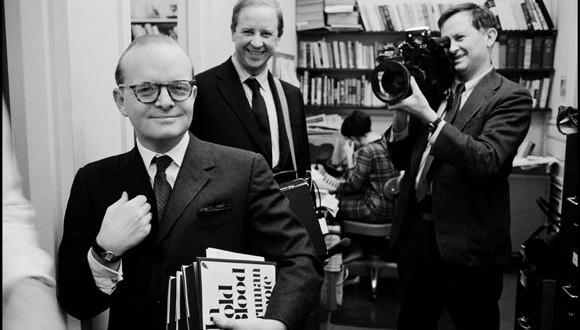 Holcomb, population 270, was a relatively quiet farming town in Finney County, Kansas, in 1959. Truman Capote himself acknowledged the fact that few Americans – in fact, few Kansans – had ever heard of Holcomb, until November of that year. And even if they had, they labelled it a “lonesome area”, somewhere “out there”. For this reason, it’s difficult to imagine such a town would be the set of a cold-blooded murder.

Lo and behold, a murder is committed and, naturally, Capote’s writer’s instinct kicks in. Inspired by a short piece in the The New York Times, he spent six years researching the story of Kansas famer, Herb Clutter, his family and the two young killers who, with four gunshot blasts, rattled the city of Holcomb and left the entire state feeling the aftershocks.

Capote wasn’t exactly a pioneer of the novelistic non-fiction genre, but his masterpiece, In Cold Blood, places the reader in the midst of all the commotion and the finger pointing with finesse. This is what makes it so frighteningly chilling. It’s also the reason why I couldn’t put the book down. And for those of you who silently scream at the sight of long chapters, you can rest easy. Although this novel only has four chapters, you’ll be so engrossed by the action you won’t even notice.

While he did receive some criticism for taking liberty with his artistic licence in recounting the Clutter family murders, he didn’t do it without a sense of reverence and emotional integrity. You wouldn’t be so utterly captivated by the novel if he didn’t.

Capote also delves into the warped psyche of the killers who, while being described as social dropouts and disillusioned romantics, are nonetheless the embodiment of evil. He masterly builds suspense by tracking their movements across the American Midwest and western states, white-knuckled, gripping the edge of our seats, as we wait anxiously for them to be apprehended and brought to justice.

If you’re a true crime enthusiast (ie. you’ve been glued to the screen marathoning Making a Murderer and The Jinx: The Life and Deaths of Robert Durst), this is where it all began, and is essential reading for any self-respecting buff. But if you can’t stomach the depths of human nature, best to stick with Breakfast at Tiffany’s.