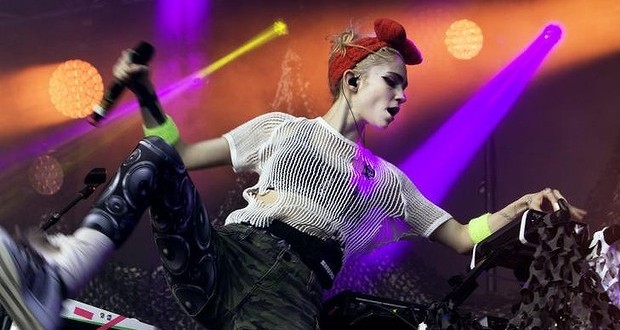 Claire Boucher is a creator of experiences. She’s stated before that Grimes isn’t just a musical project, but a visual one too: “It’s just easier to make music more popular”. This is apparent in her self-directed and acted music videos, and manga-style art accompanying each song in her latest album. She’s an artist expressing her ideas in any medium she can – so it’s fascinating to see the personal creative and aesthetic decisions made to reshape what is “Grimes” into a 50 minute show. At Laneway, she extends the distinctive, punchy-pop soundscape of Art Angels to super cool neon-guerrilla costuming, cracking songs, and a high-energy atmosphere that never lets up.
Her dancers set up a lot of that energy. The show opens with a contorting solo from one of them to a recording of “Laughing and Not Being Normal”, with its phantom strings and disquieting air immediately setting a tone of pop-theatrical unreality. Throughout the show, the two dancers cut unusual and beautiful shapes, occasionally bringing out streamers, stilettos and laser pointers to somewhat comically ornament already perfect choreography.

As for Boucher, she’s a funny and weird presence. She alternates, in a somewhat bewildering way, between possessed creature and nervous human. Her stage presence is one that exudes spontaneity and a sparky ‘go with it’ attitude. She yelps gibberish into the microphone in between songs; at one point she’s curled up on the ground as her voice gets more and more urgent, crackling into a monstrous, distorted howl (you’d expect her to lycanthropise then and there). Minutes later she attempts to explain why she hates talking between songs before abruptly giving up and just playing the next one.

And these are songs that explode into the crowd… there’s the visceral “Scream”, where Boucher raps in Russian and everyone on the stage opens their mouth to let out a terrifying roar come chorus-time like hard-core metal demons from the void. “Oblivion” gets the reaction it deserves, and she delivers – crunchy, throbbing beats paired with Boucher’s sinuous vocals filling the venue with a more intense vibe than the more understated recording (the subject matter of a traumatic life incident wonderfully and strangely contrasts its uncontrollably dance-y treatment). She closes with the phenomenal “Kill V. Maim”, a sickly sweet and unforgivingly vindictive banger (where she happens to take on the persona of a vampire Godfather). It’s a thrilling end to a perfectly realised show filled with unreal, blood-pumping fun.