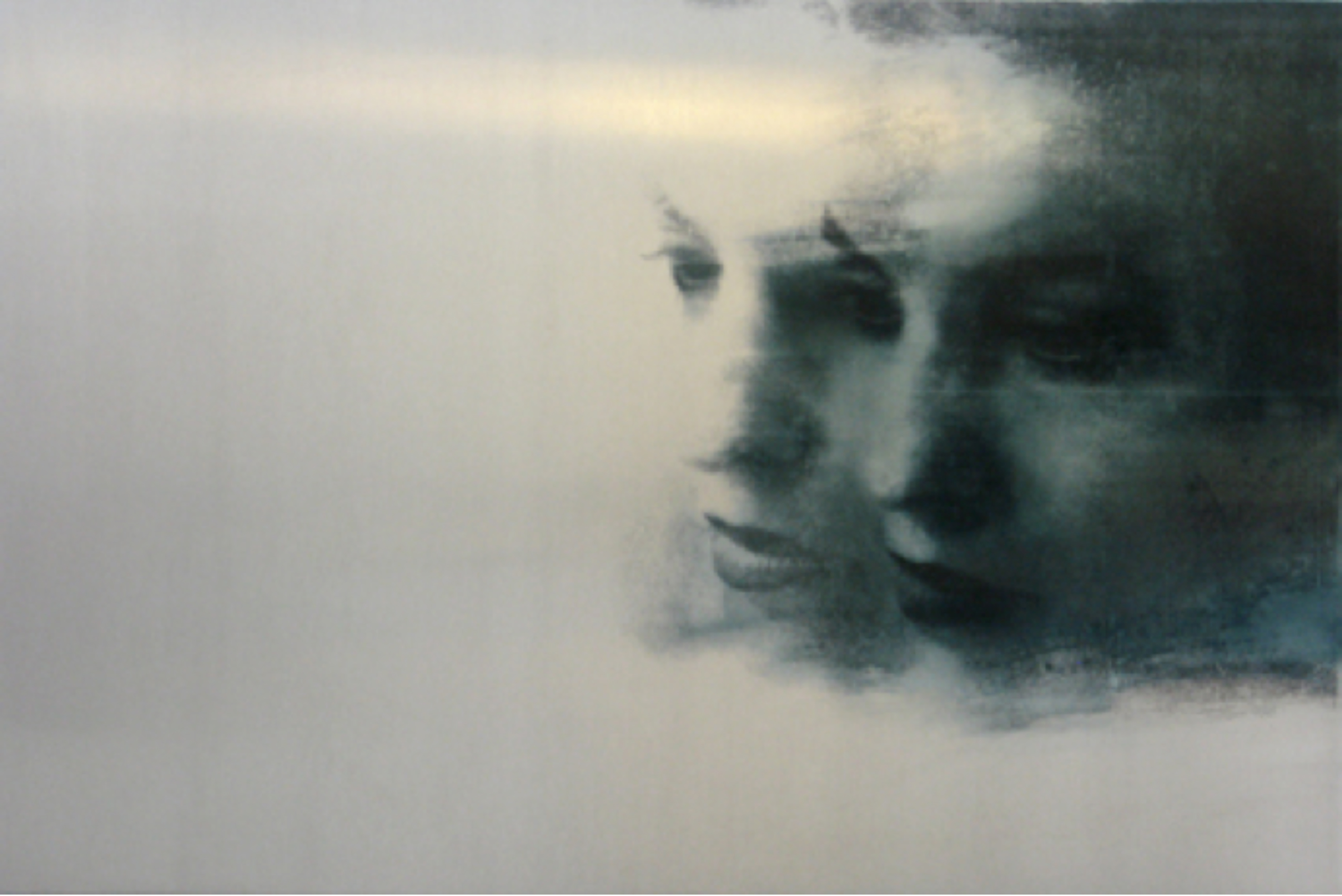 At first glance, the exhibition looked pretty sparse – grey panels on white walls wasn’t particularly arresting. But upon closer inspection, I noticed that out of the silvery screens emerged remnants of waves, skies and faces. There seemed to be a lot more than first meets the eye.

‘Head #4’ depicted two identical fragments of a woman’s nose and mouth. Both were visually eroded, fading successively into an expanse of aluminium. The echo of each image in the other created a shifting effect, which reverberated in the remainder of the work. The surface, although three quarters blank, was filled with afternoon light, reflections of its architectural surrounds and the inverted images of other works.

I was intrigued by how much was actually contained in the paintings due to their reflective surface quality and in despite of their inherent minimalism. This was due largely due to Myrebøe’s use of polished aluminium as a substitute for canvas or paper, as well as the unique process involved. The artist has transferred photographs onto reflective plates only to then defamiliarise them by overlaying them with highly pigmented oil paint. Despite the works’ visual ambiguity, they still had a photo-realistic gloss to them. The choice of medium defies a long-standing artistic tradition not just materially, but also in the way that the viewer is inevitably included in the works via their own reflection. Standing before the mirror paintings, I realised that I was ironically inspecting myself as much as I was inspecting them.

Nudity aside, there was a number of ocean-themed paintings, which due to the luminosity of the silver panels, glowed with an evocative sense of realism and depth. In one particular diptych titled ‘The Tide’, an eroded superimposed photo of dark, turbulent waves glistened with natural light. As your vantage point shifted, so too did the work’s reflections. This interplay of light combined with the swirling ocean current created a genuine sense of movement; the scene looked and felt real.

This was kind of ironic, given the minimalistic and obscured imagery featured in the panels that were for the most part, half blank. Not an avid fan of minimalist or abstract art, I suspect that if the works had not been on a reflective surface, they would have looked flat and unfinished. At worst, they may have even resembled those hideous ‘gestural ocean scenes’ that beachside motel owners seem to buy in bulk. Thanks to their metallic redemption, the works escaped this fate, and offered the viewer layered, convincing and beautifully alluring scenes.

The silvery panels were alluring because beneath their shimmering surface, they were ominous, ethereal and dark. Photo-realistic images were veiled by disfiguring paints strokes, reflective patches, and their own absence. The images slid in and out of focus and the viewer was offered only an after-image of what they were seeing. This ambiguity tied the works together, as if to hint at the ephemeral, intangible nature of life’s contents: peoples’ hidden sides, unanswerable metaphysical questions, and our allusive sub-conscious.

Impermanence and ambiguity unsettles us, but it’s what makes life so dynamic. At least this is what Japanese philosophy hits on when it draws a link between impermanence and beauty. One philosopher named Kenko wrote, “If a man were never to fade away like the dews of Adashino, never to vanish like the smoke over Toribeyama, how things would lose their power to move us! The most precious thing in life is its uncertainty.” The subject matter of Myrebøe’s works shimmer, fade, reverberate and slip away from us as much as the transitory reflections in their mirrored surfaces do. And in this uncertainty we recognise beauty.

Redemption by aluminium, ‘Drift’ is definitely worth a visit.

‘Drift’ is on display until March 31 at the Dominik Mersch Gallery, 2 Danks Street, Waterloo.