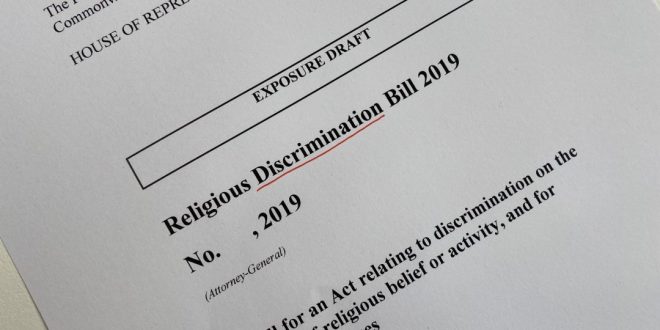 How the Religious Discrimination Bill Contradicts the Christian Faith

A person in the Bible asked Christ what the most important commandment was, and He identified two, not saying that one was more important than the other. The second was “Love your neighbour as yourself” (Mark 12:31, N.L.T.).[1] Everyone is our neighbour, and discrimination against anyone, for any reason, is a sin.

The other commandment was: “The LORD our God is the one and only LORD. And you must love the Lord your God with all your heart, all your soul, all your mind, and all your strength.” (Mark 12:29-30, N.L.T.) We are told to believe in God and be devoted to faith, and to love our neighbours, at the same time, by the same person. It is my view that both are violated by the Government’s proposed Religious Discrimination Bill 2019.

The stated aims of the Bill include making everyone equal before the law, without regard to religious ‘activity or belief’.[2] Amongst other provisions, the Bill would make it so that “statements of faith”, a term defined as anything that a reasonable person would consider to be a part of the speaker’s faith, don’t constitute discrimination. It is not enforcing itself through a Religious Discrimination Commissioner, but a Freedom of Religion Commissioner.[3] The Civil Aviation Authority, through their own regulations and if it is necessary for ‘the safety of air navigation’, will also have the ability to violate the Bill if they deem it necessary.[4] How many of us would feel comfortable violating our faiths to satisfy airport security?

Because of the emphasis on freedom to act, the Bill faces a large problem: God does not want us to discriminate and He does not want governments to tolerate our wrongdoing.

In Exodus 32:1-29, we are told how Aaron looked to appease a society, scared that God had abandoned them, by creating a false God for them to worship as the real LORD. Obviously, it was not and, like this Bill, it was a direct violation of God’s commandments. In fact, Aaron knew he was lying, but had to give the people hope. Like this, a Bill which removes protections against discrimination is no way to get closer to God.

(I am only able to speak about my own faith and what it teaches, and not majorly aware of the teachings of other faiths.)

There is no history in the Bible of God discriminating- why would He? He wants a relationship with all of His creation. But we cannot have a relationship with God if we place faith in other things- either golden calves, religious discrimination laws, or even the split-second judgement that we make of other people. It is also true that the Bill will strip the government of the ability to deter, or punish, discrimination against Australia’s residents. If we believe and act on the knowledge that God is satisfied with a government that is openly silent as His children are being persecuted, what then?

But, our error is not inevitable. The unnamed person in the Bible accepted and understood that loving God and loving our neighbours was God’s will (Mark 12:32-33). When He did this, Christ told Him “You are not far from the Kingdom of God.” (Mark 12:34, N.L.T.). While we are unable to see Jesus in the flesh, we can still obey what He has told us. Our lives are only temporary, but they still matter, and God can still use them. One can only pray against the Bill, and show the love needed to the people who may be lacking it.

Thanks to Michael Quinlan and Lydia Shelley for providing some of the inspiration here, and to the Attorney-General’s Office’s website for showing the second-exposure drafts of the Bill and related legislation. See Shelley’s article in The Guardian, ‘We’re being sold a convenient lie in the religious discrimination debate’, for further reading.

[1] N.L.T. is the New Living Translation, by Tyndale House Publishers.