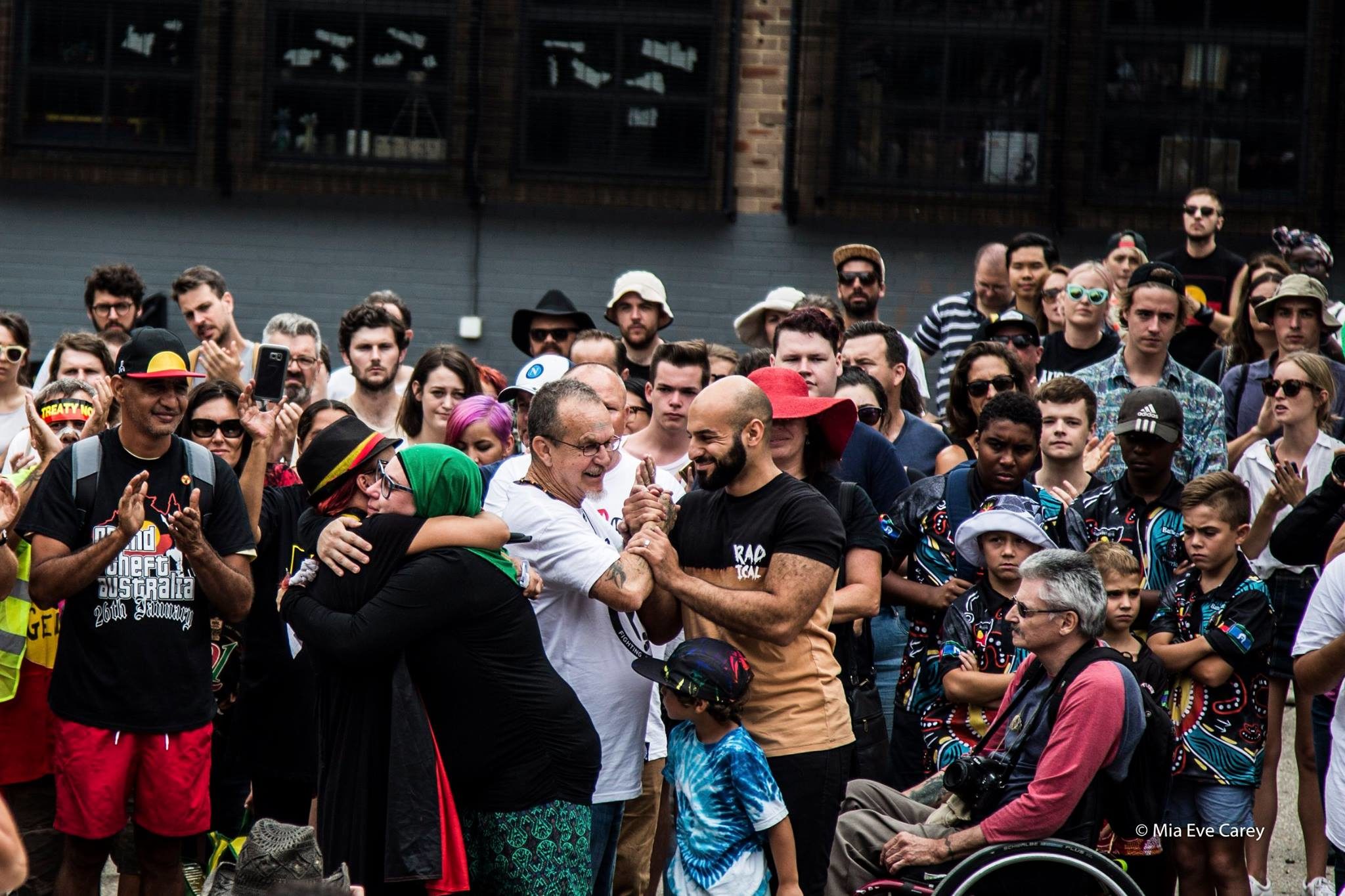 Reflections on the Invasion Day march: why police overreacted

On 26 January, thousands of people gathered at The Block in Redfern for Sydney’s Invasion Day march.  It began with speeches from Uncles and Aunties in the morning, followed by words of solidarity from members of the Muslim community, the Greens and the Maritime Union of Australia.

The march was largely a strong and peaceful show of resistance to the celebration of Australia Day on a date which represents the beginning of 229 years of violent colonialism and deceit.

Birrugan Dunn-Velsaco, the lead singer of Dispossessed, halted the march on Broadway Street, right outside the University of Notre Dame.  There, he addressed the crowd with a powerful yarn. He then laid a small Australian flag out on the ground and attempted to light it on fire.

However, at approximately 1:15pm, before Birrugan was able to light the flag, police stormed forcefully through the crowd towards him, spraying a fire extinguisher and wrestling with Birrugan and other crowd members.

This was a violent and unnecessary exercise of force by the NSW Police, which did nothing more than escalate a peaceful protest.  One second, I was watching Birrugan give a passionate yarn. The next, I had the back of a police officer barging up against me.

Crowd members were pepper sprayed; police officers copped water bottles to the face.  We were fortunate that the clash didn’t escalate further.  There were many children and elderly people in attendance who could have been seriously injured because of this absurd show of force from the police.

Flag burning itself is not illegal in Australia; however, flag burners can be arrested with public order offences and offensive or disorderly conduct offences. In this case, Birrugan wasn’t arrested, further demonstrating the police’s overreaction.

The crowd pushed onwards, and police retreated.  Chants of “too many coppers, not enough justice” and “no justice, no peace, fuck the police” echoed for the remainder of the march, as police adorned their riot gloves.

The march continued to Victoria Park where demonstrators flowed into Yabun Festival in a beautiful display of solidarity. Yabun saw record crowds on Thursday, and was the perfect exhibition of the strength and diversity of Indigenous cultures to bring the day to a close.

Previous I am an Indigenous woman, and I want Australia to #ChangeTheDate
Next UNSW Refuses to Release Trimester Survey Results, Claiming the Consultation Process “Wasn’t a Referendum”