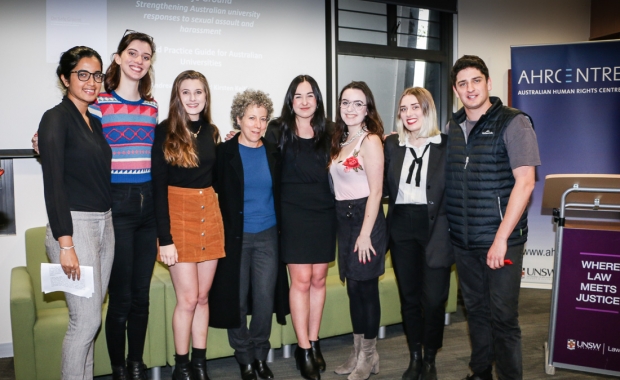 The survey revealed that 87 per cent of students who were sexually assaulted did not make a formal complaint to their university. Why? According to AHRCentre Director and lead author of On Safe Ground, Andrea Durbach, the most worrying explanation for not reporting was that student victims

did not think that what had happened to them was “serious enough.”

This answer reflects decades of silence and entrenched resistance to addressing sexual misconduct in our tertiary institutions.

On Safe Ground is a comprehensive roadmap for Australian vice-chancellors to change the culture of normalisation of sexual assault and harassment on our campuses.

The report is the outcome of a two-year research project commissioned by The Hunting Ground Australia Project. Primarily informed by the 2016 National University Student Survey and comparative international research, it delivers 18 recommendations and provides good practice responses in four key areas – systemic change, university policies and procedures including an effective reporting and disciplinary framework, student support services and prevention strategies.

Sophie Johnston, President of the National Union of Students, had a message for Australian vice-chancellors.

“You have the data. This report tells you what needs to be done ¼ and students around Australia will be watching,” she said.

NUS Women’s Officer Abby Stapleton called the 10-point action plan released by Universities Australia “meaningless” and condemned universities’ use of the smaller numbers of on-campus incidents to distract from the high rate of incidents at university-associated activities and off-campus events.

Familial and cultural considerations, the fear of visas being revoked and the difficulty of reporting to authorities in a second language are extra disincentives to filing a complaint.

With the education industry being Australia’s third biggest export, Abeyratne called attention to the lack of support for international student victims of sexual assault and harassment.

In his response, Vice Chancellor, Professor Ian Jacobs begun with an “unreserved apology” to victims and pledged to “work unstintingly and without reservation” to “implement all 18 recommendations” contained in On Safe Ground.

Durbach, previously a political trial lawyer who represented victims of apartheid laws, quoted a black woman casting her vote for the first time in April 1994.

“I’ve been waiting for this day for the rest of my life,” she said.

“This comment represents both the progress ¼ that we have seen in the last few months in the individual and collective institutional university responses to assault and harassment across Australia; but it also, as history reminds us, signals the beginning of a whole new chapter of struggle.”

On Safe Ground: A Good Practice Guide for Australian Universities is available here.

Share
Previous My Heartbreak Warrants Breaking a Promise
Next at fault