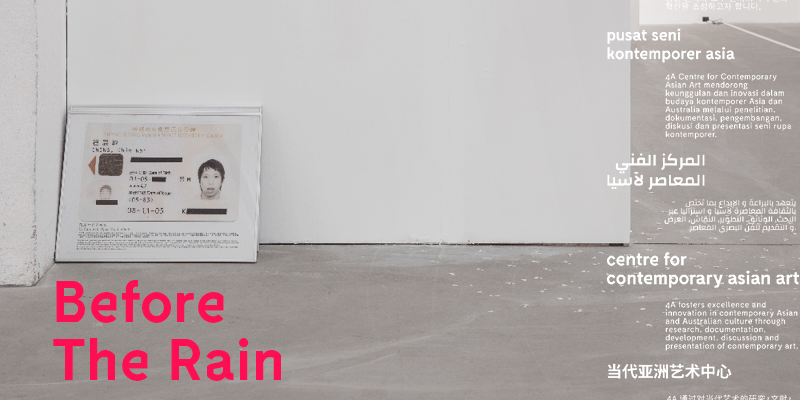 “Before the Rain” is Barely a Drizzle: A Review and Conversation with Sampson Wong

Before the Rain brings together different artists to explore narratives of civil disobedience and unrest, and to observe the quest to attain democracy. It’s a view from the other side – of those who lack democracy and seek it, rather than our alternative of having it and being unsatisfied by its outcomes.

It’s a perspective we might not often get a chance to see explored. However, despite displaying worthy intent, the differing voices of artists and curators never quite come together to create a cohesive, powerful experience. Instead, it feels like we’re told a story that’s piecemeal, scattered, and ultimately unsatisfying.

Unlike the overwhelming and surging nature of the protests, the exhibition feels compact and prim. One scan of the room reveals relatively few artworks, like the awkward initial gathering before the actual party begins. It feels similar, like there’s potential here, but it needs, just, more.

On display is a disparate show of items, which vary in size, time-period, and intent. There’s abstract video art from the last century next to detailed schematics of living quarters during protest times, next to a pile of printed out poems. Overall, they collectively poke and prod at the general issue from different angles, but due to their dissimilarities in tone, medium and effectiveness, it never really transcends just being a haphazardly assembled collection of curios.

At this incisive intersection between art and politics, there’s the expectation that a collection of informed, creative voices can create a conversation that’s rousing, subversive and memorable. But, it feels like low-level chatter and awkward silences, and we’re left wanting more.

Definitely contributing to this is the presence of individual, weaker works that fail to have any impact. They’re simply too obscure and irrelevant to us as responders, let alone being able to convincingly complement the other works.

It’s this individual inertness that the curators have attempted to mitigate by continually too-carefully orienting us to swallow specific context and perspectives in a way that ultimately comes across as overbearing. This once veers dangerously towards self-parody, as one statement assures us of the inherent humour of a piece, despite the work’s inability to evoke this. All of this simply draws unwanted attention to the awkward gap between what effect the curators want the art to have, and what effect it actually has.

That being said, there are some memorable pieces: a large video installation that conveys the excitement of youth in rebellion, contrasting the energy of Taiwanese students’ occupation of parliament with the chilling emptiness of the aftermath.

Another is a set of actual signs made to parody those used by police forces, changing the message “Stop Charging or We Use Force” into humorous expressions of anti-discrimination and love. Its vivid playfulness is memorable, made especially relevant considering China’s banning of wordplay. A single image imprinted on the wall imparts context at a glance, and lets the work stand on its own.

Interestingly, the most effective pieces are also the largest, and require little explanation; they quickly create understanding, and are able to evoke an emotional response. However, there are far too few of these works to overcome an overall lack of power.

Perhaps more enriching is my conversation with Sampson Wong, the leader of the Umbrella Movement Visual Archive and Research Collective, which sought to archive political art objects. While talking about how he’s been heartened by the “cosmopolitan solidarity” that he’s experienced in his conversations here and abroad, he also explains how there’s been a shift in Hong Kong’s contemporary art landscape from protest art to a more in-depth exploration of community, and how a sense of stability and independence can – and now, must – arise from this.

More specifically, he ruminates on the need to unite a population polarised by the failure of the protests, and how this created a shift in the role of the artist to focus more on strengthening smaller communities, being a part of life more-so under the general citizen’s control.

It’s refreshing to listen to a singular voice that’s still textured with other perspectives, and allowing it to illuminate current and fascinating happenings. It’s disappointing that the exhibition can’t emulate this, and that the ideas he mentions are never really explored within it. While the curators seem to position the exhibit to place importance on the future, and the state of being now almost three years after the Hong Kong Umbrella Movement, it spends so little time exploring this, and perhaps for the same reason, justifying its own existence.

Despite the efforts of drawing our attention to exciting, insightful questions with a diverse collection of created art and found objects — Before the Rain never quite comes up with a potent response.

Share
Previous More than Meets the Eye: A Brief Dip into the Depths of Culture
Next (Student) Bank Balance Confessions: Going on Exchange, “Living in Deficit”