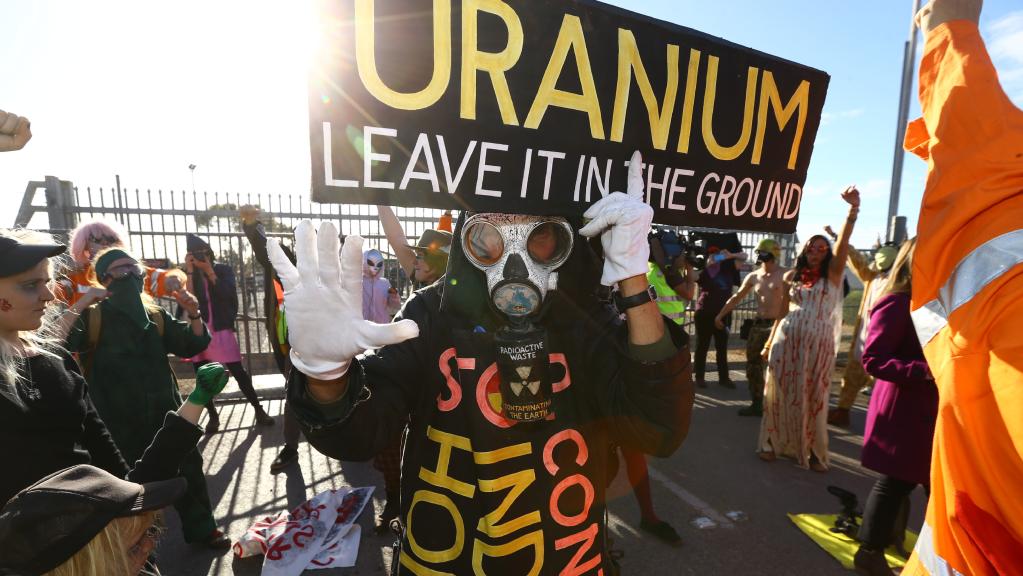 We live in a country that prides itself on democracy. But as I sat on cold red desert sand, 1800km from home, under the intense glare of police floodlights on election night, I couldn’t help but wonder. How can we make democratic decisions about issues that affect people who aren’t born yet? And what if these issues will affect those in the future so much more than they’ll affect those of us alive today? If I’m honest, I’m not convinced that our current model of democracy is doing its job for the present, let alone remaining robust for the future. As the night rolled on and the election results rolled in, the gurgling doubt in my stomach only got louder.

I had travelled over 20 hours in a cramped car to sit on that red sand, and if I had a Geiger counter I might have thought twice about parking my butt on it. Kokatha country, in remote South Australia, looks pretty nondescript from where I was sitting, but if I had eyes that could remote sense beneath the ground I would see that it is actually home to the world’s largest uranium deposit. For tens of thousands of years, the people that lived on this land reckoned with this unwieldy mineral through stories of the Kalta lizard. Today, we dig up the stuff, export it around the world and don’t ask how it’s being used.

Though I never got to see it, this uranium lying dormant beneath the surface was the reason I found myself camped out, two kilometres down the road from BHP’s Olympic Dam mine, tent pitched in the scrub with a few hundred others for the ‘protestival’, The Lizard Bites Back. We were gathered to bear witness and to show that we have not forgotten. Not forgotten the battle thirty years ago as elders lay their body on the ground in front of bulldozers, attempting to stop this facility being built. Not forgotten that this mine continues to operate, out of sight and out of mind, shipping radioactive stuff across the seas where it sometimes gets loose and poisons land and sea for generations. Not forgotten that this mine uses more than 35 million litres of water per day, drying up ancient soaks for miles that Aboriginal people have survived on for generations upon generations. Here, we sit around campfires, listen to the stories Uncle Kev, recite the poems of old activists, and imagine a past and a future that are connected by the decisions we make today.

I think it says something about our so-called democracy that expressing dissent against this mine is now only possible at the fringes – a motley bunch of ‘radicals’ dressing up, blocking gates and roads, and getting a few minutes of airtime on the news as a condescending voiceover recounts the days events. Out of shot, the majority of the South Australian police force surrounds us with surveillance to make sure our play never gets too serious. On horses, on dirt bikes, in jeeps, and in helicopters with spotlights bright enough to force my eyes involuntarily shut, they remind us that there’s a new law on this land now, and it’s a law that doesn’t heed any sleepy subterranean lizards of the dreaming, nor the dangers of which they speak. We are permitted here as long as we play by the rules. I think, whose rules?

On the endless plains of red sand and under the open starry sky, there’s plenty of space to think. I look at the map on my phone and feel dizzy at the scale of it all – how far away I am from anything familiar, how huge the mine site is compared to my body. I remember from class that a guy called Beck said our contemporary age is defined by risk. I think about how risk is never objective – what’s acceptable to me might be blasphemy to you. In the desert it was more obvious than ever to me that what is ‘acceptable’ is usually not up for contest, but defined by those who already hold power. More often than not, communities and traditional owners don’t have that privilege.

So where does that leave us? Staring through the heavy-duty fences at the entry of the mine, I wonder what it would take to ever say no to a development like this. What it would take to shut something down on the basis of a loss of culture instead of a loss of profit. I’m doubtful it could happen, and I’m positive that if it did, it wouldn’t come about through playing by the rules. Or at least, not these ones.

Tired and beginning the long drive home, we pass by Wallerberdina station on the land of Adnyamathanha people. An ex-Liberal MP leases it and has offered it to the government to become Australia’s first nuclear waste dump, in return for four times the property price. He didn’t need to ask his neighbours, or anyone else. No matter that nuclear waste has a thousands-of-years legacy and a shoddy track record for staying put.

We drive on, I sigh. The election results still aren’t in. I can still hear the echoes of the conversations it started – borders, jobs and growth, security. I want to talk about sovereignty, real democracy, and how we value the land and our future. If uranium doesn’t create the space to start having these conversations, then I don’t know when else we will.