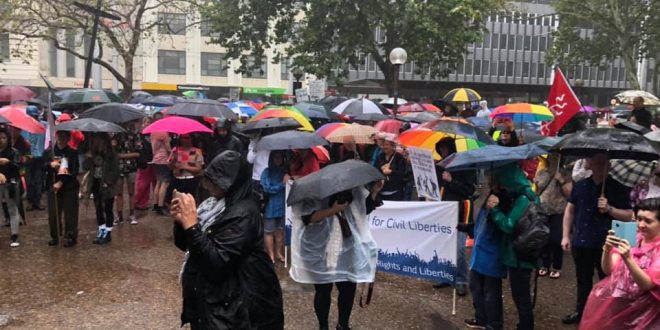 A collective of LGBTIQ organisations and their communities abandoned weather worries to rally against bigotry on Saturday, as hundreds marched in the Sydney rain protesting the Religious Discrimination Bill.

Gathering at Sydney’s Town Hall at 1pm, leaders of LGBTIQ, Muslim and Disability communities spoke out in the rain against the proposed laws which, if passed, would give individuals the power to discriminate against, intimidate and degrade minority groups under “statement of belief” exemptions.

Led by Prime Minister Scott Morrison and Attorney General Christian Porter – who together drafted a second bill to appease conservative religious organisations – and supported by the Coalition, the bill threatens all previous discrimination safeguards protected in Australia by law.

“[There is] nothing about freedom in this bill. This bill is an absolute disgrace that would take us back decades. It would put most of the population at the mercy of a minority of bigoted Christians”, said April Holcombe, protest organiser and leader of Community Action for Rainbow Rights (CARR).

Under the bill, health providers would be allowed to deny women and LGBTIQ people access to treatments. Religious hospitals and charities would be given the right to discriminate in their provisions of employment and services in order to “preserve the religious ethos” of that institution.

Nathaniel Mitchell – a transgender man and nurse working in the public health system –  protested that the Prime Minister and Liberal government are “gleefully destroying the health and safety of the LGBTIQ community, women and other minorities.”

“[Doctors are] stating they won’t be providing certain services to women generally. There are doctors who refuse to care for children because they have two mums, and doctors who have turned away LGBTIQ people because of their sexuality.”

Dr. David Abello, President of People with Disability Australia, also voiced concerns about the possibility of services being denied under the proposed bill.

“Many people with disability use services, health care and supports in their daily lives. We should not, because of who we are and our views, have to confront discrimination of any kind, including discrimination of a moralistic or religious nature when we access a service”, said Dr. Abello.

According to the Public Interest Advocacy Centre (PIAC), a person telling someone with a disability that their disability was a “trial imposed by God” would be protected under the Religious Discrimination Act due to their “statement of religious belief” and would not be found to have breached federal, state or territory discrimination laws.

“We should not have to hear public anti-queer or disabling speech or comments that may be privileged by the Religious Discrimination Act”, said Dr. Abello.

Whilst the Australian Human Rights Commission (AHRC) has praised the Religious Discrimination Bill’s core aspect – prohibiting discrimination on the grounds of religion –  the bill has ultimately failed the AHRC’s evaluation twice. In a submission to the Federal Government, the AHRC described the bill as being “inconsistent with international law.”

“[The bill] will enshrine prejudice and discrimination into law, it will provide economic rewards for discriminating against others, it will cause further cultural, religious and economic divides that will benefit the rich and entrench privilege”, said Lydia Shelly, a lawyer of Muslim faith and committee member of the NSW Council for Civil Liberties who spoke at Town Hall.

“We should be providing more protections for LGBTQI people, for people with disability, for women and people of colour, but here we are with this government entrenching bias, entrenching bigotry and entrenching xenophobia”, said Faruqi. For the crowds marching under rainbow umbrellas, the sentiment of the rally was captured by event organiser Patrick Wright: “No compromises – we want to Kill This Bill!”

Share
Previous Good Code, Dangerous Ideas: The Dark Side of Open Source Culture
Next Meet the Clubs and Societies of UNSW! Beginning of Year Q+A