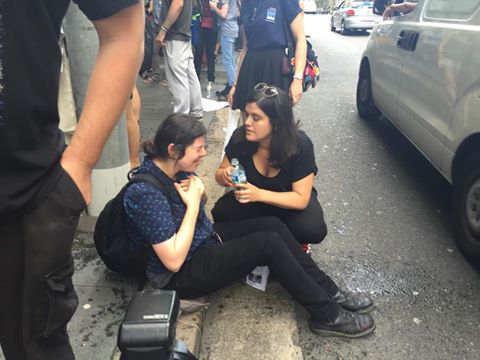 About thirty students have been pepper-sprayed today when confronting Christopher Pyne in Sydney’s CBD.

The protesters, including a delegation from the UNSW Education Collective, were gathering to condemn Mr Pyne’s changes to higher education at the Masonic Centre.

When security failed to stop the protest moving into the building’s lobby, they resorted to mace to settle the situation.

About ten students were directly maced in the face including UNSW’s Anna Amelia, while dozens of others breathed in the tear gas.

“Christopher Pyne entered the building. We entered the lobby to make some noise and the police overreacted. It was hugely disproportionate. They could have pushed us out without violence, but instead they resorted to capsicum spray,” Anna said.

“The use of capsicum spray on peaceful protesters goes against the democratic nature of Australian society.

Along with several other students, including Dylan Lloyd and this reporter, SRC President Billy Bruffey was one of those affected by the tear gas.

“Chris Pyne and the NSW Police should be ashamed by these repressive tactics.”

“All we wanted was a chance to show Chris Pyne how we felt. If we weren’t moved along by security, and if we had some indication he was aware of our presence, it wouldn’t have ended so horrifically,” she said.
“This proves the kind of opposition we are facing as students. They aren’t willing to engage in debate or listen to those of us who will be harmed by their reforms.”