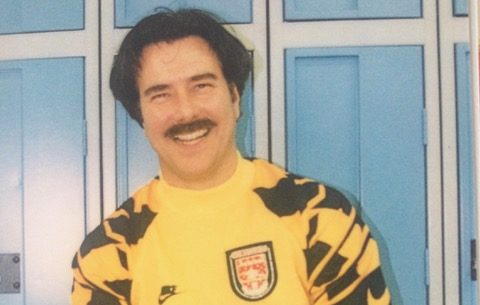 A Picture Pays a Thousand Dollars

In a world obsessed with celebrity, what would you do if you happened to look like one of your heroes? Chris Savill, a quietly spoken family man, describes a twist of genetic fate that lead him into the world of a celebrity lookalike.

When retired Arsenal goalkeeper, David Seaman, became a household name after the 1996 Euro Cup, Chris Savill could no longer leave his house without being photographed.

“When I go into any restaurant, shop, even a set of traffic lights people will yell out ‘Seaman’, and ask for an autograph or a photo,” said Chris.

Initially, Chris overlooked the remarks about his uncanny celebrity resemblance, but he soon became swamped by the increased attention.

Chris realised things had got out of hand whilst sitting amongst a crowd at an Arsenal game one night in the late 90s. Sporting his scarlet club shirt with pride, he was perching eagerly on his seat in the grandstand when an announcement was made. News that Arsenal’s star goalkeeper, David Seaman, would not be playing that evening disseminated in a booming echo throughout the arena.

Chris felt a sea of maddened eyes boring into him.

“Everyone thought I was him [Seaman] sitting in the crowd, so the whole crowd began waving, clapping and shouting ‘Seaman, Seaman,’” Chris explained.

“‘He’s here,’ they continued to call. It was a very surreal experience, when really I’m just a nobody.”

The phone rang hot with agencies asking Chris to consider joining the obscure and artificial world of celebrity impersonation. Initially Chris declined, but his mind became plagued by the opportunity for an adventure.

A career as a celebrity impersonator is a shady but lucrative business, where your ability to look like someone else can earn you the average person’s monthly wage in a single photo.

Chris has appeared in ads for major brands including Nike and Umbro, and was even asked by the notorious adult publication, Penthouse magazine, to pose naked as David Seaman. In a persuasive plea, Chris was reassuringly informed that he would be given the ample coverage of a sports glove for the shoot, whilst being positioned amongst a sea of women.

There are other additional benefits.

On a family holiday in Mauritius, the hotel staff were convinced that Chris was David Seaman.

“We tried to explain to the hotel staff I wasn’t him, [but] they were convinced I was, and for the whole time we had the best beach front restaurant seat and we never waited for a table… seeing the kids’ faces was great and it clearly made them very happy, which was a highlight,” Chris said.

Despite the opportunities, Chris said he wasn’t ready to exploit Seaman’s name. He turned down the Penthouse magazine shoot offer.

“I told them no, I would never want to damage David’s reputation. I’m not in it for the money, just for the great experience,” he said.

At a bar one evening, Chris was asked for an autograph. Impulsively, he scrawled the signature of his famous counterpart.

“As I handed it to him I was greeted with a smirk. ‘Not bad he said… I’m David Seaman’s lawyer.’ And he shook my hand,” he said.

“Fortunately for me he was very understanding and said David wouldn’t mind as long as I didn’t do anything to embarrass him, so I never did.”

Although Chris found out that most celebrity doubles don’t share his morally grounded approach to the industry, and he soon discovered an uneasy hierarchy in the profession, where Hollywood lookalikes could enjoy years of well-paying work.

“I once met the Princess Diana lookalike who made 12,000 pounds a photo,” he said.

He even met a lookalike who had lost touch with reality, a James Bond double who had bought himself his own Bond car, but upset fans by shooing them away and refusing autographs.

But Chris always knew that his own career as a sports star lookalike would be short and sweet.

“I’ve always stayed very grounded … the career of a sporting star is much shorter, whereas some of these Hollywood actors last a life time in the spotlight and therefore so do their doubles,” he said.

Although, he admits that life as a lookalike isn’t always easy.

“I once tried to explain [to a woman] that I wasn’t actually David when I was asked to take a photo with her kids,” said Chris.

“This was shortly after David split from his wife, and she started verbally abusing me saying I was horrible and that she heard I didn’t even buy my kids Christmas presents. Now I know to just take the picture and carry on.”

Despite opportunities including an all expenses paid trip to Dubai, Chris decided to end his lookalike career when physical moderations to remain looking like David Seaman went too far.

“I drew the line when he grew a pony tail.”

Share
Previous Kawa Akari (川明かり, “Riverlight”)
Next Honey I … Am Stupidly Impressed by the Kids