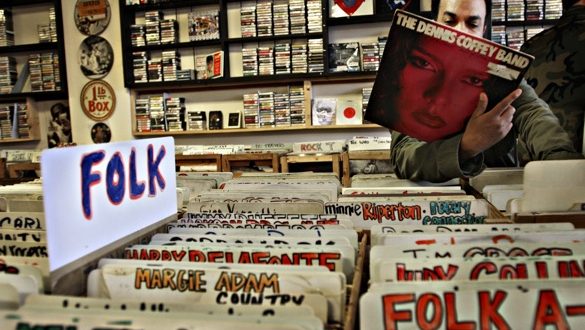 Be Patient. Listen to the Album.

In the boom of singer-song-writing that burst out of the 1960s and 70s, no one was worried by singles or hits – the true form of music, was a really good album. A long and dynamic storyline, or a kind of narrativeless rollercoaster, more coherent than grape-hubba-bubba to a shoe. Since first falling in love with Blue by Joni Mitchell, Asylum Years by Tom Waits, Bridge Over Troubled Water by Simon and Garfunkel and Grace by Jeff Buckley, I have been aching to find the musicians of my generation who hold a candle to them. But recently, I have been entranced and powerless to escape the near perfection of these four albums that do just that:

The first is Hopelessness Blues by Fleet Foxes.

The second is The Positions by Gang of Youths.

The third is The Phosphorescent Blues by Punch Brothers.

The fourth is Blood by Lianne La Havas.

I write this to implore you to take the time to undress your favourite music. The album is an incredibly expressive form – and so very neat. Each a full and buxom flavour of their own, these albums unfold tender spots, and ragey-spots alongside each other. So I whisper, half praise, half prayer, the album is back on the rise. These musicians are lifting the game of the whole industry simply by leading in it, and if you don’t believe me yet, here’s why in 50 words or less:

If the opening line, ‘So now I am older than my mother and father when they had their daughter, now what does that say about me’, doesn’t catch your throat like a little fishing hook of reality, then wait a few years and listen to this again. The lyrical mud-cake of this album explores through harmony reminiscent of Crosby, Stills and Nash, the tang of growing older. Uncompromising realism fights glowing optimism in this soul-searching album that chronicles the emotional sin-wave of any twenty-something on a monthly basis.

Somehow Gang of Youths has succeeded in capturing the sound of Sydney: tenacious, transcendent and that hard to pinpoint dream-fatigue. But more than the wrenching narrative of the album that gets you teary-eyed and swinging for a fight, their ability to marry brutality and delicacy in lyrics will leave you out of your own skin for an hour. All of this besides the plain and undeniable greatness of them calling their genre ‘basically dad rock.’

Leaving the magnitude of frontman, Chris Thiele’s musical capability aside, this blues album breaks all the rules in the tastiest way. Like all Punch Brothers’ work, the technical work is what pushes them into the stratosphere. However, this album is characterised by lyrics with real smack and a continuous narrative of frustration and fulfilment in the music scene around them.

Firstly, her voice will arrest you – a nimble flickering between strength and husky depth to marshmallow loopy heights sure to strike you dumb. Stories of brazen independence and vulnerable dependence bounce the album between her two selves. Unexpectedly, twisty sonics and delving lyrics will call you back to her with your full attention for each song. The most truly feminine composer and lyricist since Joni Mitchell herself.