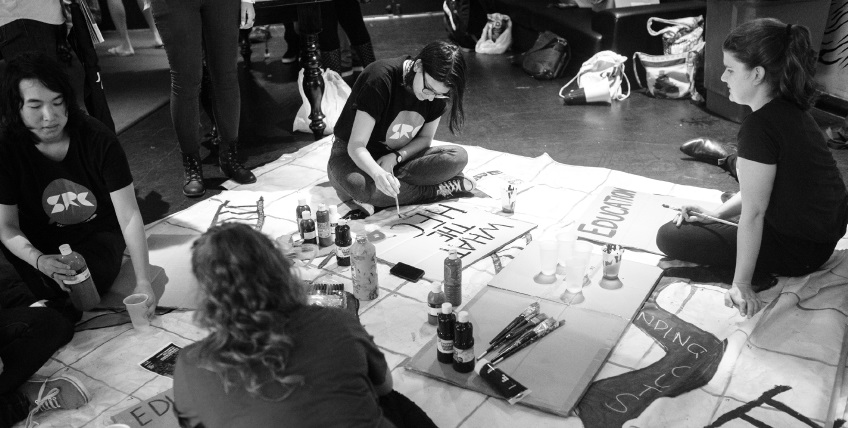 Party before the protest The “March in March” rallies held around Australia, perhaps more than emphasising the various grievances the left have with the Abbott government’s policies, called into question the effectiveness of mass protest as a political weapon.

It was not the outpour of genuine, often heartfelt sentiment from protesters, but the tongue-in-cheek response of Prime Minister Tony Abbott when asked for his views on the campaign that defined the day. Rather than criticise leftists and their politics, Mr Abbott donned a sly smile and pretended the interviewer was referring to the St Patrick’s Day Celebrations that were held on the same weekend.

The quip, so easily shrugged off, is actually a sophisticated political move for two reasons: First, it shows that conservatives are beginning to realise their silence is more effective than criticism, and second, and by far the more confronting of the two developments, that Tony Abbott has demonstrated his ability to use irony against the left.

Abbott’s response was reminiscent of the almost complete lack of coverage the March in March got from the media. The event, which saw over 50,000 people take to the streets, received scant media attention, and much majority of coverage it did get, bemoaned the public indecency of the protesters.

“These were not mass protests of the size and style of the Vietnam era. They weren’t as large and certainly not as violent and disorderly as civil rights protests in Queensland in the 1970s and ’80s. But they were large enough to be worthy of more basic news coverage than they received,” writes John Birmingham of the Brisbane Times.

But it was not just conservatives that weakened the left. Federal Opposition Leader Bill Shorten’s acknowledged that the March in March protesters were exercising a democratic right, though without lending any moral support to their cause, underscores the deep mutual estrangement of the Labor establishment from its traditional voter base.

This was also true of moderates more generally. Sydney Morning Herald (SMH) columnist Jacqueline Maley, in her recent article, “March in March: Two sides of the story we didn’t run”, highlights the self-defeating elitism of the radical left and their antagonism of moderate liberal media outlets capable of getting the message out there. In a cerebral dig at left-wing zealots, Maley writes, “It is strange that people who despise the MSM [mainstream media] so much are so angry at being ignored by it.”

She claims that the lack of coverage was due to the movement’s lack of clearly defined goals, a criticism that was frequently made of the Occupy movement. She emphasises that the likely reason SMH did not pick up the story was because they had no coherent message, with complaints ranging “from asylum-seeker policy to gay marriage to fair trade”. Indeed, the present political system seems far too pluralistic for any sort of convergence to occur. It would seem that the common element to these protests is really anti-liberal-democratic – a sense that the normal channels of democracy have failed the Australian people and the structure of politics no longer can accommodate them.

But for all the buck-passing the radical left engage in when asking why they have become so marginalised by the “mainstream” political discourse, at the end of the day, the role of modern protest is simply to raise awareness. Despite some unrealistic placards calling for referenda or votes of public confidence on Abbott’s policies, this should be a top priority. It follows that a snubbing from major media outlets, even from the Murdoch Press, is a serious problem.

Negative views of the radical left are commonplace in Australian public life, a fact underscored by Maley’s reply article. She responded to accusations from co-ordinators that Fairfax was part of a corporate media conspiracy to “blackout” any serious coverage of the protest, which canvassed serious anti-business views such as opposition to the Trans-Pacific Partnership and the recent government-funded loan to the tune of $110 million for an offshore joint venture between BHP Billiton and Rio Tinto.

In defending herself and her publication, Maley demonstrated the moderate’s repulsion for heated left-wing activism. She brackets the March in March with last year’s Anti-Gillard protests, and writes, “The left does itself no favours if it resorts to insult, vitriol, and mad muttering in dark corners of the internet,” regardless of the validity of its claims.

Operating within a political culture that pities and ridicules the stoic, crusty left-wing protester, the SRC is looking at alternative ways to engage studies and attract them to their cause. On March 26, it experimented with a “festival”-style pre-protest party, with food and a DJ, to help the “Abbott: Hands off our Education” rally.

The National Union of Students initiative opposes the $2.3 billion in proposed cuts to education spending under the Abbott government.

The new revamped style of protest is the brainchild of SRC Education Officer Billy Bruffey, who acknowledges the misgivings many students have about left-wing activism. He says that the current culture of student apathy is regrettable since the cuts have a direct impact on students, and are not just abstract discussion. But he still sees potential in UNSW, saying, “We’re just as big as USYD, and equally if not more politically progressive.”

Bruffey says the SRC modelled the “pre-protest party” on Chilean protest movements that emphasise community and festivities – they hope that this will counteract the perceived drudgery of student activism.

“There is a groundswell happening at UNSW. We are getting activists who are actually passionate about their education and about making sure student services, clubs and societies, and people at UNSW are adequately represented and get a proper education,” says Wilson.

Bruffey added, “This has been building for a couple months now, and even though we’ve been rained out and didn’t get as many numbers as we hoped for, today really represents a good start for the education collective and activism on this campus.”