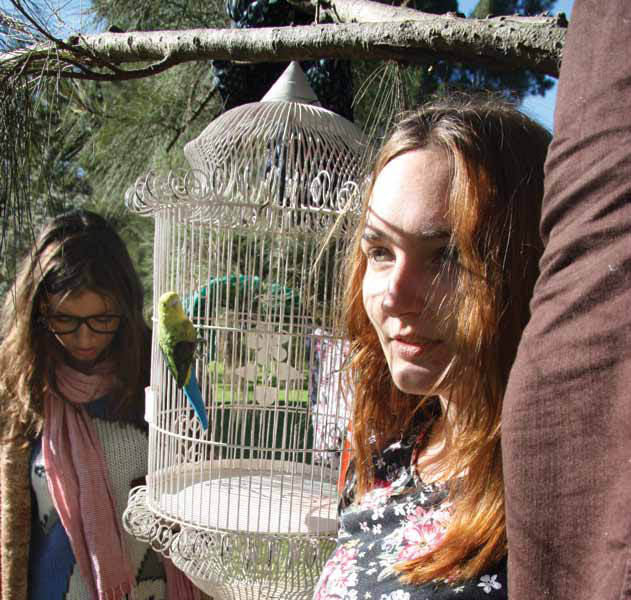 Sunella Jones tells Wankie how to do market in contact with nature. Wankie: This is a garage sale in a park?

Sunella Jones: Yes, but I prefer to call it a Park Sale. I don’t have a garage, and I especially don’t own a car. Ew. I thought it would be a better idea to have this sale in the natural environment out here. I got the idea for selling in a park when I lived in Brooklyn a few years ago, and regularly attended the weekend markets out by the river. I was surprised that we don’t have more events like that in Sydney, so I’m trying to change that.

Wankie: Have you sold much today?

Sunella Jones: No. Not really. I boycotted advertising the sale as a culture jamming experiment that was inspired by my 1994 edition of Résistance à l’Aggression Publicitaire that I found at a market while interning at food truck selling Salade Niçoise and Ratatouille just outside Montpellier during the summer a few years ago.

Wankie: Tell us the history of your bird cage?

Sunella Jones: When I was a child I was fascinated by Nordic culture. I took a year off my art history degree to live in a town called Kolvereid for a year where I had an incredible time working on a fishing boat using traditional stick-and-string methods to catch arctic charr. We would then salt and ferment the catch to make traditional Rakfisk. On one winter night, I pulled this cage out of the icy Fjord and took it back to my sisters boutique in Melbourne. I hitchhiked down a few weeks ago to meet her new girlfriend who’s been living in Christmas Island for the past few years and decided to take the cage back to Sydney. It’s not for sale. Wankie: That shirt looks amazing too.

Sunella Jones: Oh I love this shirt! It has such a rich history. I bartered my passport for this item from a street vendor when I was living at a holistic healing farm-stay in the Philippines fairly recently. I realized that owning a passport was the easiest way for governments to keep track of your movements around the world, and I just didn’t need that in my life anymore. We’ve had a few ducks come and hiss at the shirt in the last hour, so it’s probably not going to last.

Wankie: What music are you playing now?

Sunella Jones: Hashtag Whatever. They’re an experimental band from Berlin that just finished touring in Ethiopia. I met them while I was helping with running a pirate radio station out of an old Air Traffic Control tower at the disused Templehof Airport. I was in charge of the night shift, and they came in to play on-air, and we just hit it off. They mainly play frequency-core, which is a variety of frequencies above and below the range that humans can detect aurally. I admire that in a band. Not everything is about what you hear, you know?