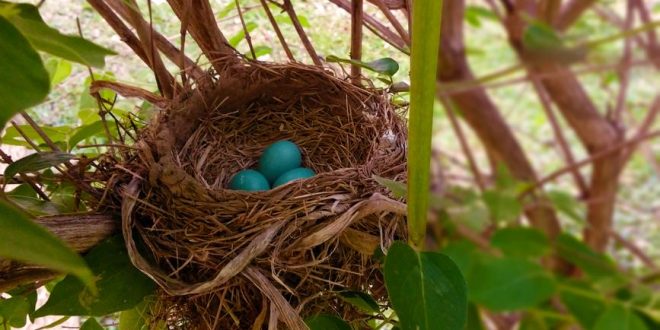 Over fifty species of cuckoo are brood parasites. They lay their eggs in another bird’s nest and fly back home, while their non-cuckoo hosts are left to do all the work. The resulting chick is demanding. It quickly outgrows its foster parents in size, volume, appetite. It’s a wonder how they keep up, forced into such a foreign situation, with no escape from the strict rules outlined by parental instinct. Are they stressed? I feel stressed just watching them. The shrill cries of the cuckoo chick can be heard from all corners of my house and I am reminded of how powerless I am in the world.

I don’t believe that the host parents would harbour any kind of resentment towards the chick. I try to be aware of when animals are anthropomorphised to such an extreme degree, something that already occurs far too much for my liking. We say that they symbolise freedom, only because they can fly, but a bird is no freer than any other animal. They do what their instincts tell them to do. For the adult cuckoos, their instincts form a path of freedom. The host birds are trapped. But they don’t feel trapped, and the cuckoos don’t genuinely unburden themselves – this would require change, but none has occurred. One pair of birds continues to rear young, while the other consistently avoids doing so. I will not misrepresent these actions through the twisted lens of our ideals. I refuse to romanticise.

Instead, I stare. Every spring, a pair of cuckoos migrate here, where I assume they were born, and begin the ordeal of sneaking their eggs into the nests of local birds. My stomach churns. I listen to how they scream louder than any other bird here, as the currawongs, the miners, the magpies, in a feat of aerial magnificence, fuelled by a fearful, instinctual frenzy, mob the cuckoos in their desperate attempts to keep them away from their nests. I wonder how much they know about the cuckoos, the future they might bring. I love my local birds, and part of me wants to hate the cuckoos. Hate them for the panic they cause, the potential lives they take away to replace with more of their own. I know that I am lucky to be able to bear witness to such complex forces of nature in my own backyard. After all, it only happens a few weeks of the year. But the battle of empathies that takes place within me is too much to bear. There is no universe in which both parties succeed. All I can do is stare.

When I go back inside, my thoughts follow me. I long to be the migratory cuckoo, free to do as I please, but I will never grow past being the chick. Limited by overwhelming needs I can’t control, forever helpless. Needing help isn’t a bad thing, but I’ve struggled to convince myself of that fact. The bigger fear is the thought of leaving university, becoming the host parent desperately trying to live up to the pressures that have been placed upon me, while still being the same baby bird. No real control over the people and circumstances I face, fully aware that this freedom I’m told to look forward to is nothing more than an illusion. I can never live completely free of my burdens. I can only hope that it gets easier.

Share
Previous Living in Yesterday
Next The Snowy Ranges