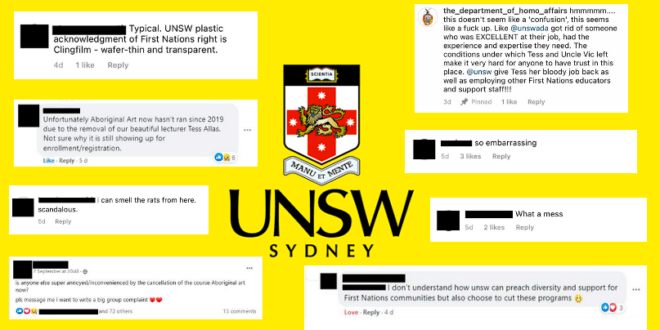 With the abrupt cancellation of DART2310 days before the final trimester, we have reached a grim reality. It has been two years since Indigenous knowledge has been taught at UNSW Art and Design School.

Despite having full enrolment and a waitlist of eager students, DART2310: “Right Here Right Now: Aboriginal Art Since 1984” has been cancelled three times (during Trimester 1, 2, and 3 of 2020) since Tess Allas’ dismissal. And only one week ago, DART2310 was cancelled once again.

24th September marks the two-year anniversary that the Director of Indigenous Programs at UNSW Art and Design School “Aunty and Matriarch” Tess Allas was dismissed. Tess was informed on no grounds given, that her contract was not being renewed and her position was being terminated, by the Dean of Art and Design School, Ross Harley.

Tess is a Wiradjuri woman and a globally respected lecturer, curator, and writer in the field of contemporary Indigenous art. She wrote, convened, and taught the only Indigenous art course that is offered at A&D, DART2310 “Right Here Right Now: Aboriginal Art Since 1984”. Which is known for its outstanding student evaluation scores.

According to alumni Bec O’Shea, who took the course when completing her Masters in 2012, the course, “was so popular and almost always had a waiting list.”

Yet since 2019, UNSW Art and Design has failed to provide postgraduate and undergraduate students access to Indigenous knowledge-based courses despite their various, now seemingly redundant, statements about the importance of Indigenous knowledges in our anglo-institution.

It is an understatement to say the Art and Design cohort were dissatisfied to receive an email from the Head of Art and Design School Professor Edward Scheer on the afternoon of 7th September (Appendix A). Students were notified less than a week before class started that the course was to be cancelled for yet another year.

Professor Scheer, explained, “our sessional tutor had to withdraw for personal reasons.” However, he continued to reveal there are “no [First-nations] staff available at present [at UNSW A&D] and “we are in the process of appointing two new staff members from First Nations backgrounds.”

For many, their enrolment in the upcoming trimester was their fourth bid at taking the core course.

Nico, a current UNSW Fine Arts undergraduate who tried to enroll in the course throughout 2020 commented, “The cancellation was really disappointing, not only because of this continual letdown. But also because of the inconvenient timing: almost an exact week before our first seminar. As an Art History student (a faculty whose classes often have small capacities), I was put in an uncomfortable position trying to reconsider my course progression and join long waitlists for other classes. Luckily, after emailing the Head of School, the class capacity of one particular course seemed to extend by 6 students.”

Professor Scheer’s email provided a list of some alternative courses, however, all but one provided are at full capacity and with waiting lists.

In the email Scheer assured that “no student progressions will be impacted” and that “For Art Theory students for whom DART2310 Aboriginal Art Now is a core course, course substitution requests will be considered on a case-by-case basis”, providing a web form.

However, none of these “substitutes” offer instruction of Aboriginal art. Rather, they are courses based on western knowledge and are not viable ‘substitutes’ for Indigenous art knowledge.

Nico continued, “I feel as though I have been continuously deprived of an integral, highly educational and outstanding course. UNSW Art and Design seem to have been searching for a First Nations academic since they fired Tess in 2019 to no avail, which makes me feel as though I might miss out on this pivotal course entirely.”

Angelique Ford, a current UNSW Fine Art Undergraduate voiced the extent to which these alternatives fail students, “For the class of 2021 art theory students, for whom this is a core course, the repeated cancellation of Right Here Right Now last year when it was meant to be taken (as an intended second-year course), and again this term, means that many students will be graduating without having the chance to take this course at all. The cancellation of this course leaves a significant gap in our education.”

O’Shea substantiates the value of the course, “it taught me more about Indigenous art and history than anything I’d done previously in my BFA at another institution.”

Tharunka also reached out to Professor Scheer for answers regarding the future of Indigenous art studies at the School of Art and Design (Appendix B). He mentioned that the cancellation was, “disappointing,” and responded by re-sending his email to students enrolled in DART2310.

Tess’s course regularly brought in guest lecturers such as internationally renowned First-Nation contemporary artists such as Vernon-Ah Kee, Richard Bell, Tony Albert, Dianne Jones, Nici Cumpston and international First Nations artist Adrian Stimson, from the Sisika Nation in Canada. All of whom are included in the large group of creative practitioners who have boycotted UNSW Art and Design and Galleries, in response to her dismissal.

Despite taking the course over eight years ago, O’Shea contests “I strongly doubt I would’ve gained the knowledge I have in the history and contemporary context of Aboriginal art and culture without it. It helped me understand ethical considerations, improved my critical thinking and promoted my advocacy as an ally.”

#StandWithTess, a student-run group emerged in light of Tess’s dismissal in 2019 and were evaded by UNSW in their venture for the truth of her dismissal. On the 8th of September, the group responded to the cancellation. They made it clear that Tess is someone who “taught this course with passion and pride but each and every semester she updated the course to make it actually relevant to the HERE AND NOW.”

With more than 600 followers and hundreds more off social media, many are backing the return of Tess, who worked for UNSW from 2006 until 2019.

The group’s post highlighted Scheer’s reprehensive use of the possessive “our” when referring to “our Indigenous staff and community”.

They also questioned the existence of “the mysterious casual staff member”, in light of the fact that the course has been cancelled three times in the past two years due to “unforeseen circumstances”.

Tess was pivotal to Indigenous Programs in its entirety and the forced vacancy of her position has left a tangible absence in Fine Arts. Since Tess’s dismissal, UNSW Art and Design has irresponsibly forced hundreds of Bachelor of Fine Art Students to graduate as creative practitioners without any formal training in Indigenous knowledge in their field.

Vic Chapman, a member of the Order of Australia and beloved former Elder in residence at UNSW Art and Design by invitation of Tess Allas, renounced UNSW and left his position on grounds of mistreatment in 2020. He called the current UNSW climate and management of Tess’s case as one where “Aboriginal people are treated with disdain, lied about, lied to and used only for convenience and virtue signaling”.

We hope that UNSW Art and Design School apologises to the UNSW community, particularly Tess Allas.

Ava is a second-year student and member of #StandWithTess. She has been involved in advocating for the return of Tess Allas since 2020.

Share
Previous The cheapest UNSW accommodation that you probably haven’t heard about
Next Living in Shanghai’s Jewish Ghetto: the story of a Holocaust survivor