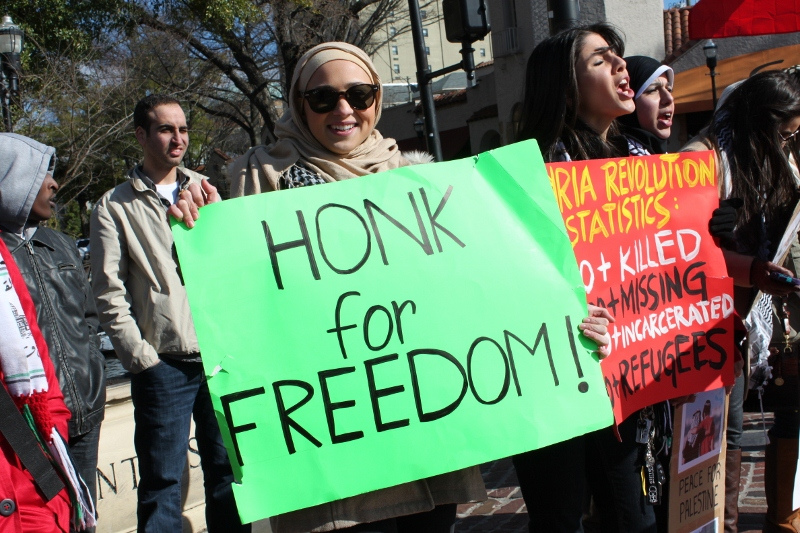 Opinion: The Trouble With Syria

The Syrian Conflict raises some important issues, some would say contradictions, in how the West conceptualises democratic transition.

The Assad regime has committed to holding a referendum on Article 8 of the Syrian Constitution in two weeks. The article has heretofore prevented any genuine democratic dialogue, with Assad’s secular socialist Ba’ath party, representing an Alawate minority, defined as the “leading party in the society and the state”. It is thus assured a permanent majority in parliament.

Assad’s populist concessions, which in 2006 would have been considered unthinkable, should signal an end to the hostilities that have raged since 2011 in the name of peaceful democratic transition. The US however remains unconvinced, flatly rejecting the proposal, just as it rejected the Arab League proposal that the rebels hold peace talks with the Assad regime. And perhaps with good reason: according to a recent opinion poll conducted by Qatar’s Doha Debates institute, fifty-five per cent of Syrians said they do not want Assad to resign. This is not to suggest that they support him, nor that the waves of protest against Assad are unfounded—they undoubtedly reveal a de facto crisis of legitimacy. Nonetheless, the majority of publics believe that Syria is better off with Assad at the reins even with Article 8 preserved than with a transitional government beleaguered by subversive elements.

That Assad’s resignation would invite greater instability is a difficult perception to counter as it has been the consequence of every ‘successful’ Arab Spring uprising to date. Libyan paramilitants refuse, according to U.N. High Commissioner for Human Rights Navi Pillay , now operate with complete impunity, committing “torture, extrajudicial executions, rape of both men and women”.

The Syrian public, anticipating these eventualities, continue to support Assad not because they believe him to be a steadfast advocate of liberal democratic values, far from it—they see him as a repressive and brutal autocrat with a highly sophisticated military-intelligence apparatus. But this is precisely why Assad has the support of his people—his authoritarian system has served as an effective bulwark against the Muslim Brotherhood and Salafis, as well as other radical terrorist groups exiled by the Assad regime and expressly outlawed from participating in Syria’s secular democratic system.

What is termed the ‘Syrian Uprising’ by the media is in large part the systematic weakening of the Assad regime by these same rogue elements which it was once able to keep at bay. Many of these groups are foreign terrorist factions, such as Al Qaeda Iraq, a Sunni fundamentalist organisation bitterly opposed to Assad, a Shia, and his secular regime. US officials have even acknowledged that the Aleppo attacks of February 10 which killed 28 civilians were the work of a well-organised, trans-national jihaad by the Al Qaeda. Nonetheless, the liberal media have until recently grouped these jihadists with the Syrian rebels by the liberal media to give the impression of homogeneity in opposition.

More disturbing still are reports of direct US involvement in the conflict. Ex-CIA official Philip Giraldi, Ph.D, claims NATO are “delivering weapons from the late Muammar Gaddafi’s arsenals as well as volunteers from the Libyan Transitional National Council who are experienced in pitting local volunteers against trained soldiers”. Retired US Army Gen. Wesley Clark, the architect behind the 1999 Serbian bombings, has put forward similar theories, alluding to a NATO-led effort to destabilise Syria.

Whether these theories are accurate or not is largely unimportant. What is crucial to understand is that Assad supporters see the US not as a saviour but as another threat to regional stability, with their lofty UN rhetoric belying their true strategic interests. And who can blame them? In 2006 the US tried to justify a military invasion of Syria by arguing that the failure to discover WMD in Iraq was due to Assad concealing the warheads for his ally.

One can appreciate the dissatisfaction felt by the Syrians people, whose individual liberties are constantly undermined by an authoritarian regime, especially given it’s rampant inflation and youth unemployment. Surely these people are justified in their protests against Assad. However, it is equally important to appreciate the issue holistically, to learn the lessons of Egypt and Libya: the Conflict will not end, but escalate into NATO-armed anarchy, if a regime change occurs. As Assad has said, “when we analyze this war in a materialistic way and ask when is it going to end and who will be the winner and the loser, it means that we do not see the endgame.”

Previous Far Right Wants International Students Out
Next If I Ruled The World: John Kaye