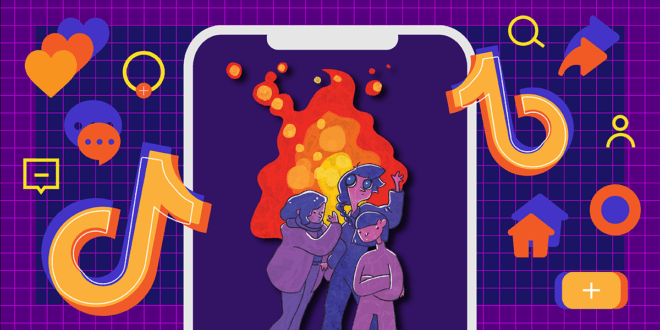 Between Virginia Woolf’s life writings and relatable TikTok videos, George ruminates on how social media posts can procure from our minds certain memories which would otherwise remain forgotten.

Memories are a strange thing to hold on to. They are impossible to recall in moments of need, yet unexpectedly float into ordinary moments of the day. Recently, I wasn’t able to tell a friend why the scratchy strings of a song playing on the radio sounded so familiar. But on my routine walk to the bus stop, the earthy smell of figs reminded me of the dry hills my grandparents grew up around. You see, memories can be unreliable.

In her essay titled ‘A Sketch of the Past,’ Virginia Woolf conceives of life as a bowl that one fills and fills until it is brimming with memories.1 Within this soupy mess, Woolf draws a distinction between moments of being and non-being. Moments of being are exceptional. They stand out in our minds because of the blunt force with which they hit us. Woolf eloquently describes the “sudden violent shock”2 she feels in her adulthood at the sight of an apple tree, because it reminds her that a friend of her parents had killed himself on a holiday in St Ives. There was a sudden darkness she felt, even as a child, after hearing of a life cut short at the stump.

But the moments of non-being are the tiny fragments of memories I speak of when I talk about unreliable memories. In Woolf’s view, these are the insignificant moments that are difficult to remember, since they are the ‘cotton wool’ we stuff our days with. She writes how “week after week passed at St Ives and nothing made any dint upon” her memory.3

I experienced much the same the other week as I aimlessly scrolled a niche corner of the internet. There were people my age, mostly white, with thick British accents, standing before a green screen in old-fashioned clothes. They were clearly impersonating primary school teachers. One of them pretended to knock on the door of a pixelated image of a classroom and called on a student to pack up their things and meet them outside. Another blew a whistle tied to a lanyard and began counting out imaginary groups of children sitting cross-legged on the AstroTurf below them.

Unexpectedly, I had the faintest glimpse of a memory. I had been called out of class to see my younger sister, teary-eyed, red-faced, and snotty. She had grazed her knee in the playground. I remember staring at the tiny ink blotch on my kindergarten teacher’s ankle as the story she read to us trailed over my head. I concentrated until the ink blotch made out the shape of a bumble bee. The slow rush of memories, or, in Woolf’s terms, moments of non-being, had been buried under the cotton wool that made up my days as a child.

And I wasn’t the only one who felt this way. In the comments section of one of the posts, ‘@mxria.vu’ wrote ‘WHY U SO ACCURATE ITS SCARY’. Hundreds of people were tagging who I assumed to be their primary school friends. I suddenly felt a strange sense of familiarity with these people who, despite living continents away, shared the exact same experience as I did. I felt the same immediate impulse to share these videos with friends. And I did. I shared them all. Because in the brief moment spent watching the videos, I became the child that the teacher called to meet them outside the classroom. I became the child sitting cross-legged near the teacher. My mind vividly recalled moments I had not previously thought about in years.

According to Woolf, these moments of non-being are not completely erased from memory but are difficult to recall. Her life writing reveals her dexterous ability to plunge deep into the bowl of her own thoughts and find them. There is the image of her mother in a dressing gown on the balcony of their home in Kensington, or the purple of passion fruits flowering on the walls of their home.4 At least for me, it was the intense familiarity of these videos which fished out fragments of thought I had not recalled in years. They were moment of non-being I otherwise may have never recalled again.

1 Virginia Woolf, “A Sketch of the Past” in Moments of Being: Unpublished Autobiographical Writings, ed. Jeanne Schulkind (Sussex: The University Press, 1976) 64.