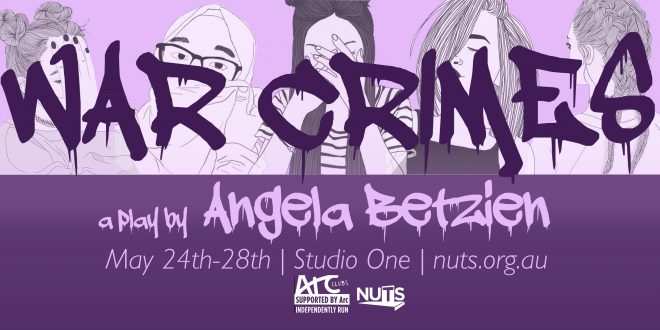 This piece mentions rape, homophobia, islamaphobia and sexual assault, and may cause distress for some readers. If you would like to report any possible breaches of the Student Code of Conduct, including sexism, students are directed to the Student Integrity Unit for support. https://student.unsw.edu.au/complaints

One morning Jade wakes bruised and bleeding on the beach. She thinks she’s alone, that no one will know, but someone was watching from the cave above the cliffs. Set in a forgotten coastal town, War Crimes tells the gripping story of five teenage girls who have fallen through the gaping cracks of society, fighting to earn their respect and leave their mark by whatever means possible.

Rosie is a veteran of NUTs and brings her experience to her directorial debut. In the process of looking for a production that contains female leads, while also being about women, her assistant producer suggested she try War Crimes. She immediately fell in love with the poetic language and strong themes. She intends to tell stories of womanhood– not glorified, and not glamorous, just the real and confronting experiences that women face.

Rosie wants this production to open dialogue about how we relate to minority groups within our society, by casting performers who can relate to what the characters are going through. The stripped back and minimal staging allows for a strong focus on character development, so as to create an intense performance, in which there is a shift from dialogue to real and sympathetic conversations between actors and the audience.

A NUTs veteran, Courtney enjoys the rush of performing in front of an audience and bringing a character to life. Portraying Jade in War Crimes, she hopes to connect the issues her character faces to a wider context, presenting sensitive issues in a realistic and relatable way.

Jade, originally from a rural coastal town, is pressured into keeping up with her high school Regina George façade after being gang raped. Having to deal with friends and the expectations that come with popularity begin to take their toll, as she struggles to sweep her sexual assault under the rug. She increasingly feels isolated and begins to connect with the outsiders at her school, including Jordan.

Courtney wants to shock the audience with a blatant portrayal of sexual assault and the associated stigma victim’s experience. The play implies that this is as a result of society’s tendency to victim blame and silence survivors. She hopes to give a voice to these experiences, purposely making the audience confront uncomfortable feelings and seek to change socialised behaviours that ignore the issue.

Since joining NUTs at beginning of the month, Naks’ passion for acting has been fulfilled. While she finds the mental preparation for stage roles the most challenging, she feels that she is most at home on stage, as she is able to channel another character and convey a message to the audience.

Naks will be portraying Ishtar, who is an Islamic refugee to Australia. She identifies with Australia, despite not being accepted and facing racism at her public high school. Described by Naks as the “most powerful character in the play”, Ishtar has a lot to say, and isn’t afraid to speak her mind when confronted. Pushed to the side by the other characters, Ishtar knows what is right and follows her truth.

Ishtar represents the marginalisation of racial minorities in society today, where strong and proud individuals are made to feel unworthy and silenced. As someone who is proud of her own cultural and personal identity, Naks wants to convey the discrimination faced by others, especially women of colour. She hopes that her powerful representation of Ishtar will challenge audiences to understand the struggles of refugees in modern context.

Originally encouraged to join NUTs by her high school drama teacher, Nicole is flexing her acting chops portraying Jordan. She enjoys channeling other characters, taking audiences on a shared journey and creating a new world in the process.

Jordan is forced to confront her identity at every turn, as she deals with her mother abandoning her and being homeless, after escaping her foster family. She also struggles with her own personal identity, as she attempts to define her sexuality. As a victim of homophobia and rejection from her family and her peers, she seeks to find her true self  in a life turned upside down.

Nicole wants the audience to connect and empathise with the animalistic Jordan, who is easy to fall in love with, despite being easily enraged. As someone who would fall between the cracks in the fast pace of modern Australia, Jordan represents the undercurrent of rejection and homophobia in our society, forcing us to start an overdue dialogue on whether we are as progressive and accepting as we see ourselves.

Share
Previous How will the 2016 Federal Budget affect women?
Next A Guide to the Dark Side