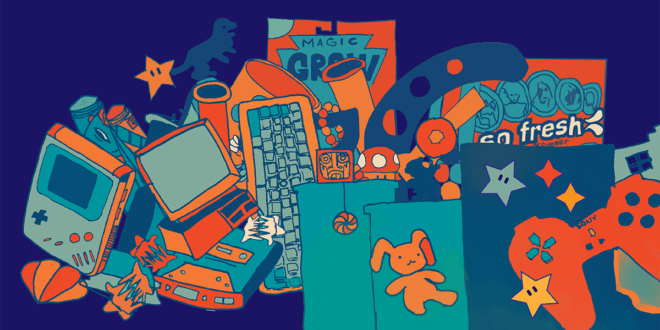 Analysing how nostalgia plays into how we establish and maintain connections with the spaces that we occupy.

Let me set the scene for you. It is Wednesday morning, and I am sitting at my desk. I’m scrolling through Reddit on my laptop when I see a subreddit pop up. It’s called r/nostalgia. It seems to contain a treasure trove of pre-Y2K pop culture. As I scroll through this subreddit, there are references that I am vaguely aware of, some that are completely lost to me, but none that give me that visceral jolt of “oh yeah, that was the best! I miss that…”

For some people, nostalgia helps them to remember that good times will always exist despite the bad times.  Mere association can trigger nostalgia. The first four notes of a song, the hint of an aroma lingering in the air, or the silhouette of the person.

Despite the strength of some sensory stimuli, with smell being the strongest sense, memory itself is a very finicky thing. I remember when I was taking a psychology course during my undergraduate degree and one of the topics revolved around memory. The lecturer explained that memory is not as accurate as we often believe it to be. Our memories can indeed fail us. The same foods we begged for in our childhood and devoured like they were ambrosia, sometimes taste lacklustre in adulthood. Although this could also be because the taste experiences of adults literally differ from when we are children.

Then again, my sources of nostalgia are different. I remember watching The Simpsons every night at six p.m. on Channel Ten. No one in my family was allowed to focus on anything other than the episode we were watching. It was essentially the closest we got to family bonding time. But as my siblings and I got older, The Simpsons stopped playing. Our nightly routine became a distant memory. I would love to go back to that time and relive it, but time stops for no one. Change is an inevitable part of life, and we are living in a time when change is a constant.

An article that Ben Rowen wrote for the Atlantic in 2017 delved into the progression of technology and how it has made nostalgia readily available at our fingertips. The article chronologises the introduction of photography up to VR technology, and their ability to recreate scenery from our memories. We may not be living in an episode of Black Mirror yet, but the technology available is enough to let us relive just about anything.

But what exactly do we gain from nostalgia?

A study by Taylor FioRito and Clay Routledge for Frontiers in Psychology found that nostalgia is predicated on positive emotional experiences and typically triggered by the desire to be closer to others. Most nostalgic experiences involve an experience with other people, usually prompted by the words, “remember the time…?” And even if the source of nostalgia is a moment in time where you were alone, discussing those experiences may lead to the discovery that others have similar experiences to yourself. It gives us comfort knowing that we are not the only ones who have felt like this. That theory does hold weight; I cannot give you an example of nostalgia that does not involve at least one other person.

But nostalgia also has its downsides. In some instances, people become so obsessed with reliving the good times that nothing can motivate them to move on with their lives. This type of person will usually speak of the “good old days”.  Most of the time, people fall into the trap of nostalgia claiming that the blissful ignorance they grew up with made the challenges of adulthood far too difficult to contend with. This leads to them clinging to the things that give them that hit of nostalgia constantly, at the detriment of the rest of their life.

For some people there is nothing to be nostalgic about. Sometimes, bad days pile on top of each other. There may be the possibility of nostalgia for a future version of themselves, but not everyone will reach that stage.

We are wired to search for things that will give us comfort. Now more than ever, humanity is looking back on the past with a mix of fondness and envy. It has led to the creation of ‘past self’ and ‘present self’, separated in a similar manner to ‘Before Common Era’ and ‘Common Era’.

Our past selves have the privilege of ignorance that our present selves are desperately longing for.

But our present selves can learn a lesson, can’t they?

It is difficult to settle on what kind of outlook you should adopt to move past nostalgia. Pessimistic attitudes like nihilism and fatalism make you seem too much like a jaded cynic, and optimistic attitudes such as romanticism and idealism reek of naïveté. Nostalgia will always be part of the human condition. Like anything else in life, it should be part of your life in moderation.

My own exploration of r/nostalgia ended in about five minutes; nothing on the subreddit gave me real reason to stay. But that was only because the posts referenced things that would give Americans a specific type of cultural nostalgia. I found out that there is a similar subreddit, r/AustralianNostagia – where at least 40 per cent of the posts made me pause and think back.

Then again, it is a Wednesday in 2021. I am far too busy and anxious to be nostalgic.

Share
Previous ON MEMORY
Next The return of the dancefloor: Taylor’s Version