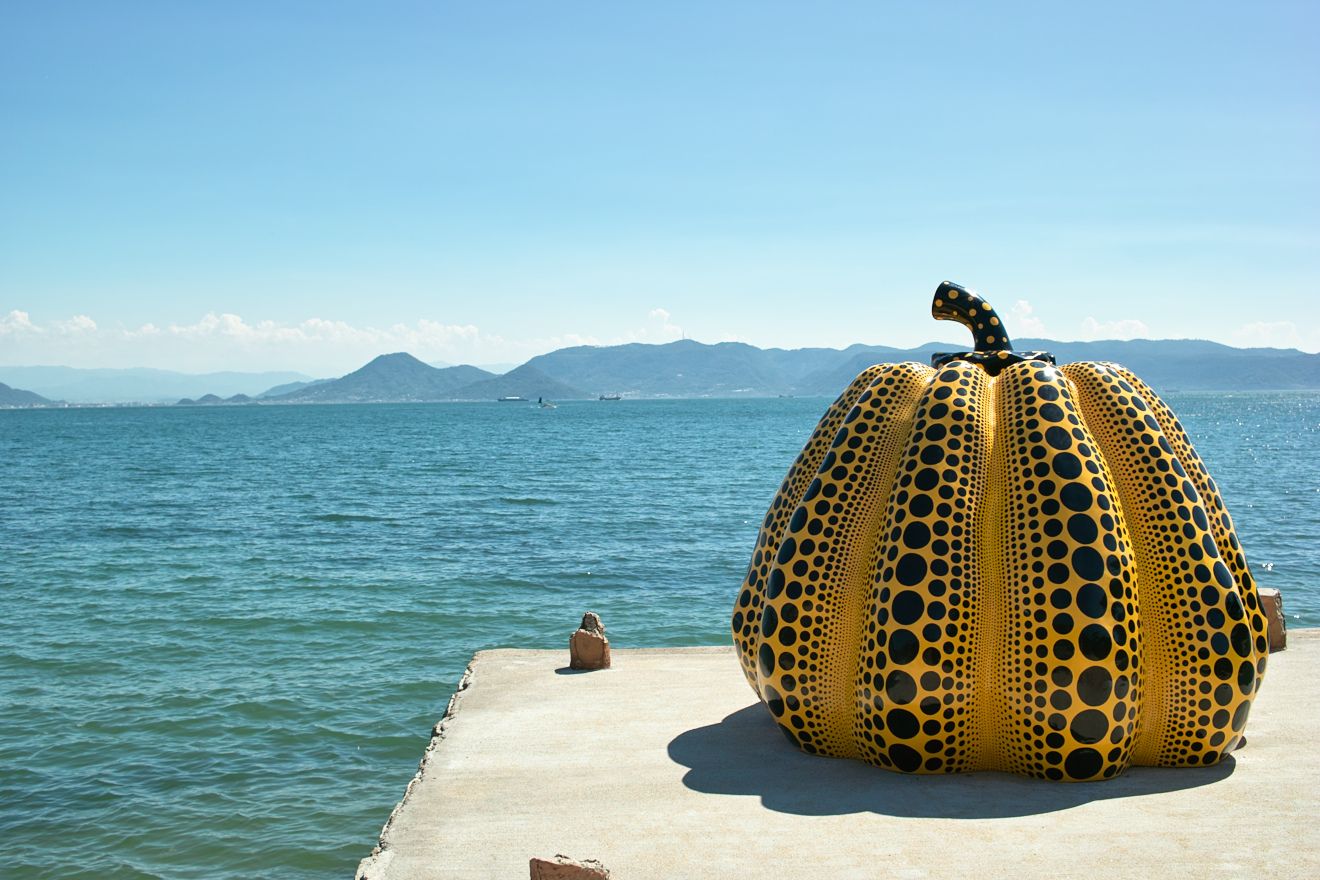 Naoshima: A Japanese Art Island Offering A Glimpse Into The World

The Japanese island of Naoshima is peculiar. It’s an art island, better known to tourists than it is to locals. Capturing the imaginations of our small group of artists and art students, the island was an essential detour on our exploration of Japan. And we were not disappointed.

We could sense the creative pulse even as awaited the ferry to Naoshima – a looming sea-themed sculpture greeted commuters, colourful fish occupied the foreshore, the ferry was spotted with large, red dots. Our first sight of the island was an enormous bulbous form, glowing with the sunlight (we later learnt it was a “simple” bike shed).

Eager to explore, we quickly acquired bicycles (popular among tourists and locals alike), and after a short interlude (in which we had to teach one member of our group how to actually ride a bike), we began our journey. At first, the ride took us through narrow streets dotted with small wooden houses, some of which appeared burnt. We passed one of the many “Art Houses” – unoccupied houses that artists had converted into stand-alone works of art.

As we moved further afield, the roads opened up to reveal ocean views, bright and calm in the cold morning air. We encountered almost no one, only wintry trees and hidden shrines.

Quite suddenly, we came upon Yayoi Kusama’s Pumpkin, an artwork that, had it been in Sydney or Tokyo, would have been swarming with tourists. But here, on a secluded beach, it rested unobtrusively on a jetty leading out to the sea. Bright yellow, and spotted black, it looked both jarring in the natural landscape, and completely at home.

Soon, looking at the work was not enough: we raced across the jetty, dodging breaking waves, and experienced the slightest of touches – smooth, cool – before sprinting back, shoes soggy and socks drenched, beaming.

As we continued our ride through sculpture gardens, pedalling up increasingly steep hills, we came upon the looming Lee Ufan Museum. Descending heavy concrete stairs, we were confronted by what would be a recurring motif in Tadao Ando’s architecture – rock. To reach the entrance, we walked through a courtyard scattered with small grey pebbles. Then: a larger boulder, a towering obelisk of stone, and a resting metal sheet.

Further along, soaring concrete walls led us away from the trees and the beach, and into a minimalist’s paradise. My personal highlight was a sculpture of an inquisitive boulder staring at a tilted piece of dark metal, quiet and contemplative.

A short ride later was the Chichu Art Museum. Again, this complex was dominated by powerful concrete walls, which lead us, maze-like, through the gallery’s many levels. The first work we encountered was James Turrell’s Open Sky – a concrete room with a window framing the air above. There were no crowds, so we sat meditatively, staring upwards as clouds crossed.

Standing in stark contrast to their harsh stone home, we also discovered pieces taken from Monet’s Waterlily series. The large Impressionist paintings truly brought home the rich and diverse connection Naoshima has with the history and diversity of art.

As we were cycled slower than we had hoped, and a number of the galleries were closed for winter, we took shelter in a beautiful little café overlooking the port. Even Café Konichiwa showcased art. A stack of sketchbooks, some used, some new, lay ready to be perused or drawn in.

We sat, cupping hot drinks, marvelling at the infinite world of art created on this tiny island, filled with promise.