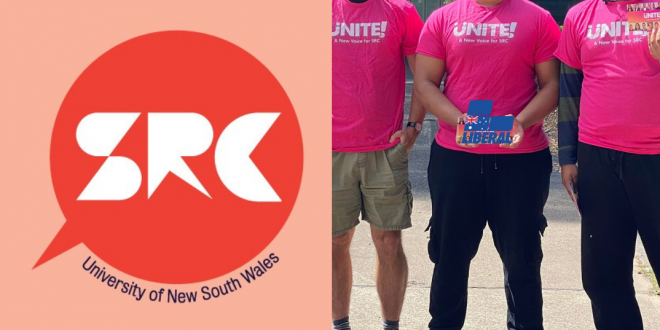 The two anonymous sources have claimed the Unite ticket was led in part by Damien Pace and Sam Jacobs, who are affiliated with and/or employed by various right-wing groups. Pace is not a UNSW student; and neither’s names have been seen on any of the ticket’s campaign material.

If the claims are true, the involvement of the two individuals would have likely resulted in the disqualification of some or all of Unite’s candidates, or deduction of the ticket’s primary votes, had it remained in contention for election.

If Pace’s involvement in this year’s SRC Elections were confirmed, it would result in a breach of Arc Regulation 11.24 (a) iii. as part of the ‘closed campus’ rule.

The rule states that ‘Only UNSW students may campaign for election of a candidate or ticket in Arc elections. All students involved in campaigning must comply with Arc’s Code of Conduct and UNSW’s Student Code Policy.’

An anonymous whistleblower contacted Tharunka last week, claiming to have spoken about the recently folded Unite ticket with Sam Jacobs, who allegedly stated that he was ‘behind the entire thing’.

He added that when the ticket was withdrawn, for the aforementioned reasons most of Unite’s candidates were ‘not interested’ in running as independents.

When the whistleblower asked about Pace, Jacobs allegedly replied, ‘oh, Damien and I are best mates’.

Jacobs is a prominent member of the UNSW Conservatives society, and a former employee of Liberal Senator Jim Molan.

Pace is the former president of the Macquarie University Liberal Club. In 2016 he shared a series of controversial opinions on that year’s US Presidential Election in Grapeshot, Tharunka’s cousin publication at Macquarie. In 2021 he appeared in a viral video by Friendlyjordies, physically blocking the youtuber’s producer’s access to John Barilaro at a public event hosted by the former State MP.

Returning Officer Phil Binns was not made fully aware of the two’s involvement in the elections. The Returning Officer is in charge of conducting and overseeing UNSW elections and is responsible for reviewing and validating candidacy, resolving disputes and complaints raised against candidates and campaigners, and approving election-related content produced by UNSW’s publications.

Binns told Tharunka that he was first notified of the potential breach of regulations by two sources on the 28th and 29th of September respectively. He emailed Unite’s NUS Candidate Omkar Thite seeking clarification around 2pm of the 29th.

He told Thite, and later Tharunka, that if there was a breach of the closed campus rule , the resulting action would consist of ‘more than a warning’. However, he was not initially ‘provided with the required level of proof’, after having ‘asked for further evidence’. Unite’s candidates began to withdraw on Saturday October 1.

The same person who spoke to Jacobs last week alleged that Jacobs told them that ‘two people’ made the decision to withdraw, and that it ‘sucked for the people who wanted to run properly’.

“He (Jacobs) said that Vihan couldn’t take the stress of the increasingly political stupol scene and withdrew the ticket almost completely by himself,” the whistleblower told us.

The first public claims of Pace’s involvement with Unite came from the Left Action ticket on October 3rd. Education Officer-Elect Cherish Kuehlmann told Tharunka that Left Action was approached anonymously by a former Unite campaigner who informed them that Pace ‘had a role in managing’ the campaign.

“We have also seen him on campus talking to Unite campaigners and handling their campaign material [on] Tuesday (September 27).” Kuehlmann told us.

Tharunka reached out to most of the people that ran for election under the Unite ticket. Few responded to our requests for comment, and almost none that did wished to speak on the record. A few of those who we did speak to said that they had no interest in holding office in the SRC, and took part in the election campaign as a friendly favour at Roy’s request.

“I chose to run with Unite mainly because I am good friends with Vihan.” Paddington Representative-Elect Daniel Mulia told us, saying that he was approached by Roy as campaigning began in the first week of holidays.

Tharunka reached out to Mulia as part of its general coverage of election candidates. He initially submitted his candidacy under Unite but left the ticket early in the campaign and instead ran as an independent, before declaring his political allegiance with the Grassroots ticket. When asked why he left the Unite ticket, Mulia said:

“They haven’t read the charter. I asked during a meeting, ‘who here has read it?’ but it seems like not many people even know where to find the charter or have been informed in an official manner by the leadership team about it.”

“I’m just afraid if history repeats itself and it’s another Spice Up, and a lot of members drop out, then what’s the point of running when your other ticket members are just going to drop out because they don’t understand what they were going to be doing in the first place?” Mulia continued. Roy was elected into the position of Education Officer last year under the Spice Up ticket.

Under Arc regulations, it is illegal to publish campaign material that:

The combination of accusations that the ticket’s candidates would not commit to their duties if elected, with the absence of any declaration of Pace’s and Jacobs’ involvement in campaign material despite their heavy political affiliations, begs the question of the true political motives of the Unite ticket, and suggests that their campaign material was misleading and deceptive.

The Returning Officer confirmed with Tharunka that he was not aware of Jacobs’ involvement in the ticket.

We asked Mulia what he knew about the people who were managing the campaign.

“I wouldn’t know because I’m not too involved with the leadership team,” he said.

The only former Unite candidate who clarified their political affiliations, if any, was Grisha Chawla, up for Ethno-Cultural Officer, who is a member of the Greens. We asked her if she knew of the involvement of conservative-aligned managers in her ticket and received no response.

Tharunka has made several attempts to contact Vihan Roy, Damien Pace and Sam Jacobs to confirm their relationships with each other and the ticket. We also asked if the three were aware that Pace’s and Jacobs’ involvement was unlawful per Arc regulations. We did not receive a response from any of them. The extent to which Pace and Jacobs were involved with Unite remains unclear.