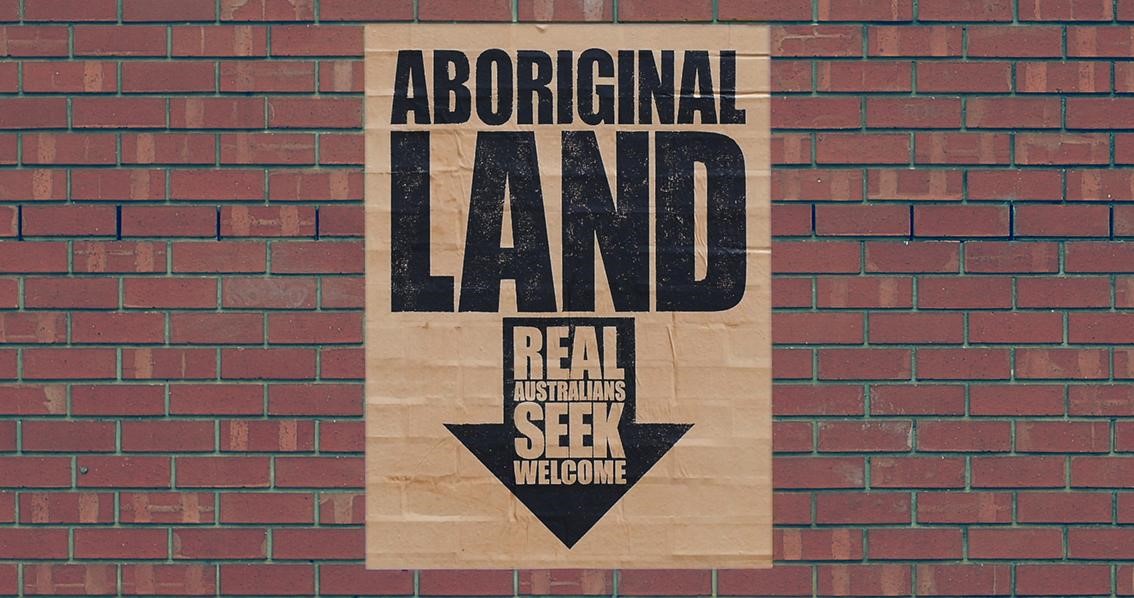 Drew is currently plastering his posters across Australia and hopes they will also reach remote Aboriginal communities. His previous posters have addressed questions of Australian identity and its conundrums, and have received criticism from both the left and right sides of politics. It’s for these reasons that Drew’s work is intriguing; he combines street art with a political message, despite the artist himself stating that he has “always disliked political art”.

“Real Australians Seek Welcome” is the flip poster to Drew’s first work “Real Australians Say Welcome”. The first series was created as a response to Australia’s treatment of asylum seekers and the “Stop the Boats” election slogan propelled by Tony Abbott in the 2013 election. Posters were placed in all Australian capital cities and Drew even ended up meeting with politicians and activists across Australia in response to the work.

The second series was the “Aussie” posters, depicting early Australians of different ethnicities with the word “Aussie” written below. The most prominent poster was a 1916 photograph of Punjab hawker, Monga Khan, who applied for exemption to the White Australia policy. These posters address the question of Australian identity and the roots of multiculturalism in this country.

“We need myths. As long as they are known to be myths, it’s an important tool of identity,” Drew said.

“Why can’t we have an Aussie folk hero who fulfils a new role or a role which is different?

Peter Drew’s work does carry an important message about the continually evolving Australian identity and its myths. All three iterations of his posters have addressed the complexities of identity and multiculturalism. The “Real Australians Seek Welcome” poster infers that Australia’s multiculturalism existed before colonialism, with the represented 250 distinct Indigenous language groups, each with their own customs and culture. Most importantly, “Real Australians Seek Welcome” has a crucial meaning about acknowledgement of Indigenous lands.

“60,000 years of cultural survival carries an important lesson in that it shows us that our sense of belonging to this land needs to be earned and continually renewed by everyone, whether you were born here or not,” Drew said.

Thus, the posters reflect a “cycle of belonging” where Australians must simultaneously “say” and “seek” welcome.

Drew himself has stated that he wants his work to speak to the “silent majority in the middle” who have become drowned out by the noise made by the far left and far right. These aims are not without their own controversies. Although Drew has stated he is “apolitical”, it is impossible to accept this; his works carry political messages and creating street art is undeniably a political act itself.

There have been several prominent cases of Drew’s posters being vandalised. In Darwin, the word “Aussie” on Drew’s “Aussie” poster was ripped off, replaced with the words “Muslim Terrorist” written in black marker. In Auburn, in Sydney’s west, similar incidences occurred. In another case, a poster of child sex offender Rolf Harris and terrorist Jihadi Jake were created and placed beside Drew’s “Aussie” poster of Monga Khan. In response to the latter incident, Drew stated that, unlike the previous anti-immigration and discriminatory protests of vandals, the vandal may have been attacking aspects of “nationalism” evident in the posters, highlighting that not all Australians are heroes and instead, have committed many wrongs.

“This myth is one of an Australianess that is redeemable, an Australianess that deftly sidesteps nationalism’s ugly past in this country. Rather than countering white denial, it is instead its own kind, where racist legacies are swept under the rug by projections of acceptance back into the past.”

Drew has responded to these critiques by stating that his work focuses on celebrating diversity and provoking discussion among Australians, who are initially reluctant to discuss identity and culture.

These critiques are relevant, but we should also question if a single poster could (or should) be burdened with the obligation to express all the complexities of the Australian identity and history.

Is Australian multiculturalism inherently connected to nationalism? Peter Drew’s work does strike a chord with the everyday Australian and the fact that his work is “out in the streets” makes his message even more accessible. Overall, it is important for people to discuss whether an “Australian identity” exists, acknowledge that we live on Indigenous land, and understand that to be a truly multicultural nation we need to “say welcome”.

Correction: In the print edition of Issue 2, CULTURE, Olivia’s surname is incorrectly listed as “Okine.” Olivia’s correct surname is as it appears on this online version.

Previous A Recipe For A Killer Night: Reviewing Word Travels’ Multilingual Poetry Slam
Next Naoshima: A Japanese Art Island Offering A Glimpse Into The World