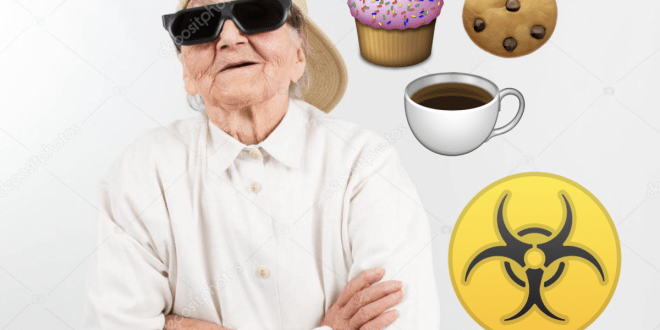 Mrs Maurine lived on Old Bakerdean,
And was known for her cupcakes, lemon, and tea.
She cooked night and day at her storefront canteen,
And charged a slight fee.
Her story is truly obscene.

Called “Killer Kreations”
Known for thriller sensations!
In colour and flavour
They’ll make you salivate and savour
Every bite, taste and smell.
But there’s much more to tell…

See, she was cunning, conniving, one might say plain evil.
Her methods were almost medieval.
Her pies stuffed with crows,
Tea filled with snot of bull’s nose.
Her cupcakes mistrusting,
The cookies disgusting!

She did not care for health,
Old Mrs. Maurine cared only for her personal wealth.
She was rolling in cash; it was left, right, and centre.
But that would all change with one TV presenter.
His name Harry Notch, he was a top bloke,
He was known for daily downing 12 cans of coke.

Now Harry Notch was a brilliant young boy,
But he never intended to crack Mrs Maurine’s plays and ploys.
On January 3rd he knocked on her door,
To say only that his viewers wanted more!
He flirted and flattered, making her flush,
And she beckoned him in while hiding her blush.

They chatted and laughed and drank some hot tea,
As she brought out her cake made of only black-pea.
My new creation! She said,
As she pushed the plate to his nose.
He politely declined then firmly said no,
Which filled Mrs Maurine with such terrible, aching woe.

Mrs. Maurine sat and cried and lamented her schemes,
A tale much more interesting than her hopes and her dreams.
She told him of cakes iced sprinkled with nail clippings,
And chocolate chips made of tree chippings.
The idea was repulsing but he unraveled her plan,
The revenge she sought against one bitter, old man.

It was never intended to be for the town,
Just one boy who’d broken her heart: Eddie McFown.
He was handsome and funny and laughed at her jokes,
Bliss until young Eddie revealed the terrible hoax.
See, their relationship, it had all been a lie,
And so Mrs. Maurine began her quest for revenge – over some silly old guy.

He pulled out her heart and left her shunned,
Their relationship was over before it’d begun.
She was broken for days and lonely for years,
When the idea of vengeance whispered between her ears.
It came in a dream, a deliciously cruel vision,
That would send Eddie quickly to heaven.

So she baked and she toiled and made it taste nice,
The bugs and the snot and even head-lice.
Then she packed up her goods and sent him the gift,
And found that his death was easy and swift.
But not before long others heard of her cake,
And came knocking and asking for something to take.

See others had had the same dispute,
Of a boy or a girl in need of the boot.
So they came under secret and asked in a mumble,
For pastry that would help their partner to take a deathly tumble.
But killing someone, oh, she did not approve,
Merely harming or maiming was more Mrs. Maurine’s groove.

So she baked and she baked and went on with her trade,
And cut her ingredients daily with her long       sharp blade.
She mixed them together to create that great taste,
Her cupcakes and cookies, sweet and two-faced.
Not one thing was cleaned, no ingredient left out,
The horror she caused was beyond reasonable doubt.

So you see, she said, it isn’t a choice,
I am doing good for the scorned and should be rejoiced.
I am helping relationships and fixing disputes,
And help people to pull out their withered dead roots.
I took away the pain and the suffering of relations,
It’s right in the name, after all: “Killer Kreations”.

Maddy is a hopeless twenty-something stumbling through life while simultaneously attempting to study a Bachelor of Arts. Writer and pun enthusiast who lacks budgeting skills but does possess an abundance of sweet dad jokes.

By Sienna Barrientos Beware the Indigo Man!  Phantom of the Coatepeque!  Whose face ripples like …