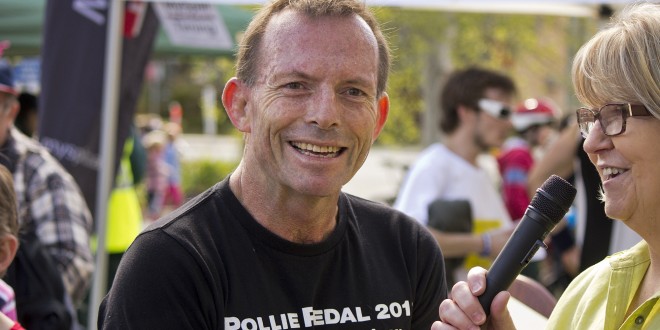 Last night Prime Minister Tony Abbott was announced to be the latest brand Ambassador for Dove Comestics’ ‘Real Beauty’ campaign. The move, not without controversy, was claimed to be, “a progressive step forward for the empowerment of Australian women in 21st century,” according to the cosmetic giant.

The Minister for Women will appear in three short advertisements to be rolled out online and on Australian televisions screens next month. Mr Abbott will feature in his swimming gear at the beach having a conversation about beauty with his family.

“It’s a different sort of approach to the campaign,” advertising manager Sheryl Debil said. “But we think it’s going to have some really exciting outcomes. We’re anticipating a hell of a lot of profit as a result of this strategy.”

Critics of Mr Abbott’s association said that the campaign was patronising, manipulative, duplicitous and hypocritical as Dove participates in an industry that profits from the perpetuation of narrow and destructive concepts of beauty. Mr Abbott responded saying, “I love women and have beautiful wife and daughters.”

“Women all over need to see themselves as beautiful if they are going to make effective contributions to society and the economy. If I know one thing –it’s self-love, and self-loving starts with the loving of the self. If every women believed they had a little bit of sex appeal, we would see some big psychological shifts in this nation.”

Pooch Man, a political science academic at UNSW, was thrilled about the appointment. “I think its great that our Prime Minister has committed to this campaign. Australian women really need a big, strong, powerful man to tell them that beauty is what defines them, and that beauty is empowerment.”

“What is also exciting about this announcement is the Government’s move to be associated with another corporate giant. We’ve seen it rampant in the mining industry, and we’ve had some really positive feedback there, but never before on this scale with cosmetics. This is literally history in the making – an absolute Australian first. And isn’t that something to be proud of?”