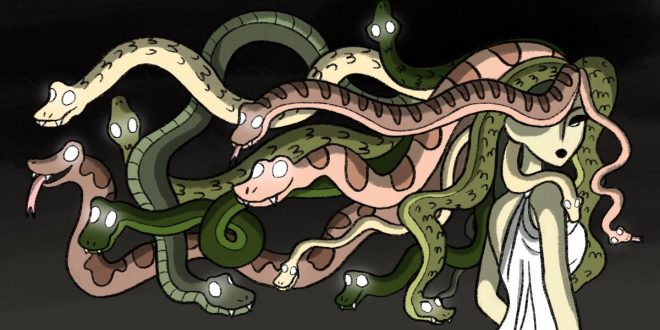 Memes, Misogyny and Medusa (and other Classic Tales of Twitter Trolls)

Mimēma, ‘that which is imitated’.

A Greek word taking on a classic trend of incorporating memorable tales of terror and distraction.

Western culture has a long-standing issue with strong women. Portraying women as strong often results in painting them as the villain to man, such as the iconic Medusa, an antagonist from Greek mythology. This has been seen throughout modern western history, and as the wealth and availability of political imagery have grown, thanks to the likes of Twitter and Instagram, this has only been expedited.

Memes are a symbol of the values of the community they are shared in. The humble UNSW bin chicken holds no significance to those who do not have any knowledge or value in the shared understanding of its origins. Yet for many memes, especially those aimed to be a mockery of those in the public eye, the shared understanding of its origins holds less significance; simply a vague idea of the tone is all that must be communicated. In particular, imagery, allusions and themes are taken from classics and blended into modern-day shitposts, politically persuasive memes and public discourse – most prominently about women and leadership, and the simple dichotomies of good and bad.

The original mythology of Medusa,i an infamous character who has been reimagined in modern interpretations, was a beautiful mortal who served alongside the Goddess of knowledge and wisdom, Athena, and vowed to remain a virgin while serving Athena. However, she had an illicit affair with the god Poseidon and when Athena discovered this, cursed her by taking away her beauty. Her beautiful hair turned to snakes and her face became so ugly that whoever looked at her would turn to stone. Later on, the Greek hero Perseus retrieves her head as a gift for King Polydectes. Perseus beheading Medusaii has become an iconic image from mythology and has since been reimagined throughout modern history as a representation of man’s supposed power over women.

The essay-manifesto Women and Power highlights the connection between classics and modern online commentary. ‘The first recorded example of a man telling a woman to shut up’, Beard explains in the first chapter, ‘is Telemachus telling Penepole in Homer’s Odyssey that her voice is not be heard in public’ connecting this with how women in the public light, especially those prominent on social media, are treated compared to their male counterparts. Her analysis exposes how the mechanisms used to silence women online are inherently a part of western culture and can be traced back to the ideas and themes of the classics.

See the link above for a description of the image.

The use of these characters and ideas to vilify publicly disliked entities, whether that be national enemies or online personalities, has a wrought history in mythology yet continues to be valuable to current social ideas. The example above shows ‘The Contrast’ which immortalises the religious, moral and national prosperity of Britain, shown through the imagery of justice and military and naval power. This is directly contrasted to that of France, which is embodied in a reinterpretation of Medusa, a villainous murderer who is innately associated with national ruin. These themes from the 18th century continue today, highlighting the continuous use of Medusa’s storyline as a tool to create division and public hatred towards the latest public villain.

The 2016 US election saw this exemplified like never before. The political influence of images has always been a contributing factor in who people vote for, yet the culmination of mass-produced political memes, often incorporating classical mythology, increased consumption of media online. The 2016 elections heavily featured mythology and ideas from the classics, such as the recurring image of the two candidates, Donald Trump and Hilary Clinton, portrayed as Perseus and Medusa which lent into the ‘nasty woman’ characterisation of Medusa. These ideas, which thrive on a fast understanding, not a good understanding, and a lack of background information have the potential to undermine the general understanding of the complicated topic. The misuse of age-old stories to do so has also misguided the general understanding of the mythology itself.  Conservative political commentator Joel Pollack, when examining the rise in naked Trump statues throughout the US in 2016 commented ‘No — the reason that no naked Hillary Clinton statues have appeared in public — thankfully! — is simply that anyone who saw them would turn instantly to stone.’ The direct reference to Medusa refers to the evil quality of the mythological figure and highlights the social value of beauty both in antiquity and in contemporary politics.

The process of reimagining classical characters as modern public figures might seem to be an over-exaggeration of a cultural phenomenon, of reading ‘too far’ into memes and political cartoons as an influential way of communicating. However, this modern reinterpretation of mythologies brings ideals and values of an ancient society to our modern society, it devalues women and their power to that of a villainous status. As such, Western societies have successfully vilified powerful women, from the classical Roman mythologies to modern Twitter trolls, consistently silencing women through shame.