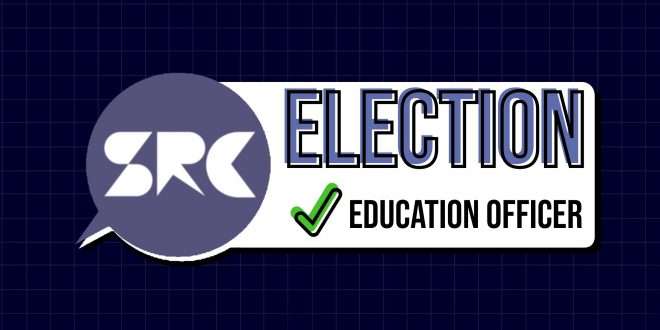 Note: After the writing of this article, Unite! Candidate Vedant Rampal withdrew from candidacy in this year’s election. Cherish Kuehlmann has been elected as Education Officer unopposed.

The role of the SRC Education officer as stated in their mission statement is to provide “a forum for students to fight for change to improve our education system, university, and the local community.”

The candidate running for this position in the upcoming SRC election is Cherish Kuehlmann from Left Action.

When asked how she would implement this strategy, she said, “we have a strategy of doing it that’s totally different to the other tickets. This year we have been running a campaign that’s gotten students involved and some people might say ‘what do protests achieve?’ but I actually think it is really important and one of the only ways students can fight for things.”

When asked how Cherish plans to have such a public campaign and balance working with management, she said, “I think that in the SRC, I don’t want to collaborate with management, I don’t think they have shared interests with students. They run this university like a business…. I think we have got to see that if we are actually going to be able to successfully fight cuts, we have got to understand that students and staff have counterposed interest to management.”

“Students have faced some of the largest attacks on their education at UNSW, but they have been left without a clear lead by their student union. Unite! say they’re a “new voice” for the SRC, but they represent the same conservative strategy the SRC has followed for years,” she said, when asked what differentiates Left action from the other parties.

Cherish explained that her passion for education stems from her political alignment as a socialist. Her experiences as a student of History and Teaching at UNSW have shaped how she views the current student experience. Her passion for helping educators at UNSW comes from how she has seen redundancies affect not just standards of education but the families and communities of those that rely on that income.

She told us, “We live in a very messed up society where everything is run in the interest of profit, and I think that education is no exception to that.

To fight the attack on our education, our SRC needs dedicated activists putting in sustained effort all year round, and only Left Action has a proven track record of doing just that.”

In order to reach out to the incoming generation of students, she said, “I would be having a stall at o-week, try to reach out to students and let them know about what was happening at UNSW … we have a responsibility to fight on our campus to improve our education so getting students involved through stalls, calling around, leafleting, and social media.”

Previous SRC’s Unite ticket appears to have folded – the day before the election
Next VILLAGE GREEN: UNSW’s latest $40m spend is now in use