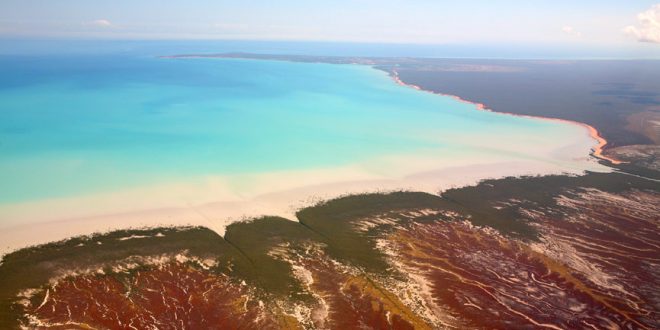 A shower-dwelling gecko, a giant rhinoceros beetle and a fat goanna (or “Barney”) sunning himself by the roadside ­— a few of the first encounters I had on my arrival into the small town of Broome

I had come to Broome to undertake a six-week internship as part of the Aurora Internship Program; a national program aimed at law, anthropology and social science students and graduates, seeking to gain experience working in organisations that support the Indigenous sector. Aurora places interns in the areas of native title, land rights, policy development, advocacy and research in both local and remote areas of Australia. I was fortunate enough to be placed at Nyamba Buru Yawuru (NBY) Broome, the operational arm of the Native Title Prescribed Body Corporate (PBC) that holds native title on behalf of Yawuru native title holders. This remarkable native title agreement saw the Yawuru people become the native title holders of some 530,000 hectares of land in and surrounding Broome, following a Federal Court ruling in April 2006.

My time at NBY coincided with an emerging national discussion around Indigenous land tenure reform and the concept of native title “fungibility”. Unlike other property rights, native title rights and interests are “non-fungible”, meaning that they cannot be sold, transferred or leveraged to generate capital. Here lies the root of our problem: if native title holders are unable to leverage their primary asset, without extinguishing it, to generate their own economic development, how might they otherwise escape the cycle of welfare dependency that entrenches them in impoverishment?

Set against the discouraging and seemingly ideological policy position of the WA Government in regards to this issue, my supervisor Howard and I sought Commonwealth support for land tenure reform on Yawuru native title land. Although our work was heavily research-based, our project also involved regular off-site meetings with WA ministers and officials and on one occasion, the Federal Minister for Indigenous Affairs. I was constantly fascinated by the work I was doing, and I am so grateful for the creative license I was afforded on my internship to test my ideas amongst such knowledgeable and influential people in this field.

The sense of self-empowerment that comes with making one’s own economic decisions, rather than passively responding to externally imposed development agendas, is key to feeling a sense of “Mabu liyan”. A Yawuru term, meaning “to feel good in oneself”; experiencing a sense of who you are as connected to culture, and a greater connectedness to community and country. Looking back, it is this notion that gave purpose to a lot of the work I undertook whilst interning at NBY.

“Mabu” (good) “liyan” (feeling in one’s heart) comes from a sense of being revitalised by culture. During my time at NBY, I was fortunate enough to be welcomed out on-country as a part of a weekly cultural immersion program led by Aunty Di Appleby and the Yawuru country managers. Against the beautiful backdrop of Crab Creek and Roebuck Bay, we spent our time listening to stories, watching the country managers make Boomerangs, and fishing off the beach. The experience of going out on-country and learning from Yawuru people about the importance of keeping traditional knowledge, skill and language alive, was truly priceless. I will never forget the extraordinary stories of the people I met here.

Tea breaks at the NBY office turned into long yarns about weekend adventure plans, the fish catch of the evening prior, or if we were lucky, a nibble on some warm home-made damper. Our friend Johnno even brought his pet olive python (“Oliver”) one afternoon to join in on the action. We were welcomed so warmly into the NBY family with everyone hoping to show us what they loved most about Broome. Along with two other interns, I explored Broome and its surrounds, ventured out on some unforgettable road trips and made a fairly large dent in the town’s ginger beer stocks (a glass of the local Broome brew was the best tonic for that heat!).

One of our greatest adventures was our 4WD trip up to an Aboriginal community called One-Arm Point (also known as Ardyaloon) with our close friend Dwes — a Bardi-Jawi man from Cygnet Bay. We spent our time swimming and fishing in the glassy, bright turquoise waters. Dwes was so proud to show us his country and it was disturbing to recall the fact that this beautiful community had been targeted for closure by the WA Government only months prior. Our road trip finished at Cape Leveque, the northern-most westerly point of Australia, where we marvelled at the striking contrasts between the red pindan rocks, the white sand and the blue water.

Outside of the office, I volunteered at Kimberly Wildlife Rescue helping with emergency wildlife relief and rehabilitation. The wet season’s magnificent lightening storms and bouts of torrential rain meant we were constantly inundated with injured or abandoned baby joeys. I’ll never forget watching the roo’s little heads popping out of their blankets when they heard the kettle starting to boil at feeding time. Here I made friends with a great group of backpackers who introduced me to the vibrant Broome nightlife. I would highly encourage future Aurora interns to ask around to see where else they can volunteer their time in their host community.

For a very small pocket of Australia, Broome had a lot to teach me about accepting difference, embracing change and looking to the future with positivity. The recent appointment of former NBY Chair and Yawuru man Patrick Dodson, as a Labor Senator for Western Australia, is a huge step forward for the Yawuru people of Broome and other Aboriginal people throughout the Kimberley. Mr. Dodson hopes to engage in a “far deeper conversation about the importance and value of Aboriginal and Torres Strait Islander peoples to [Northern] development, and the basic need to address the importance of elevating poverty and disadvantage”.

Share
Previous Free as a Baird
Next The best environmentalists I know are the ones who have over 60,000 years of experience