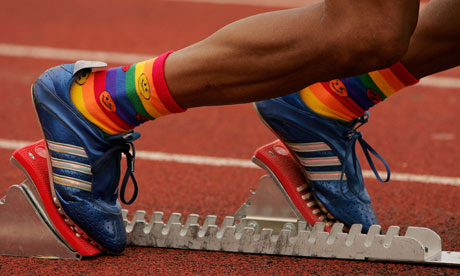 On your mark, get set… and come out Acceptance of homosexuality has increasingly become a norm in modern society. Although challenges are still evident in the LGBT community, societal norms towards individuals identifying as LGBT have transcended due to education and shared acceptance. This is in part due to events in the global community, which have allowed for more common awareness, education and advocating.

So what does LGBT have to do with the sporting world – after all, this is a sports article?  Answer: A LOT!

In fact, you should already know this, unless:

a)      You have been on that long-ass vacation to Fiji most uni students are going to these days, or,

b)      You’ve been living under the same rock as Patrick Starfish.

But if you identified the most with that vacation or as Patrick Starfish, here’s the go.

In recent weeks, two prominent American athletes have come out to the media announcing their true sexual identities. Both examples have caused quite a stir in the media. These athletes are Jason Collins and Michael Sam.

Jason Collins has been a veteran of the NBA and still competitively plays in the high ranks. Having just signed a 10-day contract with the Nets, his signing comes at a significant point in NBA history – he will be the first openly gay athlete to play in the competition. Just having come out the season prior, this milestone is further heightened as it “represents a significant step toward transforming North American professional sports into a more welcoming environment for gay athletes,” the New York Times states.

At an NBA press conference, Collins maintains that “Right now I’m focusing on trying to learn the plays, learning the coverages and the game plan and the assignments. So I didn’t have time to really think about history”. Jason Collins’s story coincides with Michal Sam’s.

Michael Sam is a collegiate football player and considered to be a potential star pick for the NFL’s draft in May. He publicly came out as being gay in an interview with the New York Times in February. His coming out story created controversy, as he could become the first openly gay player in the NFL. An article in Sports Illustrated has drawn out critics, as “eight NFL executives and coaches told SI.com” that “from a purely football perspective, his decision to come out prior to May’s NFL draft will make his path to the league daunting”.

Although both testimonials show a remarkable amount of courage and bravery, do their actions challenge the hegemonic masculinity that is often represented and maintained in sport?

Several studies have been conducted in recent years which highlight this growing issue in sport. Findings from a study carried out by the University of California show a massive phenomenon for athletes to come out during high school and collegiate sporting years. Athletes interviewed were initially scared to come out due to public perception and “saw their sport as being highly homophobic”.

There was also the issue of Segmented Identities where “a compromise [exists] that allows gay athletes to reveal their true sexual orientation (at least once) but allows heterosexual athletes to pretend that nothing has changed”. Prejudice and discrimination is also evident as “women’s athleticism in itself is a contradiction to femininity, so female athletes are frequently assumed to be lesbians”.

Another study from the Journal of Homosexuality showed that supporters of a certain sporting team were less discriminatory (biased) towards the gay athlete that was on their team. This coincides with the recent shift in attitudes towards gay athletes in sport due to social acceptance and an awareness of homosexuality. The study states, “Most of the negative comments regarding gay athletes in professional sports stem from select interviews with coaches and players, rather than reactions from fans.”

With the increase in athletes coming out with their true identities, does this challenge the idea of hegemonic masculinity in sports? Is coming out even a good idea for athletes who are in the peak of their careers? You be the judge.

Other notable sport stars who have come out: