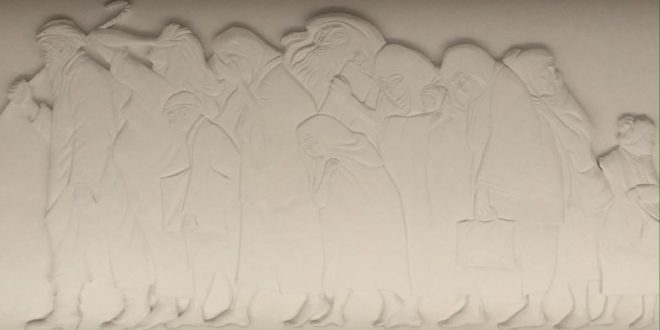 Living in Shanghai’s Jewish Ghetto: the story of a Holocaust survivor

While the last concentration camp was liberated over 76 years ago, our collective memory of the Holocaust is largely confined to the European stage. However, its effects were felt across the world. Carla goes to the Sydney Jewish Museum and interviews Ilse, a Holocaust survivor who escaped to Shanghai.

In 1936, a so-called gentlemen’s agreement was concluded between Germany and Austria, which led to Anschluss, Germany’s Annexation of Austria. Ilse Charny recalls her final year in Austria before seeking refuge in Shanghai’s Jewish District of Hongkou.

One evening, a man came up to Ilse and her parents, and explained that, “he was Jewish and ran away from Germany. He explained to her parents that he needed help. He told them how Hitler treated the Jewish people in Germany. However, all they did was take out their wallets and gave him money. Then, returned to their normal lives thinking it had nothing to do with them.”

Her father, Salm Charny, ran a dentist in a “non-Jewish area, had a lot of friends there and belonged to a club there.” One day, one of the men from the club rang him and warned, “you better go into hiding. They are coming for you.” Eventually, the SS soldiers came “but they could not do anything as he was nowhere to be found.”

Ilse recalled how “If you spoke about Hitler or anything else – immediately there were people around who seemed to be spies. Because of that, people eventually started to leave.” Soon after, her mother was made to scrub the streets of Vienna.

The Journey to Shanghai

In 1939 Ilse and her family took the train from Vienna to Naples, Italy.

“My parents never told me much but I knew that my mother was terribly nervous. For instance, I wore a little necklace with a star of David on it and she took it off my neck before we came to the border. I did not know why but I know she must have been really scared” Ilse recalled.

At the German border, soldiers came onto the train to look through all the passenger’s belongings. While this was happening, her father hid in the male bathrooms. This was because the soldiers “only took men and did not take women.” After 5 days in Naples, they took a Lloyd Triestino ship to Shanghai, China.

Unlike America, Shanghai accepted refugees without a visa. “All you needed was a passport, a taxation clearance and enough money to buy a ticket.” Ilse said. “I’ll tell you what people thought of Shanghai. My father used to go into buildings where you had to show your I.D, and if you were Jewish, they would take you away. My father was caught in one of those buildings one day, and luckily, he had the ticket to Shanghai in his passport. The soldier said to the other; ah! we can let him go. He won’t survive anyway when he goes there. That is how China was understood back then”.

They arrived in Shanghai in the Spring of 1939; Ilse was 12 at the time. The Japanese Imperial Army had been in Shanghai since 1937, but was letting in Jewish refugees in due to the predominantly Jewish Russian diaspora living in Shanghai.

On arrival, Ilse recalls women who were “all dressed up, standing on an open truck, like they were transport animals being taken to camp.” Ilse explained how “the refugee camp was unprepared for the massive influx of refugees, and the crowded living conditions. For two weeks, she and her mother slept in double-bunk beds with curtains that separated them from her father. Ilse’s parents ran into someone who was there before them and showed them where to rent a room in Hongkou. Ilse’s father had brought his dental equipment instead of furniture, which allowed him to hold a profession that did not require talking.

The language barrier made it difficult for many people to work. Ilse remembered how back then “people did not speak English and the second language in Europe was French. Most of them certainly did not speak Chinese.” This meant that many professionals could do nothing and “some people could never leave the camp as they could not make a living. They just could not manage.”  Because of this, suicide was common. Ilse recalled, “There was a lot of sickness in Shanghai. Cholera and Typhoid were easy to get there. It was not that pleasant for most people”.

Formation of the Ghetto

In September 1940, Japan allied itself with Germany as part of the Tripartite Pact. This alliance, as Ilse recalls, was a significant threat.

“Germany had sent a high-ranking official that had built camps in Poland and tried to persuade the Japanese men who oversaw the Jews to build an extermination camp. It was only a matter of sheer luck that the official denied such a request,” llse said. “They said they’d put them in a ghetto.”

The Japanese men locked up part of the area and told residents they couldn’t leave.  8,000 new people were forcibly relocated to the ghetto and joined the original population of 10,000. At the border a Japanese guard declared himself the ‘King of the Jews’. He made leaving the ghetto without documentation difficult.

“There were also some wealthy Jewish people from Baghdad, who would negotiate with the Japanese on behalf of the people in the ghetto.” This allowed for Baghdadis, such as Sir Horace Kadoorie, access to schools in the ghetto. Ilse recalls how this “was a very good school. Because we had teachers, we had everything.” Ilse learnt mathematics from a university professor, and had dance classes with a teacher from The Opera of Vienna. However, in the end Ilse notes that, “The Japanese Army eventually relocated Horace as they were not happy that he was doing more than what they deemed as ‘acceptable’. He was taken to Manila”.

Ilse recalled women who could cook and would “put out a table and cook for men who were alone.” There were many single men in the camp who had fled alone, unable to take their families with them. Some of these men would come home after praying at the Moishe Synagogue with Ilse’s father and would eat dinner with them, delighted to enjoy a home-cooked meal instead of camp food.

Ilse explained, “women started to knit and sell scarves, so much so that it became an economy, especially when it became a ghetto during the war. There was everything there. There was a theatre and there were restaurants. When I say restaurants, it is a big word. It was a room where someone cooked for six or eight people. That made their living. There were certainly no top actors but there were musicians and actors and there were concerts.”

“When I came to Europe after the war, I realised I knew something about culture” Ilse stated. “I was brought up with not only European culture but with so many different cultures. Which was very unusual.” This helped Ilse when she and her husband became importers and would travel to Shanghai. “Unfortunately, a lot has been pulled down” as it is an ever-changing city.” She is still familiar with the place, unlike others whom she had travelled with, who were strangers to the environment making business in the area for her easier.

Today at 93, she has lived in Sydney for the past 72 years and considers herself an Australian. When I asked what her opinion of Germany, she explained that “they felt bad about it a lot more than any other countries and that they have turned themselves around.”

Ilse laughed when I ask whether it was the equivalent of our understanding of living on Mars today. “Exactly like Mars today, that is exactly right.” She explained to me that her “parents had never seen a Chinese person. “I mean this is not like today,” she explained, “it is really hard to explain to young people because the world is so different now”.

When I asked Ilse what she would want her legacy to be, she answered; “A peaceful world, which is the most impossible one as there is so much going on around the world”.

If you want to learn more about the Jewish community and about the Holocaust or want to donate you can here: https://sydneyjewishmuseum.com.au/support/donate-now/

Or head over to the Jewish Museum in Darlinghurst.

It is free entry & free knowledge!

Share
Previous Outrage from students as UNSW Art and Design cancels their only Indigenous Fine Arts course
Next ‘Does the SRC even do anything?’: What the SRC achieved in 2021, and why the SRC election matters