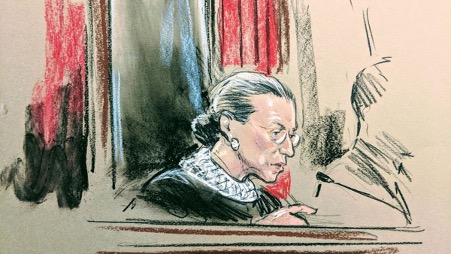 Absolutely extraordinary. I have never met Ruth Bader Ginsburg (RBG). I have read her writings, watched her lectures and listened to her wisdom. However, when her passing was announced, I confess I could feel a tear well up inside.[2] You may perhaps be surprised. What could a 20-year-old in Australia possibly celebrate about this octogenarian? But like others across the world, this octogenarian is a rock star to me. By revisiting the chapters of her story, I hope to illuminate an approach to life that we can aspire towards. Her story centres on extraordinary empathy for others, developed across her listening, friendships and embracing of others. Perhaps in writing and reading this story, by imagining it come to life, we may develop our own sense of empathy. That is why we read stories, to discover something new and profound about ourselves. And that, is RBG’s legacy.

This American Dream began on the 15th of March 1933 in Brooklyn, New York. RBG excelled at everything growing up. Cello, piano, baton-twirling, science, economics, literature to just name a few.[3] She also served on the law review at two universities (Harvard and Columbia), became a mother and graduated first in her class.[4] I am jealous of these achievements. However, those in 1950s America did not feel that way. On entering university, the law school dean asked “why [she] was taking a man’s place”.[5] She was rejected from 41 firms because of her gender.[6] Even the Supreme Court rejected her application for clerkship because she was a woman.[7]

Undeterred, RBG decided to enter academia, becoming the first tenured female professor at Columbia Law School.[8] But, by 1972, Professor Ginsburg received the call.[9] RBG had joined the ACLU, where she “achieved greatness before becoming great”.[10] It was in her experiences as an attorney that we learn the most about her example. The traditional narrative goes that she chose to litigate cases where men were facing sexual discrimination.[11] Quite clever. It illustrated to the aging judges that placing women on a pedestal, in fact, demeans men who choose to undertake those same roles. However, many quarters in America asked how was it possible for this middle-class woman to understand men? Or poorer women? Or those of a different race?[12]

It is easy to forget that the names of legal cases represent real people. In her conversations with clients she would listen and ask about the particular injury they suffered. Yet, she would also ask and listen about their life story. Where did they come from? How was growing up? What did this discrimination mean for their children? This process was important to RBG because through eliciting detail, she could try to recreate the feeling of discrimination and live the experience.[13] Understanding how a person suffers discrimination is only a start but understanding its practical and daily implications is a step into empathy. Discrimination’s true meaning is only grasped when understood as part of a life story, not a moment in life. Through living, imagining, these stories, she narrated a pathway for judges to arrive at the now taken-for-granted value that all are equal before the law. It worked. Almost every single time.[14]

When President Carter assumed office, he took one look at the judiciary and thought they looked too much like him.[15] Intent on diversifying the bench, he nominated Professor Ginsburg to the DC Circuit Appeals Court in 1980.[16] There she became known as a “judge’s judge”, meticulous in detail and unafraid to uphold the letter of the law, which inevitably meant she moved slowly on expanding civil liberties.[17] She was no longer the “flaming feminist” she had been during her years as an advocate. However, she did create flaming friendships – the best of whom was Antonin Scalia.

Then-Judge Scalia was a firestorm. He refreshed the practice of asking questions in oral arguments.[18] He sent “Ninograms” to his colleagues, criticising their grammar, citations and syntax.[19] But most surprising of all, he argued that statutory interpretation begins with the text.[20] Although these practices deterred other judges, it did not deter Judge Ginsburg. As former academics, they began to exchange draft opinions, go out to lunch together and they shared a common interest in opera.[21] Over time, the two would exchange roses, have their families spend Christmas together and they went on holiday with each other.[22] However, at work, the two regularly disagreed on whether the Constitution should be interpreted as originally enacted or as an evolving document.[23]

These friends were so different yet they remain the posterchild of civility. It is not easy to have a calm conversation with someone we may strongly disagree with. Indeed, finding common ground in these polarising times seems out of reach. But RBG would start with the principle that each of her colleagues were coming in good faith, that each shared a reverence for their shared purpose.[24] In addition to that assumption, RBG would often humour and joke with colleagues. It is difficult to dislike someone you laugh and make bread with. Nevertheless, Scalia’s writing and orations tested RBG.[25] When asked how she could tolerate his unkind language, RBG relayed a nugget of wisdom from her mother, “it helps in life to be a little deaf”.[26] But most important, as the Scalia example shows, is that they spent time away from work – learning more about each other. Indeed, Justice Scalia once said “What’s there not to like? Except her views of the law!”[27] She felt the same way of him, I have no doubt. And so should we, of those whom we disagree with intellectually.

In 1993, Judge Ginsburg became Justice Ginsburg. She was confirmed to the U.S. Supreme Court with a now unachievable vote of 96-3 in the U.S. Senate.[28] Over the next 27 years, she authored 483 opinions.[29] Her ameliorative approach to work developed in the earlier chapters of her life continued onto the Court. However, after Justice O’Connor’s retirement in 2006, the Court lunged to the right. The basic issues Justice Ginsburg fought so hard for were aggressively being chipped away.[30] Now a frequent dissenting voice, Justice Ginsburg strove to write opinions that spoke for the ages.

These opinions are rooted in a theme intrinsic to her view of life, law and liberty: the principle of embracing all. As an advocate and on the bench, RBG argued that the remedy for discrimination is to extend the benefits for all.[31] This extension, in her view, achieves equal freedom because it grants all the same opportunity. And, where discrimination is so malign, that law should promote platforms for opportunity. She realised that access to law and justice in today’s America depended on how much money you had.[32] Equal justice means giving the opportunity and choice to the poorest of our society – those without money, power or even the right race and gender.[33] She underscored that justice was not “just for us”. In her words, the law requires that we embrace those left out and not in a cautious way:

“Embracing means not just accepting those left out grudgingly but with open arms”.[34]

By exploring these few chapters of her extraordinary life, there is much we can use for our path ahead into the future. Whether we are lawyers or not, these principles are universal: we must genuinely listen to each other, make friendships and embrace one another. These are qualities RBG carried her entire life to keep alive her sense of empathy. We must do the same if we are to truly achieve equal freedom for each other and ourselves. Although she passed before her vision of equal freedom came to life, she left a legacy we all can share. This legacy is the best of inheritances.

I respectfully celebrate this well-lived life.

[1] Written by Ashraf Olife, student of Law and International Studies at the University of New South Wales, Sydney. I thank my friends, Aroon Parthasarathy, Brianne Perera and Jack Zhou, who were kind enough to review this essay. However, all views expressed and mistakes are mine alone.

Share
Previous The Freedom of Being in Control: How imposed social isolation connotes the idea of loneliness
Next The Ballad Beyond Reading Gaol: Avenge Oscar Wilde