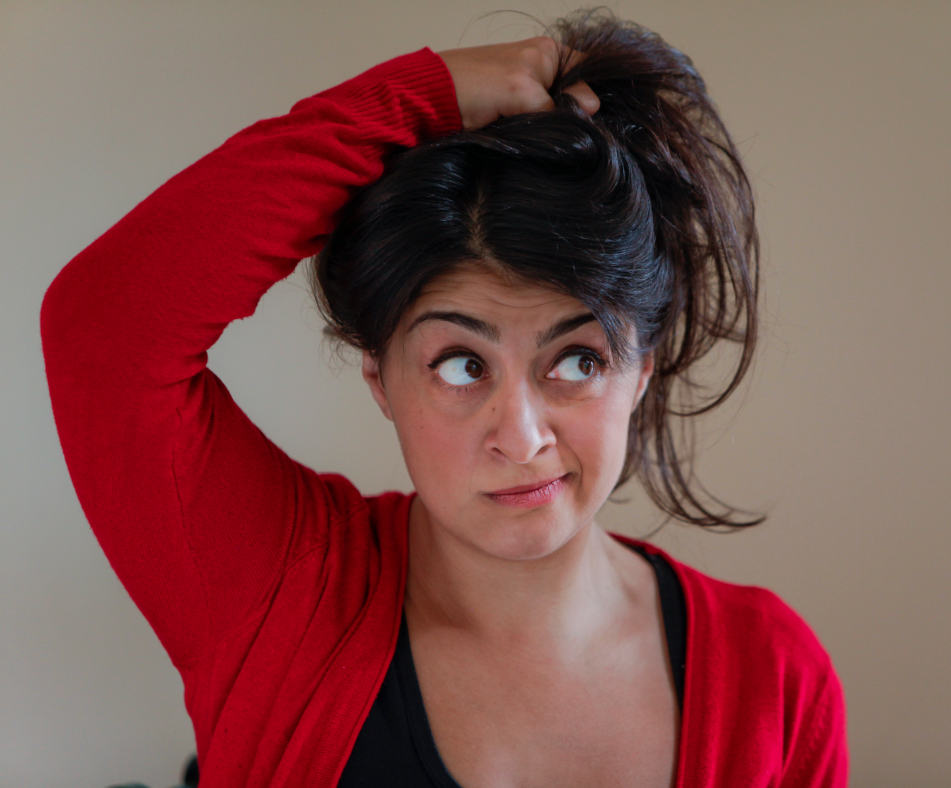 After spending the last few years honing her comedic skills of improvisation and sketch writing, Youssef is fresh off the Melbourne Comedy Festival circuit where her debut solo show “Sketchual Chocolate” received rave reviews. Tharunka caught up with Youssef back on her home turf of Sydney for a chat about her show, a few days after her 30th Birthday.

Youssef jokes about feeling under qualified for her milestone birthday, saying she isn’t particularly grown up.

“I feel like I should own a house or some sort of investment portfolio – and I just don’t own anything at all… A lot of the 30-year-old’s I hang out with a little more adult than I am,” she says.

To make matters worse, Youssef’s two things to do before she turned thirty haven’t been ticked off the list yet.

“They aren’t big life goal things, just little goals, that I really could have easily achieved, but I just haven’t yet,” she says.

Those two things were to go skydiving and to get a tambourine tattooed on her hip.

Whilst she may not have done those things, Youssef has been busy chasing another adrenaline rush, the art of improvised comedy.  Her latest show is combination of sketch, stand up and improv – but speaking with Youssef you can tell her first love is definitely improvisation.

Last year Youssef travelled to the US to study improvisation in Chicago, home to the Second City Theatre company where the likes of Amy Poehler and Tina Fey studied.

“Chicago is a city that just takes it all on board… they are not restricted by different genres they really just go for it. The Second City Theatre Company, I didn’t study with them, but Chicago is known for Second City they do a whole lot of Improv that do sketch that then goes on to become TV – that’s where people like Amy Pohler, that’s were they all trained.”

Youssef says that Chicago has had a massive influence over her comedic preference.

“People like Amy Poelher and Tina Fey are massive influences for the type of comedy that I do. Bu also I really enjoy watching different physical comedians,” she says.

Youssef says that she must have something wrong with her because she constantly chases that adreneline you get from improvisation.

“It’s so liberating – there’s no stakes here we are all pretending to do something, it’s like make believe. It’s like being a kid again,” she describes.

Her latest work definitely references her roots in improvisation – but even Youssef was surprised that her solo show has taken a more personal tone than much of her previous work. There are still characters and sketches, but this time when she improvises she uses herself as material – which was never part of her plan.

“I don’t think [I made it a more personal show] consciously – but coming from a background of improvising, I started out in improv comedy and play writing, sketch and stand up has kind of involved from that. It surprised me that whenever I would go off script when I was on stage, that people connected more with the stuff that was very much about me rather than character based. Laughs were bigger when it was on me or jokes about my life,” she says.

Not only is she baring more of herself on stage than ever before, performing solo feels very different to the comfort Youssef is usually afforded when she performs with sketch groups and improv troupes. She says it was hard being constantly alone.

“Every single day, keeping the energy up is the hardest thing because you are just standing backstage by yourself, and even getting to the venue and then being backstage by yourself Its so nerve wracking and you don’t have anyone there to distract you. It’s just you and all of your self doubt just sitting there waiting to jump on stage,” she explains.

Youssef didn’t really have much to worry about however, as Sketchual Chocolate was a great success in Melbourne, with lots of support from both reviewers and other comedians. She says her audience played a huge roll in the success of the show and that her intimate venue helped her feel more at ease with her first solo performance.

“I feel like I had some pretty incredible audiences and I got a lot of warmth from them, I was in a really small venue – like a 50 seater, I could see everyones faces – so there was a lots of warmth from that.  That keeps the energy up during the show. I had some of the nicest feedback I have ever gotten in my life down in Melbourne, so I am really pumped to do it again in Sydney now.”

If you are interested in giving improvisation a go, Youssef says you have nothing to lose because everyday life is basically an improvisation anyway.

“There is no harm in it. A great improv teacher said to me once, if the words were important than you would have written them down before you started. There is no way you can fail if you just jump up and give it a go.”

Snog – Who do you admire even though you have no rational reasoning behind that admiration?

“I think the guy, the boss from Parks and Recreation. [Fictional character Ron Swanson] He has a moustache and he’s the boss – I just love him. I have the DVD on my bedside table, I am looking at him – that character is just perfect.”

Marry – If you could have dinner with anyone, every day for the rest of your life, who would it be?

“I saw an interview with Geoffrey Rush the other day and I feel like I could listen to him talk forever. I think he just has one of those faces – I love his face. I really like him.”

Avoid – Who are you willing to call out as the poster boy/girl for everything you despise or hate about the world?

“Tony Abbot is way too typical an answer but he kind of embodies everything that I don’t like. We could safely avoid each other, we just don’t have very much in common to talk about – and as clichéd as it sounds I would avoid him. I don’t think he would be too keen chatting with me either.”