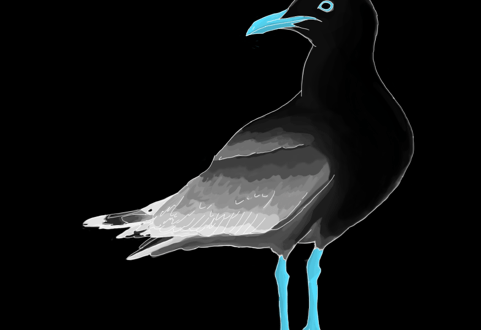 Through the inversion of colour we can see through new perspectives that challenge the notion of black and white to white and black. With this in mind I wish to examine the ways in which our relationship with nature in particular with our native birds is shaped under a colonial perspective and is primarily based on scientific observations that tend to overlook the cultural significance of animals in society. The work has four birds traditionally associated with being pests. The raven, the magpie, the ibis and the seagull. All are native to Australia and all have degrees of black and white within their bodies. Through the inversion of their colour, seen on a black background, our understanding of these pests are challenged by revealing a new reality. Crows – considered pests by farmers, are instead searching for new food sources as their habitat is lost. Magpies considered dangers to society, are rather protecting themselves during mating season to defend from predators, Ibises ravage the cityscape due to the loss of their traditional wetland habitat, and seagulls associated with rubbish and filth are attracted to our waste as it serves their diet and traditional sources are dwindling. Each representing not only a consequences of human activity in Australia, they also represent degrees of whiteness and blackness, with the work examining the ways in which Aboriginal culture has been obscured and defaced by history. How can we view the world from an inverted perspective and renew our understandings of reality.Each of the images are named after the Horses of the Apocalypse – Death, War, Famine and Pestilence which corresponds to the environmental context that these animals have faced and the stereotypes associated with these birds.